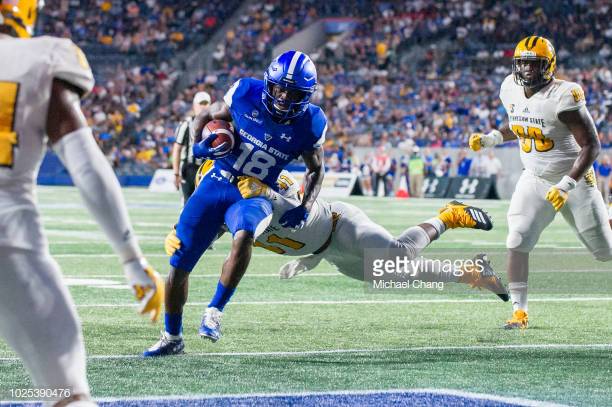 – Changes directions quickly.
– Good short area burst and can stop/stop with quick feet easily
– Opens up his hips well and can contort his body to make difficult receptions
– Good vision, anticipates rushing lanes well including on misdirections
– Makes defenders miss, instead of breaking tackles
– High effort as a run blocker
– Was used as a returner on kickoffs and punts, would occasionally carry the ball on jet sweeps and reverses or triple reverses

– Was not invited to NFL Combine
– Struggles to get away from contact while running routes
– Smaller catch radius due to size, not effort
– Doesn’t come down with many contested throws
– Not powerful blocking or breaking tackles

Lined up split far left on a 1st and 10 with coverage about 6 yards away, he explodes off the line of scrimmage. Once the wideout has his coverage coming towards him, Hart quicks chops his feet and cuts towards the sidelines. The receiver adjusts to the ball in the air, sinks his hips, and forces the first defender to miss in the open field. #18 races down the sideline for a few more yards until he steps out of bounds and his helmet gets flung off.

Split out in the slot on a 2nd and 14, hart gets another free release off the line. He full sprints the first fifteen yards and then adjusts his body to a poorly thrown pass. The receiver catches the pigskin with his body while falling to the ground. If the pass had been targeted better, #18 could have scored a long touchdown instead of a 20 yard gain.

On a 2nd and goal from the four yard line, the wideout gets sent in motion from the slot on a jet sweep. He takes the push pass from his quarterback lined up in the pistol without breaking stride. The receiver races towards the sidelines reading his pulling blockers. By taking the best angle and using good burst, Hart glides into the end zone untouched!

Lined up as a punt returner, Hart catches the ball cleanly at the 11 yard line with not many options. He uses his loose hips to avoid two would-be tacklers, keeps a low center of gravity while reading his blockers. The returner shows good burst streaking down the sideline for a 29 yard gain that should have been a 5 yard effort at best. It was his wiggle, vision, and balance that created the additional 24 yards.