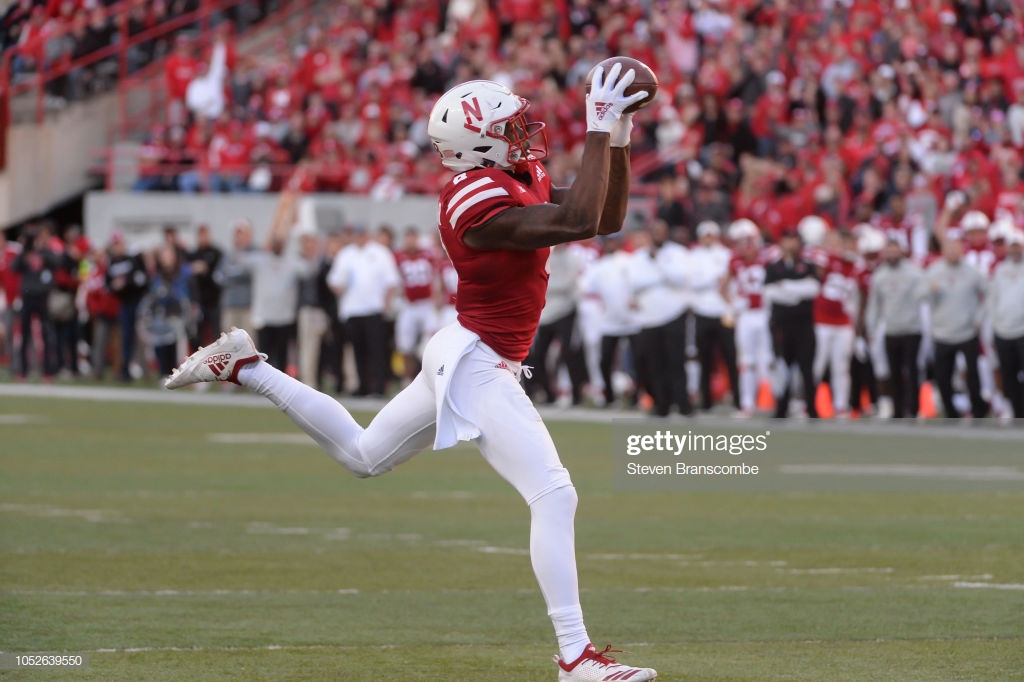 Nebraska’s Stanley Morgan Jr. is flying under the radar so far this draft season. Nebraska is not very well known for receivers as Morgan became the school’s first 1000-yard receiver ever this season but he has put together a crafty resume that has some eye-popping attributes. Morgan has good length at 6’1 and is a very technical and savvy route runner. Considering Morgan’s physical abilities and production while looking at the subpar quarterback play he received, there leaves a lot of optimism for Morgan to continue developing until he hits his ceiling.

Morgan’s route running is hard to ignore as he just makes it look so easy. There are not a lot of moving parts, it is just one smooth, clean motion. Watch how the Nebraska receiver gets a clean inside release above and is able to finish the play by reeling in a slightly overthrown pass with one hand. The receiver is gifted with very soft hands that are very reliable in situations where Morgan can reel in a throw. While he does struggle in physical battles, he is a trusted option when he can see the ball come into his hands.

Playing in the Big-10, Morgan had the opportunity to go up against some top tier cornerback talent, such as Ohio State cornerback Denzel Ward. The matchup above came during a 2017 contest, just months before Ward was drafted fourth overall in the 2018 Draft. For the most part, Ward controlled Stanley but there were a few noteworthy moments where the Nebraska receiver got the best of the talented corner. Ward has great coverage on the play above, leaving little room for separation but as Morgan will show, sometimes size does matter. His 6’1 frame is just enough to subtly push off Ward and come down with the catch for a touchdown.

Morgan is not only a good route runner because of his smooth and clean breaks but he is also a very intelligent route runner. Running routes is more than just running in the direction drawn on a playbook, there is a certain understanding of applying those routes to the coverages shown by the defense. Morgan does a good job of running his routes and understanding the coverage spacing thus leading to him frequently finding soft spots in the zone like the play above. Morgan sells the deep post route well and then at a moment’s notice, stops and finds the soft spot in the zone for an easy completion.

One area that Morgan struggles in and it is very evident is his ability to handle physicality. Whether he gets pressed at the line or has to beat a physical corner down the field, Morgan’s ability to work through physical corners is a huge working area for him. Too often he is out muscled or re-routed down the sideline and taken out of position to make a catch. On the play above, he is pinned to the sideline and has no area for his quarterback to place the football.

Now not all hope is lost for Morgan and his ability to handle more physical corners. Once again, here is Morgan up against Denzel Ward and a flash of hope is displayed. Watch how Morgan uses his size and strength to separate from Ward at the top of the route despite Ward mugging him down the field. It is not that Morgan cannot handle physical corners or press coverage but rather that he has not put it all together yet. With his size and strength though, there should be optimism that he is able to improve in this area.

Morgan has flown under the radar compared to his other classmates but he is an exceptionally well route runner. While he does not have the athleticism or raw speed to be a vertical threat, his polished route running makes him a short area or middle of the field threat. His route tree showed versatility, from outs, digs, hitches and screen passes. While his ceiling may not be as high as the top receivers in this year’s class, Morgan does bring a lot of very good traits that could see him become an adequate receiver at the next level. The Nebraska receiver’s route running could make him an intriguing option in the slot.