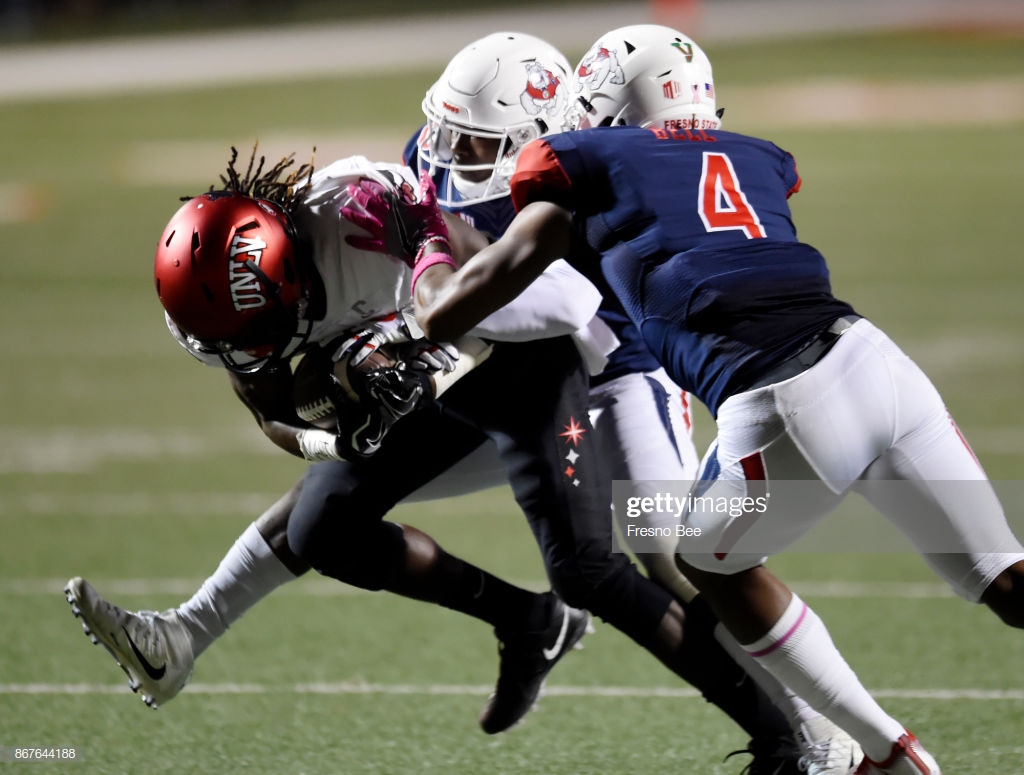 – NFL size and frame, well-built
– Aggressive with “want to” as a tackler, sticks face in the fan and doesn’t shy away from contact
– Excellent ball skills, tracks the ball well in the air, routinely made big plays in the passing game
– Closes on the ball quickly and normally takes good angles
– Good leaper and times his jumps well, able to contest downfield
– Versatile, moved around the defense
– Run fits are sound and doesn’t get himself out of position
– Good effort, high energy player
– Decent starting experience and moderate production
– Underclassmen and flaws are partially technique-related, correctable with right coaching

– Struggled mightily as a tackler and needs a ton of work on his technique, aims far too low, doesn’t hit what he sees, and right now, a cut-down tackler than a refined one who drives through
– Lack of tackling technique hurts his hit power, doesn’t stop the pile the way a safety should and backs able to bounce off/fall forward too often
– Not an elite athlete, can get outrun on verticals and against the run even when he has the angle
– Bit stiff-hipped in his turn out of his backpedal
– Didn’t play much man coverage in college
– Could struggle to find NFL fit, not a great athlete in space, not a trusted enough tackler near the LOS

Bell is a prospect I’ve been going back and forth on. There’s a couple things he does really well. And several more where he’s struggling. As always, let’s start with the good.

He’s a safety with plus ball skills. Good start in my book. High IQ, trusts what he sees, understands route concepts and where the QB wants to go with the football. Takes good angles to the ball and closes quickly.

I like the intensity and passion he plays with. Falls more on Mike Tomlin’s “woah” meter than “sick ’em.” Takes pride in filling the alley and making plays near the line of scrimmage.

But man, it’s been a couple years since I’ve seen a safety like Bell miss so many tackles. In the four games I watched, which were spread out over the course of the season, he missed at least nine tackles, according to my notes. It’s in large part due to a terribly low tackling angle that makes him so vulnerable to missing. It litters his tape. Several examples.

It hurts him hit power too. 1st and 10 run. Bell is flying in to clean things up but doesn’t get a good shot. The back bounces off and falls forward for an extra yard. That’ll be killer on 3rd down.

His NFL fit is difficult to project, too. Can he play SS, like he mostly did in college? Maybe but he’ll have to become a much more consistent tackler and he didn’t play much man coverage at Fresno State. His ball skills suggest a move to free safety but is he a good enough athlete? There’s also the worry of him missing so many tackles as the last line of defense.

The good news is I think you can clean up his tackling woes. Get his angle higher, teach him to break down, wrap up, drive through. Do that and you’ll have a potential starter. But it’ll take time and a coach who can work with him.

Games Watched: at Minnesota, at Nevada, at Boise State, vs Arizona State