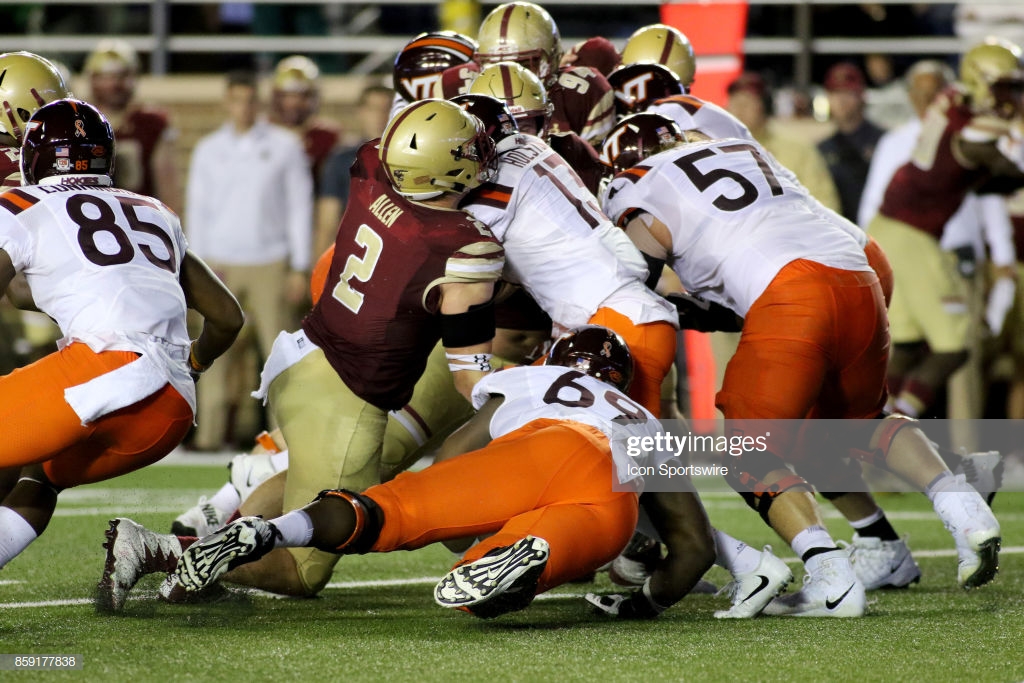 – Thick build with elite level length (34 1/2 inch arms), looks like an NFL player
– Quick, efficient and nuanced hand use, really excels and advanced in that area of his game and helps him shed blocks as a pass rusher in the run game
– Powerful initial strike and proper hand placement, puts jolt into tackles on power moves and creates a push
– Above average athlete who moves well and has good change of direction skills
– Shows quick first step off the ball and capable of one-gapping, difficult to reach block in the run game
– Smart pass rusher, has plenty of ways to win and counters, reads tackle’s set and capable of attacking half man
– Able to bend the corner, bull to rip/dip is his best move, flattens and turns upfield at the junction point
– Strength at the point of attack against base blocks when he plays with correct technique
– Good effort player hungry for the football, finishes plays and gets the ball out
– Versatile, played both end spots and doesn’t appear to be one-hand dominant, made an impact on each, kicked inside on third down, has the quickness to beat guards along the interior
– Experience in a 3-4 and 4-3 scheme, college system has hybrid, played a little with his hand up and occasionally asked to cover back in coverage on flares/swings
– Smart player who bats balls down at the LOS when he can’t get to the quarterback
– Asset on special teams, on field goal team and capable of getting blocks
– Productive player who racked up good numbers

– Will struggle against some power/gap schemes against the run, needs to keep shoulders square, eyes on the football, and will get turned out and washed
– Won’t have much success against double-teams maintaining his gap
– Occasionally loses his run fit
– Not an elite athlete
– Sometimes jumps the snap too early, gets overaggressive, and prone to going offsides
– Didn’t put up gaudy sack numbers in any one season

Allen is one of those players where you almost wished the Steelers had a glaring need along the defensive line. I will admit I don’t think he’s an ideal scheme fit in Pittsburgh, we’ll get to that, but he’s an excellent prospect I’m really excited to talk about.

The best thing I like about Allen is his hand use. Very advanced, very refined, very positive across the board. See it in run and pass. Watch him rip through this block by the left guard in the run game. Makes the tackle.

And his rip move here versus the right tackle, his favorite to win the edge against tackles. Forces the QB to climb and escape.

And how he sets up the Temple left tackle. Inside move and then works the outside. That’s attacking the linemen half-man. Attacking part of his body so it’s easier to get around him than trying to go down the middle.

When he gets his chance, the dude finishes plays. Check out the effort here. Pokes the ball out.

The issues I see didn’t pop up often. Like I wrote in the “Bad” section, his run defense needs some work. Can get stuck on blocks, get washed, moved around and lose his run fit a little easier than he should. Struggles more against power/gap schemes than zone. Against zone, he can flow, stay ahead of the linemen reaching, and use his hands to shed and rip the gap. Not as successful versus man schemes.

I did have to watch more of him than the typical prospect I study. While the tape I saw were very good, it came with a caveat. He faced some baaaaad, inexperienced tackles. Versus Temple, the right tackle he saw most of the time was a true freshman. Against Florida State, the right tackle – eventually benched – was a sophomore who hadn’t played the previous two years. But he showed success on both sides in each of those games and I saw enough of his tape overall to be encouraged by his play translating, rather than a senior just going around bullying some freshmen.

One draft guy on Twitter loosely compared him to J.J. Watt and I get that. A poor man’s version, no doubt, but I can see the similarities. Watt had an amazing three cone time, 6.88, and I think Allen can break the seven second mark. More realistically, because I doubt Allen ever becomes a 15+ sack guy like Watt, I see the next Carlos Dunlap. Good, not great pass rusher, but a very good player. Best fit is the strongside end in a 4-3 scheme. Complimentary pass rusher and well-rounded game. If this was 10 years ago and 3-4 teams like Pittsburgh played a lot of base and actual five technique, the latter rarely happens today, I’d like Allen in that scheme. But since the DEs wind up playing one and three tech, where they’re facing double-teams and have a lot to deal with against the run, Allen isn’t an ideal fit.

Games Watched: vs Virginia Tech (2017), vs Temple, at NC State, at Florida State, vs Syracuse