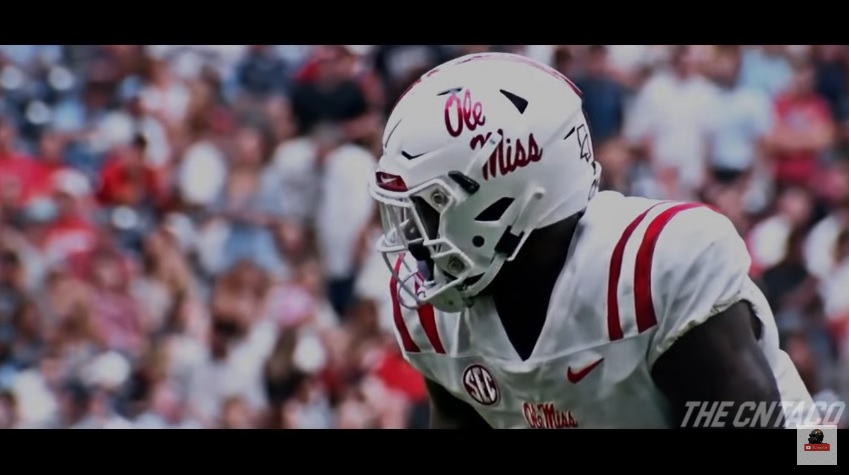 – Incredible frame that is rocked up; might be an alien, can’t confirm
– Varied releases against press coverage that gets him off the line of scrimmage quick and clean
– Huge catch radius and makes one-handed catches look easy
– Tracks the football well down the field
– Powerful runner after the catch and has long strides to run away from defenders
– Plays above the rim and lets you know about it
– Finds another gear when the football is in the air

– Struggles with concentration drops; has questions about his hands in general
– Doesn’t appear to put much effort into run blocking on the perimeter
– Lacks attention to detail in route running, especially breaking into the middle of the field; tends to round off routes, allowing defensive backs to stay in phase with him
– Operated mostly vertically at Ole Miss, hindering his route tree
– Limited career production; just 67 career catches
– Missed nearly two full seasons due to a foot and neck injury

– Ran a 4.33 40-yard dash at the 2019 NFL Combine, and added a 40.5-inch vertical jump and 27 reps on the bench press
– Hauled in just 67 career catches at Ole Miss over three seasons, totaling 21 career games; added 14 touchdowns in 21 career games, finishing with 1,288 receiving yards (18.3 yards per reception)
– Missed most of freshman season with a foot injury; missed final 5 games in 2018 with a neck injury
– Registered 1.6 percent body fat at the Combine

Folks, I’m really not sure if DeKaylin Zecharius Metcalf is human or an alien, but what I do know is he is a physical freak that happens to be darn good at football, production numbers be damned.

If players were drafted on body makeup alone, Metcalf would go 1.1 in late April. He looks like a linebacker, yet somehow blazes a 4.33 on the field and stands nearly 6-feet-4.

He easily the freakiest of freaks at wide receiver that I’ve scouted in the 6 years I’ve been doing this.

Injuries suck and there’s really no way to guard against them, so it’s hard for me to knock Metcalf for a season-ending foot injury his freshman year and then a neck injury suffered last season against Arkansas, ending his season early.

What you can scout though are his traits and his production. The latter certainly isn’t there as the 67 catches in 21 career games (3.2 catches per game) in a spread system at Ole Miss. However, his tools are insane, starting with his catch radius.

Against Southern Illinois early in the 2018 season, Metcalf made one of the best touchdown catches of the season in the SEC in the back corner of the end zone.

Metcalf is really good at using his strength to play through contact here, shedding the corner in the back of the end zone before exploding skyward for the spectacular toe-tapping touchdown inside the back left pylon.

When he highpoints the football, there’s really nobody that can guard him.

This is against Kentucky’s Lonnie Johnson – another draft hopeful – in the 2017 season. Metcalf has really good awareness on the field when he’s in the end zone. He’s able to get his foot down here for the touchdown, while skying over the long, lanky Johnson for the touchdown.

This is by far one of Metcalf’s best reps on tape I’ve seen. If he can do this more often he’s going to be incredibly successful in the NFL.

That huge catch radius also comes in handy when he has to try and make the one-handed catch. He can reach for pretty much anything with his 34 7/8-inch arms.

These silly catches that Metcalf makes look ridiculously easy. He has nearly 10-inch hands, so his paws swallow up the football. These catches are normal for him.

You’ll notice in a lot of these clips that Metcalf is going deep in most of them. That’s largely due to the way Ole Miss used him, asking him to operate vertically more often than not. However, I saw a guy who has the ability to get in and out of his cuts in routes with ease, and has the athleticism to become a strong route runner. He just needs refinement and attention to detail there.

When he does catch the ball at the end of short-to-intermediate routes, he has the speed and stride length to run away from defenders.

This is a 5-yard out route that he turns into an explosive play by forcing an early missed tackle and then blazing down the sideline. Check out the strides on the boundary. Not many guys have strides that long.

Overall, I think Metcalf is a lock for the first round, and should go in the top 10, regardless of medical red flags or lack of production. No, he’s not former Chicago Bears top 10 pick Kevin White, who was a bust due to injuries alone. Metcalf is a physical freak that came from a loaded WR room at Ole Miss and had a shaky system. Should he land in a good situation he will out-produce his collegiate career right away.