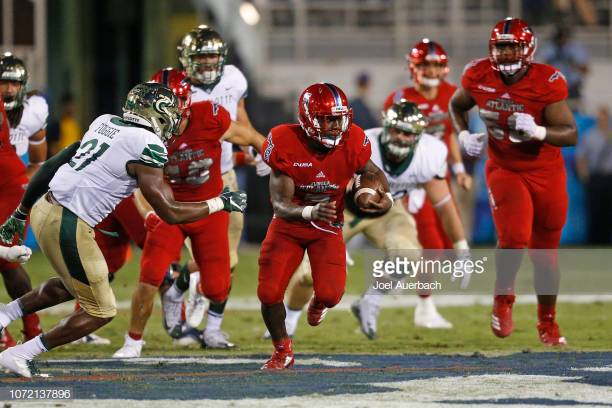 – Borderline elite vision for the position and consistently sees cutback lanes before they develop
– Incredible contact balance that lets him stay upright as defenders bounce off of him
– Nickname is “Motor” and it shows on film; refuses to go down on his runs
– Lightning-quick jump cut that he breaks out a ton near the line of scrimmage, allowing him to bounce the play without losing speed
– Great footwork for the position; gets up to top speed in a hurry when he sticks his foot in the ground and turns up field
– Well-proportioned frame with a lot of power packed into it

– Needs to learn to take what the defense gives him from time-to-time; can’t always hit the home run
– Very little experience in pass protection and won’t use his hands in that role; would rather cut block
– Rarely used as a receiving back, so hands are hard to evaluate, as is his route running ability
– Heavy, heavy workload in college; how much tread is left on the tires?
– Struggled against Power 5 opponents (Miami in 2016, Wisconsin in 2017, and Oklahoma in 2018) averaging just 3.5 yards per carry in those meetings; is production a product of competition level?
– Does not possess great long speed and will get run down on big plays by better athletes at the next level

– Named an AP All-American, becoming FAU’s first ever consensus All-American
– Finished 3-year career with the Owls gaining 4,299 rushing yards on 714 carries, scoring 70 touchdowns on the ground
– Added 51 catches for 397 yards and 1 touchdown in 38 career games at FAU
– Averaged just under 123 total yards from scrimmage in 3-year career, leaving FAU as best running back in program history
– Will turn 22 years old in first year in the NFL on Sept. 3.
– At one point at FAU, scored a touchdown in 19 straight games

One of the most productive running backs in college football over the last 3 years, Florida Atlantic junior running back Devin Singletary has an argument for the top running back in the 2019 NFL Draft.

A mixture of Buffalo’s LeSean McCoy and Indianapolis’s Marlon Mack, Singletary pops off the tape consistently in Lane Kiffin’s up-tempo attack with the Owls.

The Florida native has the ideal build for the position with a sturdy 5-foot-9, 200-pound frame that allows him to withstand a heavy workload over the last three years that saw him touch the football nearly 800 times.

Despite the heavy workload, Singletary is an elusive back that was able to avoid the big hits time and time again, while also being able to shrug off tacklers with ease throughout his career.

Against Oklahoma in 2018, Singletary struggled to put up his typical numbers, but he flashed at times against the Power 5 school. Check out this run early in the game against the Sooners.

I’m very high on Singletary’s vision and ability to bounce his runs outside with a shuffle of his feet without losing any speed. When he gets going, his contact balance is insanely good, as you can see at the end of this run. You can try to go high or low against him as a defender and it doesn’t really matter; he’s so strong.

While he can run through tackles with the best of them, he’s very elusive and makes people miss in a phone booth.

This run is from the 2017 season against Middle Tennessee State at home. What an incredible job not only staying inbounds here, but also make a number of defenders miss despite being hemmed in on the sideline. To score on this play showed me most of what I needed to see from Singletary. He’s going to be very good at the next level.

It doesn’t have to be in the open field either for him to elude tackles. Time and time again on tape I saw Singletary make defenders miss in the backfield seconds after getting the ball. Here against North Texas in 2018, he makes 3 defenders miss in roughly 3 yards, leading to one of the better touchdowns of his career.

He doesn’t look all that explosive, but he’s a quick-twitch back that has lightning-quick moves once he touches the football.

I am a big, big fan of his footwork, especially on jump cuts.

Look at the way he jump-cuts to his left in the hole and finds daylight for the touchdown. He’s able to explode laterally and gain ground without losing any speed. That’s rare.

One thing that Singletary really needs to clean up in the NFL is his propensity for trying to always hit the home run. He needs to learn to take what the defense gives him, especially when he’s so powerful and falls forward often at the end of his runs. A 3-yard gain can be just as effective in the long run as a 10-yard run, but a 3-yard loss can be killer.

This is what I’m talking about. You can see a lane in the middle of the Louisiana Tech defense here in 2018 that would have given Singletary at least a positive gain. Instead, he hesitates and tries to bounce around looking for the home run lane. It results in a big loss. Florida Atlantic was forced to punt a few plays later because they couldn’t dig out of the hole.

Now, it’s not always Singletary’s fault, but when he gets on a roll and somehow gets bottled up near the line of scrimmage, he needs to learn to lower his shoulder and barrel forward for whatever he can get, rather than trying to elude everyone and put 6 points on the board.

Outside of that, I rarely saw Singletary in pass protection, and his abilities as a pass catcher were rarely called upon. He’s flashed strong hands at times, but he looks uncomfortable as a route runner. That can change at the next level, but if he can’t hold up in pass protection, it’s unlikely he’ll be on the field in passing situations.

Despite having nearly 800 touches in college, Singletary is just 21 years old and looks like one of the best running backs in the 2019 draft class, if not the best. With his production and impressive tape, there’s no reason he should be on the board past the third round.

Whichever team takes a chance on the non-Power 5 product is going to get a very talented running back that will make an impact right away.