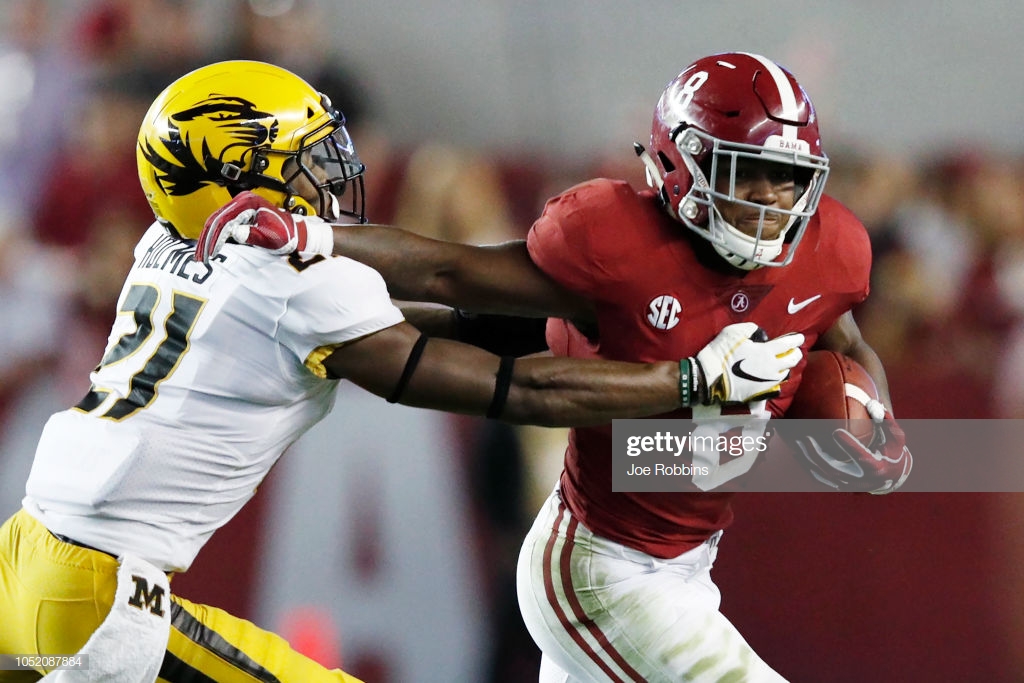 – Old-school mentality for the position; wants to punish defenders on every run
– Workhorse running back late in games, helping Alabama salt away wins
– Explosive lower half with quick burst in and out of his cuts
– Physical pass protector that looks to rock free rusher; drops his pads well and keeps his eyes up
– Showed major improvements as a pass catcher in final year; able to track the ball well down the field and plucks balls out of the air away from his body
– Very little hesitation behind the line of scrimmage; hits holes hard and fast
– Terrific contact balance for the position with a power-packed frame; always keeps legs churning

– Limited production as part of three-headed monster at RB throughout his career with the Crimson Tide
– Struggles to escape low contact at times; can be tripped up by smaller defenders; started to see defenders going lower as season progressed to try and counter Jacobs’ power
– Does not have breakaway speed and likely won’t hit many home runs in the NFL
– Has had issues with nagging injuries throughout his career, including sophomore year
– Won’t outrun many defenders laterally; needs to be moving north/south initially to get a head of steam going

– Selected as the Most Valuable Player of the 2018 SEC Championship Game against Georgia
– Contributed in numerous ways as a junior, totaling 15 touchdowns (11 rushing, three receiving, one kickoff return) to rank eighth in the SEC and his 11 rushing scores tied for seventh in the league
– Finished three-year career at Alabama with 40 career games played, 299 touches, 2,062 yards from scrimmage, 21 TDs
– 64 of his 140 touches as a junior went for a score or a first down for Alabama (46 percent)
– Former 4-star recruit that developed late in the process and chose Alabama over Missouri in-state Oklahoma

Coming into the 2018 season, Alabama was expected to have the best running back in the 2019 draft class, bar none. The expectation was Damien Harris, who spurned the NFL in 2018 to return to school, would cap off a great career with the Crimson Tide, put up big numbers, lead the Tide to another National Championship, and then enter the NFL Draft as the clear-cut RB1.

Joshua Jacobs had other plans.

The former 4-star recruit that committed to Alabama late in 2016 and was buried on the depth chart is the ultimate rags-to-riches running back in this class. Jacobs had to claw his way up from No. 5 on the Tide’s depth chart to start his career just to work his way into a 3-man rotation with Harris and 5-star recruit Najee Harris.

Quite honestly, Jacobs was the best one out of the bunch in 2018 and is my clear-cut RB1 in the 2019 NFL Draft, right ahead of Florida Atlantic’s Devin Singletary.

Jacobs is a throwback running back that loves contact and dishes out a terrifying amount of punishment on his runs.

In the rivalry matchup against Auburn last season, Jacobs had hate on his mind, dishing out beatings to defenders nearly every time he touched the football. He does a great job of being patience here and bouncing this one outside to daylight. Instead of casually strolling out of bounds like most running backs do in today’s day and age, Jacobs drops the hammer on the Tigers defensive back, sending him flying.

I love that mentality in running backs. Football needs more guys like Jacobs to come back into the picture.

You’ve all surely seen this one as well by now.

That’s a Mack Truck rolling downhill with no brakes. The Oklahoma defensive back was hurt on this play, so I don’t want to gloat here, but what defender wants to step in front of Jacobs in the open field like this knowing he has the mentality of Marshawn Lynch?

Truly, it’s hard to find things Jacobs doesn’t do well. Some of that has to do with the limited touches he had at Alabama over three years, but he’s really just a complete back that’s as NFL ready as you can get.

He’s a dynamic pass catcher that tracks the ball well and gave Alabama flexibility to put him all over the field. I like the way he is able to stay with this football in the air down the seam against Auburn, and then find his way into the end zone after the catch.

When not punishing guys, he can send defenders flying with jukes, especially cuts on a dime.

That’s nearly a 90-degree angle cut on a dime while moving at near full speed. Clemson’s A.J. Terrell doesn’t even stand a chance at defending it. Very rarely do you see these types of cuts out of running backs, but Jacobs has this in his toolbox.

Even when he’s not running routes, he’s going to be on the field due to his abilities in pass protection. He relishes the opportunity to stand in there in front of his QB and strike free rushers. He drops his pads low and keeps his eyes up, striking guys right in the numbers. And it’s not just one hit and move on; he looks to finish people off.

Watch his head here, since you can’t see his eyes. He determines who the free rusher is quickly and he’s under control in doing so.

I’m a big, big fan of Jacobs and his abilities. Now that he’ll be able to get out of the 3-RB rotation at Alabama and hopefully be the true No. 1 guy for his franchise in the NFL, we’re going to see the Oklahoma native put up some eye-popping numbers as a dual-threat guy.

I could see Jacobs going late in the first round to a place like the Oakland Raiders at No. 27 overall, but ideally he slides to the start of the second round and latches on with the Tampa Bay Buccaneers or Buffalo Bills at No. 39 and No. 40 overall. That’s the ideal landing spot for Jacobs, in terms of overall pick.