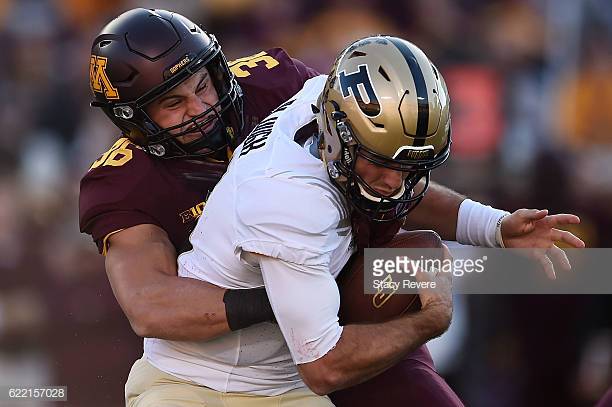 Blake Cashman certainly has been a riser as of late, especially after the combine where he posted an impressive 4.5 40 and 3 cone time with 6.95. Cashman certainly has the athleticism that the NFL looks for in its linebackers, although he certainly does have injury concerns due to the fact that he had not one, but both of his shoulders operated on after the season. Regardless, he was the leader of the Golden Gophers’ defense and flashed just like it on tape as well.

The very first thing that stuck out on his tape was his aggressive, yet disciplined play. He has no issue sifting through the trash of a defense as he does here due to good leverage and the ability to push the blocking scheme off of him due to his leveraging of his positioning. As such, Cashman makes an easy tackle. It’s a good thing that he can sift through the trash well, because his frame, which is raw, is going to have to fill out in order for him to get off of blocks once he is reached. In addition to that, his hands are just not active and seem to fade out once he is locked up.

Cashman reads plays right off the snap due to key indicators and plays fast and aggressively because of it, or in this play, he plays disciplined and processes the zone well and scrapes over the top of it to fill the comeback lane. His high football IQ is always on display with how well he can read and react to the ball in general.

In addition to those smarts, Cashman has all the athletic tools that a modern day ILB is supposed to have. This is not some thumper BUCK ILB, this a prototypical, sideline-to-sideline MACK ILB. He has fluid lateral motion, as shown above, where he ranges over easily because of his processing, speed, and quickness. This is impressive stuff. His aggressive play can get him into trouble at times, as he can over pursue guys and take poor angles to the ball carrier.

What separates Cashman from a guy like Joe Giles-Harris is his ability in coverage. In man coverage, he can run with slot guys and flip his hips to see the ball and make a play on it. In zone coverage, he understands depth and responsibility, but has fantastic closing speed to make plays like that above. He processes the route concept and gets off the wheel to the drag and holds the WR to a minimal gain.

If there had to be a cherry on top to Cashman’s game, it would be his aggressive play and ability to blitz. He is a tenacious blitzer, and running back Mike Weber found that out when Cashman ran right over him. Cashman is certainly an ideal LB to run stunts with to disrupt a play, and we all know Keith Butler absolutely loves to do that.

Cashman’s ceiling is higher than many people will tell you. In a weak ILB class, he brings smart play combined with athleticism while still having significant upside. If he does not start right away, Cashman certainly has the ability to be a fantastic special teams producer due to how well he moves in space. He will be able to find a team easily and should go even higher than before after his tremendous performance at the combine.

Games Watched: vs Ohio State, vs Northwestern, vs New Mexico State, vs Nebraska, vs Fresno State