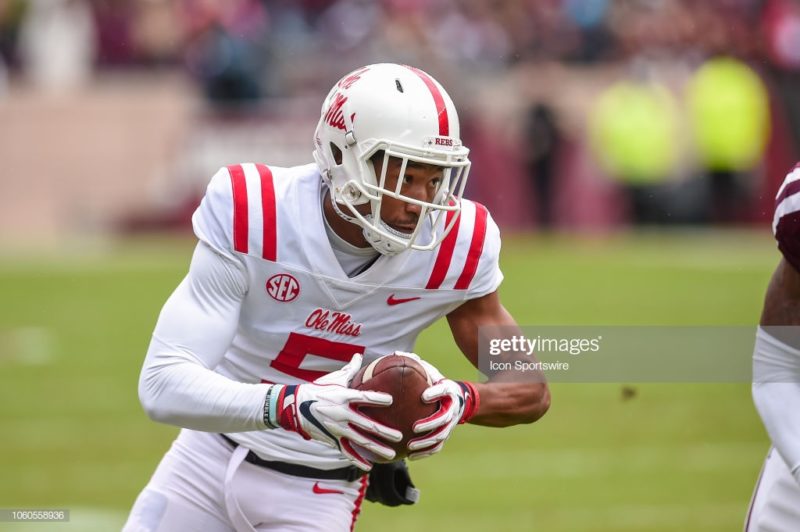 Whoever is doing the recruiting of pass catchers at Ole Miss should be proud of themselves. In this draft you have D.K. Metcalf, A.J. Brown, tight end Dawson Knox and DaMarkus Lodge (#5).

Lodge is the least heralded of the three wide receivers in this group but was an integral part of the offense for the Rebels. He played on the outside and played mostly on the right but was used on both sides of the field. He has a good release off the LOS and will vary his release versus Press coverage using hesitations, rips and a long arm to keep defenders off of him.  He has good acceleration to eat up space versus off coverage and will get the defender to turn his hips and commit before dropping his own hips and cutting of his route.

He was used in the whole route tree running screens, slants and hitch routes in the short area, digs, drives and outs in the intermediate and a lot of go routes in the deep area. Lodge shows good awareness vs Zone coverage able to find the soft spot, sit down and show the QB his numbers. He didn’t create a lot of space in his routes other than routes working back to the QB.

Vs Arkansas, he lined up to the right in the Red Zone. He uses a subtle push off in the end zone to create space, secures the ball against his body on a very rainy night for the TD.

He has good body control and ability to adjust to balls around his frame able to twist on back shoulder throws and get low on balls around his ankles. His hands were solid flashing the ability to pluck the ball but there were several double catches where he seems to fight the ball a bit and he uses his body often. He didn’t create a lot after the catch lacking the lateral agility and elusiveness to make guys miss particularly on screen plays.

At Texas A&M, he’s lined up wide right on a comeback route. As the QB rolls right he works back toward him and goes low and reaches inside to make a tough catch.

Vs Texas Tech, lined up on the right running a go route. He displays good body control and sideline awareness to go up and get the ball and get his foot down inbounds despite the defensive pass interference.

Vs South Carolina, lined up on the right he gets an inside release and shows strong hands on a tough contested catch over the middle

Vs Mississippi State, lined up on the right he show body control to twist for this ball and high points the ball.

Vs South Carolina, he lined up stacked to the right. It’s a screen his way and while it’s a solid gain there not a lot of suddenness or agility to make a defender miss.

He’s a good blocker working with a good balanced base and getting his hands on the defenders to mirror and control him. On big runs by the offense you’d often see the ball carrier running by his block.

At Texas A&M, he’s lined up wide right starts to sell the go route. Sees the RB breaking toward him gets his hands on the DB, turns, drives and sustains.

Overall, Lodge is a solid receiver. He can be used in the whole routed tree but best suited for a possession type role with occasional deep shots.  He didn’t really stand out to me in any particular area but should find his way on to a roster. It will be curious to see how he tests as the broadcasts labeled him as a speed guy. With improvements in creating separation and working on cleaning the double catches his ceiling is probably a WR3 who can fill in when a starter is down.