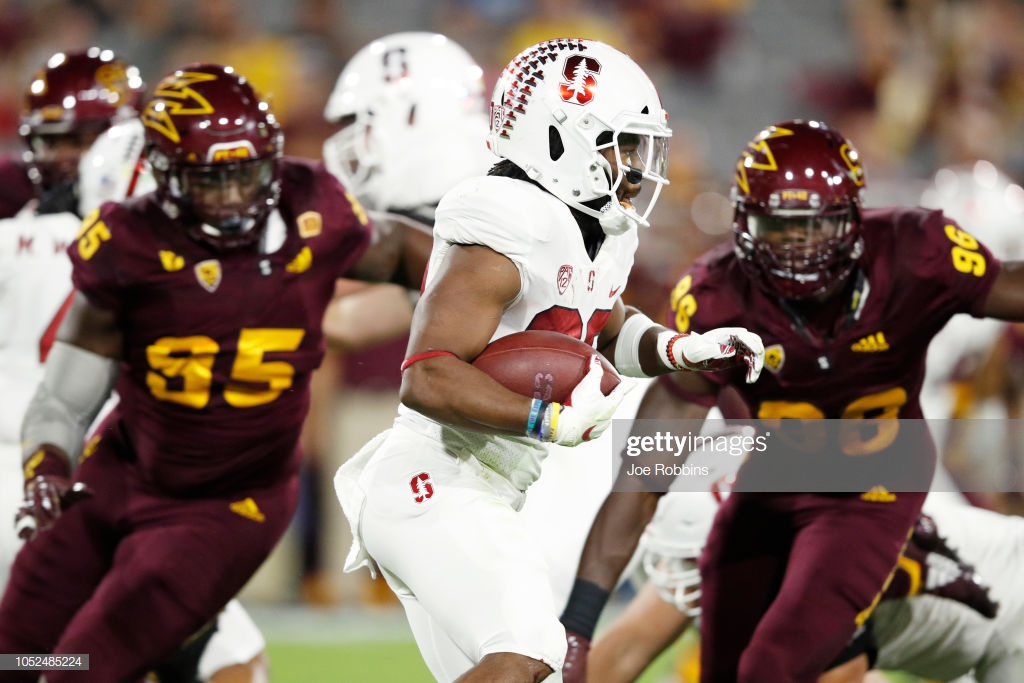 – Home-run hitter with clear game-breaking speed
– Makes himself small and slips through narrow gaps
– Great patience and vision to let blocks set up
– Light, quick feet that allows him to bounce around and avoid big hits
– Willing pass blocker that isn’t afraid to stick his face into the fan
– Highly-productive back at Stanford throughout four years at Stanford

– Rail-thin frame; rarely runs through contact and doesn’t appear to have much power
– Major durability issues throughout his career
– Needs a runway to be effective, which is why you see Stanford pitch the ball back to him after the under-center snap
– Lacks anchor strength to hold up consistently in pass protection
– Limited pass catcher that was rarely used through the air

The 2017 version of Bryce Love likely would have garnered at least an early Day 2 selection in the 2018 NFL Draft. Instead, Love went back to Stanford for his senior season and took a step back, while also suffering a torn ACL in the Cardinal’s final game that will ultimately hurt his draft stock.

When you put on Love’s film, it’s clear how talented of a running back he is with his game-breaking speed and his ability to make defenders miss in a phone booth, but he’s so small for the position – in terms of density – and really struggled to stay healthy his final two seasons in a run-heavy scheme.

When given the chance to win in space, Love can make defenders miss consistently.

This is where you have to make your money as a running back, one-on-one with a defender in the hole near the line of scrimmage. Love wins with ease, spinning out of the Notre Dame linebacker’s tackle on his way to a splash play for the Cardinal.

I’m a big fan of the way Love sets up his blocks. He’s patient when he needs to be, gets small behind his blockers, and can explode late to get past defenders.

Against Washington in 2017, Love is patient once he gets the handoff, shrinks behind his blockers and is able to pick his way to daylight for the touchdown. Watch the feet there too. His feet are lite and quick, never getting too ahead of himself.

With his diminutive stature, he has a good center of balance for his running style and can bounce of tacklers like this and find a way to stay on his feet. That being said, he will go down quite a bit on first contact and doesn’t always have the want-to when it comes to fighting for extra yardage. He’s going to have to develop that part of his game into a consistent strength for him to hold down a role in the NFL.

Realistically, Love’s role in the NFL is as a change-of-pace back that can hit the home run and flip the game’s script in a hurry for his team.

Stanford was getting its butt kicked against Notre Dame in 2018 and with one carry Love changed the game and got Stanford back into it.

I get that he has a massive hole to work with here, but watch Love’s feet right before he gets up on his blocker. He has a quick shift that allows him to transfer his weight to the left without losing any speed. With his sprinter background, Love can carve out an effective role as the change-of-pace guy and make plays like this.

Aside from his home run ability, Love won’t be a workhorse back that should get more than 10-12 touches a game, simply due to his build. For him to be as effective as possible week-to-week, he has to have his touches limited and have things schemed up for him. He’s not a gadget player by any stretch, but he needs to be put in situations to succeed. That means getting him on the field to run outside of the tackles or just off-tackle. That’s where he works best.

Love can get some work in pass protection, but he needs to add some strength to be at his best there. The willingness is there; now his next coaching staff has to coach him up there.

As a receiver, the production and the usage just aren’t there. He’s solid on simple swing routes that work as an extended run game, so he could succeed doing that. But he’s just not a dynamic back in the passing game like some of the top backs in this class.

With is durability issues and coming off of ACL surgery, on top of a decline in tape from 2017 to 2018, Love should come off the board in the middle of Day 3, right in the middle of the sixth round. He’s a guy worth taking a chance on as a No. 2-3 back on a good roster.