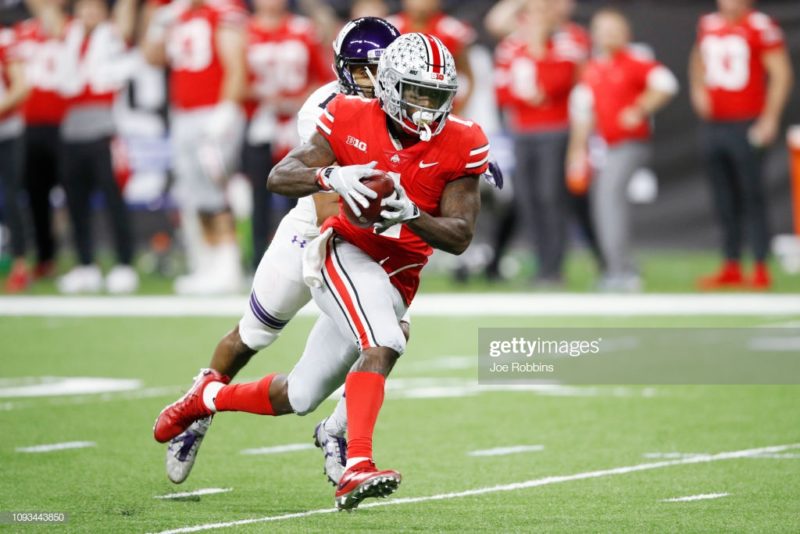 Ohio State wide receiver Johnnie Dixon has battled through a lot during his brief NCAA career. He’s dealt with knee injuries throughout his time at Ohio State; knee injuries that were so severe that Dixon debated on walking away from the game after the 2016 season. The Ohio State receiver chose to return and he was rewarded, enjoying two eventful final seasons while also being named team captain. His best body of work came in 2018 where he recorded 42 receptions for 669 yards and eight touchdowns, serving as a consistent deep threat for the Buckeyes.

This play may help to give a glimpse in what Dixon’s future role at the NFL level may be. He is gifted with great speed, still running a 4.41 40-yard dash, showing no effects of the knee injuries that plagued him. With that speed and acceleration, Ohio State was able to use Dixon as a middle of the field deep threat. The Ohio State receiver really showed a lot of promise as a vertical threat from the slot.

Dixon struggles with press coverage and physical corners and as a result, the slot may be his new home as he will be afforded more of a clean release needed to battle the cornerbacks. On the play above, watch him use his arms to swim past the cornerback and gain separation. From there he flashes his true calling card – his speed and ability to effortlessly get to second gear. Dixon’s 16 receiving touchdowns over the last two seasons were produced on the backs of his long speed.

No Ohio State receiver worked the middle of the field quite like Dixon. Usually tasked with just sitting and finding an open zone, Dixon showed ability to stretch the seams and attack vertically as well. The play above demonstrates that while also showing off Dixon’s reliable and consistent hands. He stretches out and is able to bail out Dwayne Haskins with an impressive grab. Throughout my observations, Dixon did not have one dropped ball.

Dixon has a limited ceiling as his size and strength are going to put a restriction on his usage. He gets swallowed by press coverage too easily and can essentially be taken out of a play by bigger, stronger cornerbacks. His release is not at the level that he can buy separation either, so without the build up needed, Dixon will struggle to beat press coverage. Due to his limitations, Dixon will likely be restricted to being solely a slot receiver.

Despite his elite speed, Dixon really struggles with the rest of his athleticism as he struggles to show off any short area quickness or flexibility to create separation at the top of his routes. He is on the outside on the play above and watch how the Maryland defensive back is able to stay on his hip step by step. His break to the outside is sluggish and not quick enough to get Dixon the space he needs to provide his quarterback with a suitable target area.

There are many elements working against Dixon when it comes to his impending draft status. The biggest concern is that he is only two years off from numerous knee injuries, leaving much concerns over his expiry date should he get dinged up again. Then there is his inability to excel against man to man coverage on the outside, likely restricting Dixon strictly to a slot receiver role. There he may be able to use his true vertical speed and ability to work the seams to eventually be an effective role player. His kickoff return experience should also garner him a roster spot this season.

Games Watched: vs Michigan, vs Indiana, vs Maryland