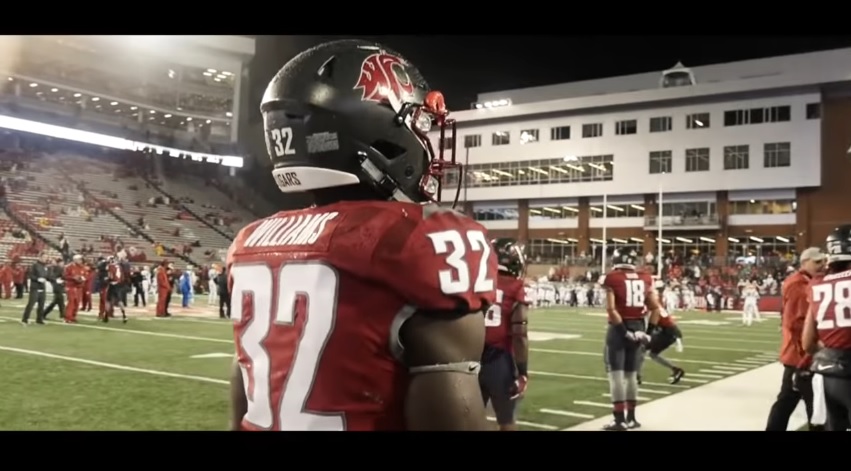 James Williams is a RB that jumps off the screen every time he gets the football. While he was in Mike Leach’s air raid offense, he stuck out as a valuable provider of production in both the passing game and the running game. His game was clearly nuanced and predicated off of high IQ processing and not off of pure native athleticism. Williams developed that technique after he tore his ACL in high school, and has said he has “focused on the subtleties of football”, ever since that very injury.

As much as I hate to use the term ‘Patriots player’, Williams fits that about as well as any RB in this class. Much like Sony Michel last year, Williams’ best trait is simply his hands. He has hands that are better than some receivers in this year’s class. As you can see on this swing pass, his hands are away from his body and it is just gorgeous technique to have the heels of your hands together to catch it in stride there. Another important aspect of the way Williams plays at his size is the significant burst he shows around the edge. This burst might be a big reason why Williams likes to bounce it outside too often, even if he can run between the tackles rather well. It gets him into more trouble when he looks for the big play in inept situations and costs his team time in critical situations.

In addition to that, there are even concerns with his receiving game because of the Air Raid scheme he was thrown into. Williams worked out of shotgun or split back sets and never was flexed out into the slot, although he should be able to do this at the next level. He also has a limited route tree to swings, screens, and angles, but once he is trained in an NFL route tree, he should become far more dynamic.

Perhaps the most impressive depth of Williams’ game is not his burst or receiving ability, but his ability to use footwork, press the line, and adjust angles to his advantage.

On the above play, Mike Leach, as the madman he is, has the WR snap it to the QB and Williams proceeds to become swarmed. However, Williams sees the penetrating ends, takes his feet two steps closer to the line than he theoretically should, baits the ends inside and the LBs down, and bounces it outside because he is such an agile and fluid athlete. From there, it is up to Williams to create for himself, and he does that and more. He puts on display elite contact balance and burst to the end zone. This might have been one of the wackiest plays of the season, and for a guy with such a raw frame, Williams takes contact unbelievably well.

The open field is where Williams lives and breathes. His long speed might not be elite, but it is more than adequate for big plays. He is electric. Williams also has some of the best footwork in this class period. He is a jump cut extraordinaire, as seen in the clip above, and actually shows good vision by cutting back into the open lane. Williams may have finesse to his game, but his demeanor in which he runs is also incredibly aggressive. Down on the goal line, Williams will go full throttle and try to run guys over. That toughness shows up in pass protection too, but he simply needs to bulk up more as his anchor is just not enough.

One of the key translatable traits that scouts want to see in RBs is if they can convert moves in succession, and when you can, that means you are processing the field and have the footwork and agility to makes those successive cuts, spins, or whatever it may be. Williams has that trait, and that means he will be able to create for himself at the next level in a traffic of defenders. He does it in the clip above, and those successive cuts are exactly indicative of what scouts want to see.

Lastly, it is not just the moves in succession, but it is a plethora of moves that makes Williams so dynamic. Whether you want a stutter step, jump cut, juke, or the spin move shown above, Williams has them in his arsenal. His hip mobility combines with that fleet footwork to make him a dangerous open field RB.

Williams is a modern, do-it-all three-down Running Back at the next level due to his natural receiving ability and exhilarating open field prowess. His upside out of a council could be even greater, however, with significant burst and change of pace ability due to his agility and burst. Williams might be that Patriots type of player, but he also has flashes of Tarik Cohen and Darren Sproles in his game. And as Cohen proved with the Bears last year, those types of guys are just as valuable as guys like James Conner who can run you over and catch at the same time. Williams fits into that mold and should be a producer from day one.

Games Watched: vs Oregon, vs Washington, vs Iowa State, vs Wyoming, vs Arizona