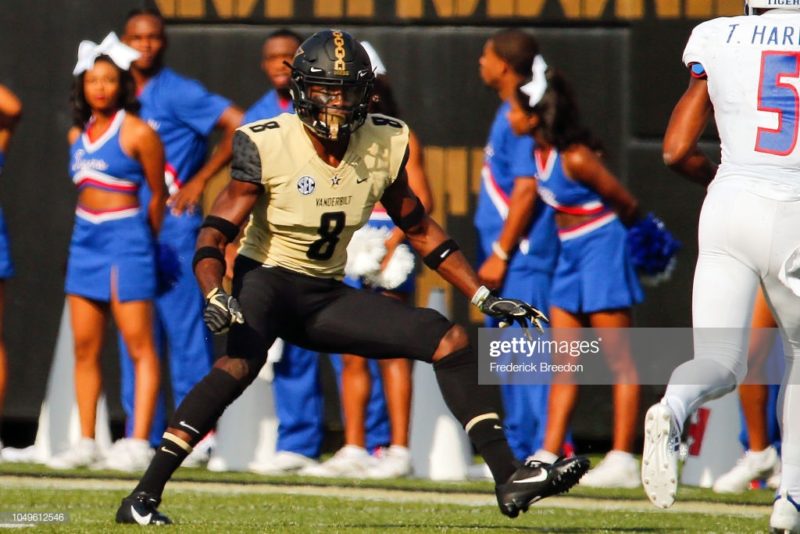 Here is an interesting player, Joejuan Williams (#8). He has very good size and played the boundary corner for Vanderbilt often left 1 on 1. He played a lot of Press coverage, close to the line of scrimmage sometime to jam the receiver and sometimes to bail and run with him.

He’s smooth for a tall corner has quick feet to mirror the WR, has an effortless back pedal and flips his hip quickly to run with receivers.  He seemingly has enough speed to run with most receivers often being in phase and able to run with the deep routes. He looks more comfortable playing receivers to the outside.  Quick footed WR’s can get him to turn his hips in the wrong directions leaving him out of position and capable of giving up easy catches inside. This happened at least three times in the Georgia game. When running with deep routes he keeps his back to the ball and tries to read the receiver without turning his head back to the QB. This need to be cleaned up as it give the WR the advantage on the ball, could lead to pass interference calls not getting his head around and getting grabby trying to read the receiver.

Vs Alabama, lined up on the left side vs Calvin Ridley (#3). He’s in pretty good position but just doesn’t get his head around.  He got a hand in late and may have helped the drop.

At Georgia, he’s lined up on the right side. WR gets him to jump to the inside but he recovers nicely and again shows good COD to stop and use his length to get a hand in and break it up.

At Georgia, lined up on the left and the Riley Ridley (#8) gives him a quick head fake to the outside and gest him completely turned around and you can see how much space the WR gains.

At Arkansas, he’s in off man coverage. He’s in a smooth pedal with probably too much turn in his hips. But he shows good COD and break on the ball to undercut the WR for the INT.

Vs Mississippi, in Zone on the right side reads the short route, sticks his foot in the ground and closes quickly and good effort to get a hand on the ball and rip it out.

Vs Mississippi, he’s on the left side in the red zone. He’s in good position and the WR makes a great catch but with his back to the ball he can’t break this up. If he’s looking it could be and INT.

Vs Mississippi, the receiver gets a step on him to the inside. He gets a little grabby allowing him to catch up and recovers for the INT.

Vs Mississippi, once more in Zone coverage. He’s got the short area in front of him but he reads the QB and shows good acceleration to get back and get the PBU.

Against the run, he’s not as active as I’d like to see.  He attacks pulling OL on the outside taking them on low to try to clog the running lane but on plays to the inside he is tentative and doesn’t look to stick his nose in there. His tackling overall needs improvement going after the ball carrier too high, often around the shoulders, to try and throw them down. And on plays such as screen where he can attack downhill he needs to break down as he approaches and leverage the sideline.

Vs Alabama lined up on the left side and recognizes the reverse quickly. He shows good speed and effort to chase about 40 yards across the field to make the tackle.

At Notre Dame, WR screen to his side and he comes in too hot and too far outside allowing the WR to skip by him to the inside.

Watching Williams I was undecided about what I felt about him. I like his size, speed and comfort playing in Man especially in Press coverage.  Getting beat by quicker WR at the LOS, not helping a lot in the running game and playing with his back to the ball without turning his head makes me not a fan. It comes down to how a team is going to use him and projecting whether the negatives can be improved. I’m pretty sure an NFL DB coach who is much smarter than me can figure out the way to use him right.