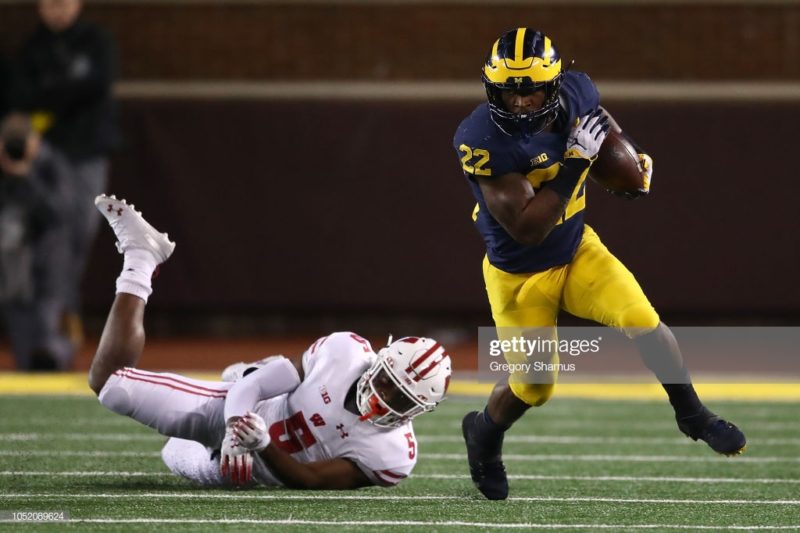 Let’s start with the obvious elephant in the room. Michigan running back Karan Higdon is under sized. Standing at 5’9 and 206 pounds, there are some serious doubts over his durability to withstand an NFL workload. Due to that, his ceiling is likely limited to just being a change of pace back or part of a running back rotation. Now that is not necessarily a bad thing, true workhorse backs are hard to find and majority of teams split the cost and production among a duo or trio of running backs. Higdon still has a variety of assets that make him an intriguing running back at the next level.

Higdon’s speed has long been known to be his biggest strength and it was further confirmed with his 4.41 40-yard dash time at the NFL Combine. Once the Michigan running back hits the sideline, he is as good as gone. Good luck trying to keep up with Higdon in a foot race as he has exceptional acceleration and can hit second gear quickly. He is what we call a home run threat.

While Higdon’s speed is his true calling card, he will not be able to simply run away from talented defenders at the next level unless he puts himself in a position to do so. Fortunately for him and the team that selects him, he seems more than capable at doing that in certain scenarios. The Michigan running back shows a great feel for setting u his blocks and cutting back to find a running lane. Here he is running behind two pulling lead blockers, getting a feel for the flow of the defense before cutting back and successfully gaining five yards. Besides just running to the sideline and turning up field, Higdon is also able to keep defenses honest by making them consider his speed before cutting back inside.

Running behind a lead blocker seems to be the best role for Higdon and he seems like an easy translate to a pro-style offense. Here he is following his fullback, allowing him to set up the block before turning upfield for a big gain. While he breaks two arm tackles on the way, it should be a cautionary tale that contact balance is not one of Higdon’s strengths. He is not a running back who is going to be able to pinball off tackles to create yards after contact consistently, he more fits in as quick footed back who can dart through arm tackles with his speed.

Some of the issues surrounding Higdon’s game have to do with his size and how he handles it. He is a tough, competitive runner and no one is going to take that away from him. What is concerning though is at times he runs as if he is a 240 lb running back, just barreling into whatever is in front of him which leaves valuable yardage on the field. Watch on the play above, Higdon barrels into his linemen ahead of him despite a gigantic hole opening up to his left. Whether that is a critique of his vision, footwork to move laterally or both, it is a concerning aspect of his game that needs to be considered.

A great run right? Higdon scampers to the sideline and is able to gain significant yardage to move the chains. While the product is a beneficial one, the means to that production deserve a closer glance. Watch as Higdon hits the sideline and attempts to cut back inside. His movement laterally is very stiff and clunky, not the natural smooth agility one would see when watching Alvin Kamara or even the bigger Le’Veon Bell. While no one will doubt his speed and quickness, his elusiveness and agility do have a fair share of concerns. Higdon’s feet and hips do not line up in one fluid motion when making cuts in the open field. To add to that, he did not participate in the 3-cone drill at the NFL Combine so his tape is the only definite answer at the moment on his agility.

Higdon may project best as part of a running back rotation where he can be substituted in and use his speed to be a change of pace back. Being a third down back also seems to be out of contention at the moment as Higdon has not shown much as a pass catcher and while he is a willing blocker, his ability to anchor is going to be called into question due to his size. The best position for Higdon to succeed would be on a team that features lots of pulling linemen which will play to Higdon’s strengths.

Games Watched: vs Notre Dame, vs Western Michigan, vs Rutgers,