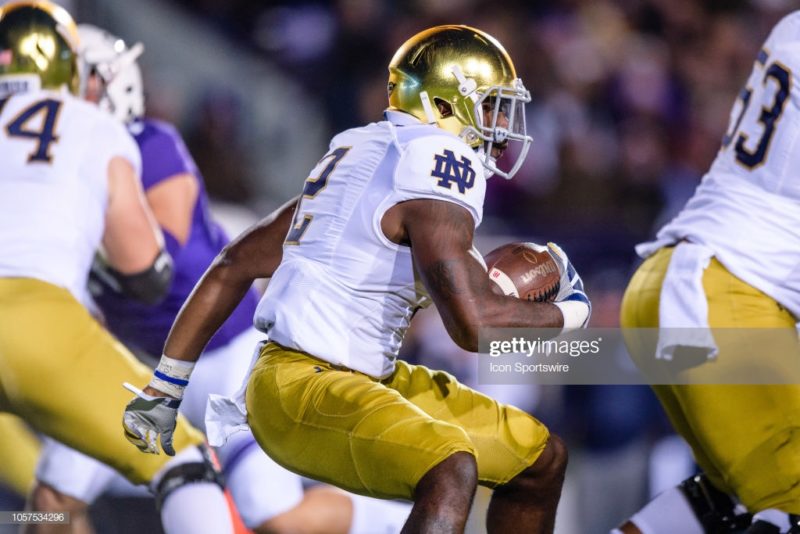 The 2018 season was Dexter Williams’ first as Notre Dame’s lead rusher and he surely delivered on the opportunity. Williams carried the football 158 times for 995 yards and rushed for 12 touchdowns. He averaged over five yards per carry in six of nine games this season while also eclipsing 140 yards rushing on four occasions. With the ability to go the distance at any time, Williams showed Notre Dame and the rest of the world that he is a serious home run threat.

Find a hole and run through it. That is the mantra that Williams lives and runs by. While he is quite a patient back, he does not hesitate when a hole presents himself. Though he is also not the fastest running back available (he ran a 4.58 40-yard dash at the NFL Combine), Williams has a quick burst to the line of scrimmage which gives him a heads up on defenders waiting for him to make a move. A common occurrence you will notice on his tape is that the running back scores majority of his touchdowns while going untouched, a testament to his vision and feel for running lanes.

Williams’ best trait may be his ability to press the line of scrimmage, lure defenders in and then change his trajectory quickly to leave them in the dust. Watch on the play above as he presses the left side of the line of scrimmage before cutting back right and again goes untouched into the endzone. It is impossible not to notice Williams’ awareness and processing skills as he reads a defense from behind the line of scrimmage.

While Williams is more than capable of running between the tackles, he also assures the same success when stretching a defense horizontally. Even though he lacks true top end speed and athleticism, he is capable of also luring in a defense outside the tackles before cutting back inside for another long touchdown. He is among the best in this year’s draft class at using his blockers timely and wisely as he baits the defense in thinking that he is going to run on the outside shoulder of the pulling lineman before cutting back inside.

So how exactly did Williams become a home run threat without the two biggest assets associated with home run runners, that being speed and agility? With great vision and patience. While I hate using the Le’Veon Bell comparison, there is some similarity in their running styles. Williams is more than happy bouncing behind the line for a brief moment, allowing his blocks to develop and then plunging forward. Though it is not shown here, he also runs with a very tough, hard nosed running style that also reminds me of Bell. Stick the Notre Dame running back behind an adequate to elite offensive line at the next level and be prepared to reap the rewards.

Now not every running back who is patient and comes with a good portion of vision can be the next Le’Veon Bell. Far too frequently, these patient backs get caught dancing in the backfield too often or struggle to hit the line when nothing presents itself. Williams also suffers from this problem as he typically only gets what is blocked for him. He is not a running back that is going to create yardage or break tackles to accumulate yards after contact.

Williams has shown that he can get the job done on the first two downs but his third down ability is a bit of a toss up. He is a willing and tough pass protector but there is still some polish needed in his game. While he does a good job at rerouting the blitzer on the play above, he is a tad late to recognize the blitz, pushing forward before catching the tail end of the blitz just in time. Williams also only recorded 16 receptions in 2018 so his usage as a receiver is nothing to write home about either.

Overall, Williams is a ‘what you see is what you get’ running back. He is a patient runner who allows his blocks to develop, often gaining significant yardage in the process. Despite not having any elite athletic traits, his processing and ability to lure in defenders before declaring checkmate is an NFL-translatable asset. Behind the right offensive line, Williams has the potential to do serious damage.

Games Watched: vs Florida State, vs Stanford, vs Northwestern