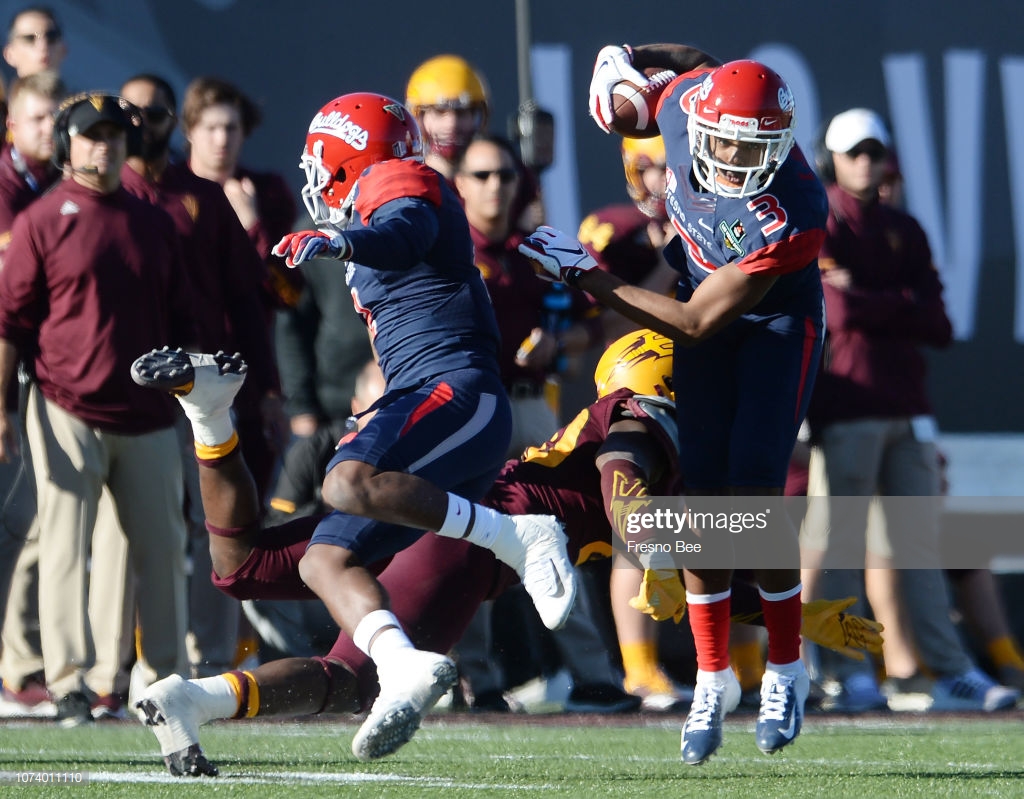 When it comes to mid-round Wide Receivers in the draft, Keesean Johnson sticks out like a sore thumb once you dive into the film. Every technical, small thing you really look for in a receiver is in there in a glaring way. His true native game has very few weaknesses. He is a redshirt senior, and is obviously experience, but this guy’s game is probably the most polished I have seen out of any WR in the draft period. Johnson has had three straight standout seasons at Fresno State now and has only gotten better each year. That should say a lot about his work ethic in general, although his athletic testing was not great as he ran a 4.6 40 and has a completely polished game, which could cap his ceiling.

One of the aspects of Johnson’s game that will always stick out is his ball skills and his ability to use his frame to fully utilize those very ball skills. Johnson knows how to use that size to “box-out” CBs and bully them until he can catch the ball. That physicality is always in his game, as he is a relentless blocker as well, but in contested catch situations it is fully notable.

In the play above, he does a great job of hand fighting his way into the best position possible for this catch. He has the hand leverage and can thus box out the CB. It all started off of his smooth crisp release to the outside though. All he does is give a slight inside head turn to the inside and he has the CB biting inside slightly. That gives Johnson all the leverage to the outside for a back shoulder throw or the ability to cut back inside and box out like he does. Those are such small subtleties in a game of a WR, but they are huge for NFL receivers.

Johnson lives off of moving around on the field. Just like he was at the X on the previous play, he is now over in the slot on this one. Johnson’s versatility and prowess to be moved all over the field is going to be appealing to the Steelers and many other teams for sure. And even more so, he runs crisp routes and a variety of those routes out of those alignments. His transition to the NFL is going to be as easy as anyone’s in this class. And even more, he uses that gorgeous high pointing ability and snags it for the touchdown. In doing so, he really does show boundary prowess by tapping his toes as he goes down. His body control and awareness is incredibly impressive all over his tape.

Quick feet, quick feet, quick feet. Johnson moves his feet a hundred miles by per hour on every play. He has pads over knees to eat up ground too. There really is a lot to like about this play, and it highlights everything about Johnson’s game that I love.

By eating up the cushion given to him, Johnson gets to dictate the way the Corner reacts. A post-corner here is his decision, and his route deception is more than adequate. The ball has to come out on Johnson’s break, and he had this won about as easily as you can win it. It is a gorgeous piece of route running from one of the best route runners in the draft. His ability to use leverage and win it with his route deception will never not be impressive.

One of the weakest parts of Johnson’s game will be his athleticism and as a byproduct of that, his YAC. Johnson does not move with shiftiness in space, although he does move fluidly. There is nothing creative about his attempt to break this here. His vision is fine, but I don’t have much of a confidence in him to win in a one-on-one opportunity because of his subpar contact balance and long speed.

He does however show off easy, smooth hands. He catches this ball easily. Johnson has incredibly strong hands and will rarely drop anything. It has never been a concern for the guy.

The one underrated aspect of Johnson’s game that goes unnoticed is his IQ and ability to see zone coverage. It is Cover 2 and Johnson takes his go route and stems it right into the free zone in the middle of the defense. That is great recognition and some high IQ play.

Keesean Johnson is a polished player in every single aspect of his game. He is not a big play threat that will take the top off of the defense, but he is a classic possession receiver who can move around everywhere and win through fantastic route running. Athletic limitations might just cap his ceiling at a good WR2, but that is fine when you consider Johnson will be a Day 2 pick. Johnson is a guy who can come in Day 1 and make an impact right away in a big way.

Games Watched: vs Minnesota, vs Toledo, vs Nevada, vs Boise State, vs UCLA