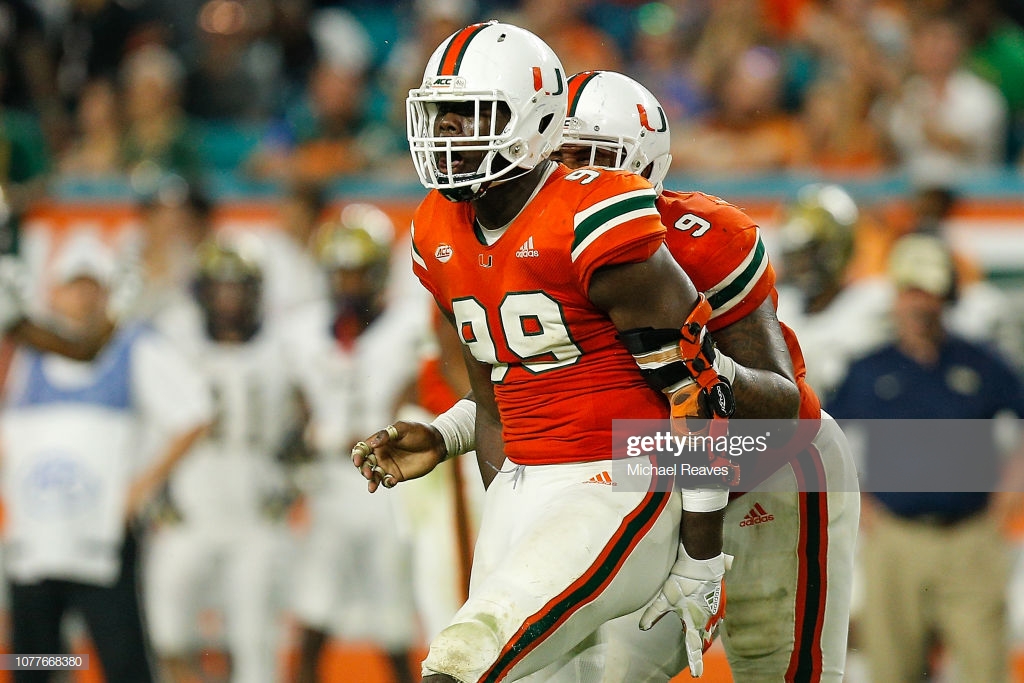 Miami’s Joe Jackson (#99) is a strong man. If he can learn how to use that strength correctly and consistently he’ll be a dangerous defender.

He played on the right side of the Hurricane’s 4 man front lining up from 5 tech to 7 tech and occasionally dropping down to the 3 tech to rush the passer. They ran both 1 gap and 2 gap schemes and occasionally used 3 man fronts as well. His first step is inconsistent but flashed good quickness at the snap especially on passing downs.  Ditto for his hands when he gets them up into the chest of the defender he has the strength to extend and keep the defender off of him. He will also lead with his shoulder into blockers losing leverage and this allows the OL to easily handle him and take him out of the play.

Against the run, he’s solid overall. He will show good recognition and COD to identify the ball carrier and make plays. He has the quickness to swim around blockers and the strength to play in a 2 gap scheme but struggles to disengage consistently. He’s aggressive when taking on pulling blockers attacking them in the backfield instead of waiting for them to initiate contact. He shows a good motor to chase down the ball across and down the field. One on one he doesn’t move defenders at much as you’d like as he gets too upright when taking on blockers and not using good leverage.

Vs Clemson, lined up on the right at the 6 tech he swims over the TE and gets down the LOS to make the tackle on the RB.

Vs North Carolina he shows what good hands and leverage can produce. He doesn’t make the play by drives the tackle 4 yards into the backfield.

Vs Florida State the middle screen forms in front of him and he chases 20 yards downfield to make the tackle.

Vs Pittsburgh he shows good awareness on the Jet sweep to cut off the outside and good COD to take down the runner.

Rushing the passer his favorite move is the rip around the outside. Again the strength is evident here and he has solid bend around the edge. He’s had success also with swim, bull and hump move. He need to work on his hand usage and placement to improve his pass rush efficiency. Too often he doesn’t counter when an OL get hands on his chest plate. Putting multiple moves together would make it more difficult for the blocker.

Vs North Carolina he reads the screen gets into the passing lane and gets his lone career interception and returns it 42 yards for a TD.

Vs Florida State this is his favorite the rip around the outside and he shows the solid bend I mentioned around the edge.

At Virginia Tech this is a bit of a rip and dip. Coming around the edge he uses his left arm to lift the arm of the LT and dips his shoulder and flattens out to get the quick sack.

At Virginia Tech he varies it this time and shows good quickness with a swim to the inside.

And one more at Virginia Tech this time he loops inside into the A gap on a stunt and shows good acceleration up field.

Vs Pittsburgh he shifts pre snap into the 3 tech splits the LG and LT and tracks down the QB as he tries to scramble away from middle pressure.

Approximately 10-12 times in the games watched I saw him drop into zone coverage. He area wasn’t targeted so it’s hard to judge him in this area.

The common phrase in my notes was he’s so much better when he uses his hands.  If a coach can get that drilled into his head and get him to use them consistently I think he can be a solid run defender and good pass rusher. I think he has skills that needs to be honed technically and if he does that he can help any team as a pass rusher but would fit best in a mainly 2 gap scheme.  In order to switch to the OLB and play in Pittsburgh he’ll probably have to show some ability in coverage so we’ll have to keep an eye on that from the combine to his pro day.