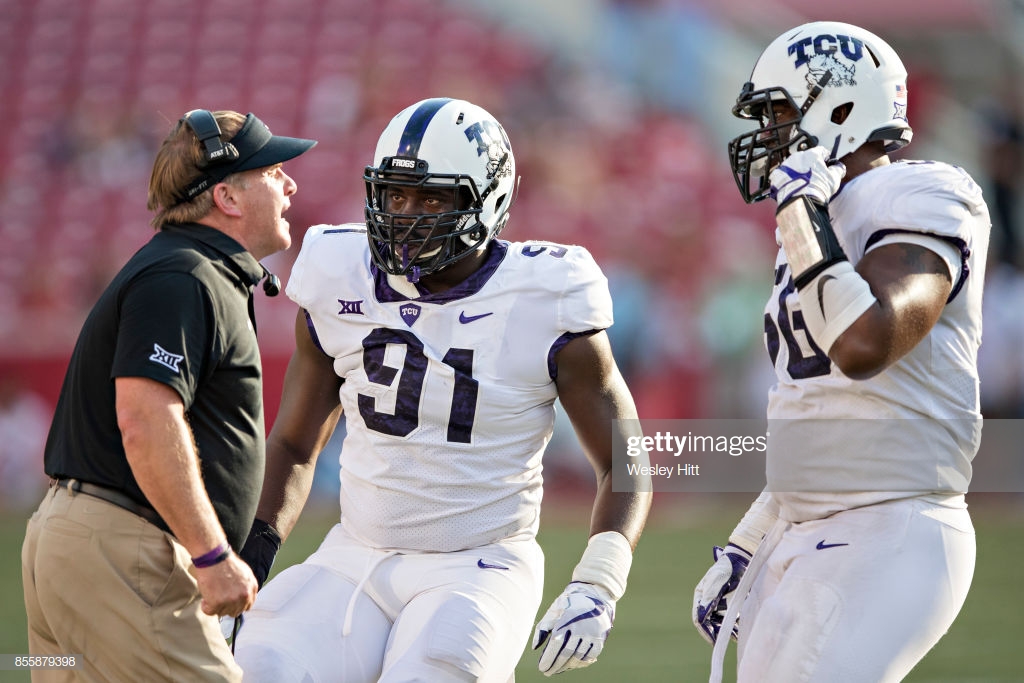 -Great at converting speed to power as a pass rusher, especially in tight window with offensive linemen; will stun them with quick conversion, leading to many pancakes
-Loves to use forklift technique when rushing passer and puts linemen on skates with leverage
-Heavy hands at point of attack that visibly stun linemen on tape
-Plays with great energy and wants to make every tackle
-Lengthy player that has reach to make number of tackles he has no business getting to
-Solid lower half strength to sit and anchor against the run, tying up gaps

-Very limited in space and looks stiff on film with lack of COD skills
-Purely a power rusher and doesn’t seem to have much in his tool box
-Gets stalled out rushing the passer when power doesn’t work and can get buried in the process
-Rarely shows the ability to turn the corner and doesn’t have much flexibility
-Slow reaction time to the snap and is often the last one off the ball for TCU
-Seems to come off the field quite a bit, leaving questions about conditioning

-Set a career high in sacks and tackles for loss in 2018 with 6.0 sacks and 11.5 tackles for loss
-Pro Football Focus graded Collier the Big 12’s best edge rusher in 2018
-Played in 42 career games with Horned Frogs, recording 82 total tackles, 20.5 tackles for loss, and 14.5 sacks, adding one career interception and six passes defensed
-Earned invite to Reese’s Senior Bowl in Mobile, Al.
-Ran a 4.91 40-yard dash at the NFL Scouting Combine, and clocked a 7.71 3-cone time

Leading up to the NFL Scouting Combine, one EDGE defender I was really excited to watch on tape was Texas Christian’s LJ Collier, whom I stumbled across on Twitter thanks to NFL Network’s Daniel Jeremiah talking up the Horned Frogs pass rusher.

After a poor day of testing at the Combine that saw his stock take a bit of a hit (especially that rough 3-cone that tells you about change of direction and flexibility), I decided to throw on Collier’s tape from the 2018 season – which just so happened to be his first season as a starter.

I can’t lie — Collier’s tape has some major flashes, especially in the power department.

Here against California in the Cheez-It Bowl (remember, that was the game with like 10 interceptions combined and was an absolute disaster), Collier puts the Cal tackle on skates with a head fake outside, catching the tackle leaning before running right through his chest for the sack.

I like the long-arm Collier busts out late in the rush, creating separation with the tackle, allowing him to shed the blocker quickly and finish off the sack.

Power rushes are a massive part of Collier’s game as a pass rusher. In fact, it’s pretty much the only success he has when rushing the passer.

That poor Texas Tech tackle sure is glad to not have to see Collier any longer.

Both times Collier sets the Red Raiders’ tackle up with a quick burst up the field, getting the tackle to overset, allowing Collier to create the short, explosive burst into his pads, lifting him up and running him back into the quarterback’s lap for the sack.

Now, this always doesn’t work, which forces Collier to try and use the dip-and-rip, or the push-pull move. When tackles set for his power rushes, they’re able to take away his limited counters.

Facing West Virginia’s Yodny Cajuste in 2018, Collier had a rough game, getting stuffed repeatedly coming off the right side of the defense.

Watch Cajuste get the quick set and brace for the power before easily adjusting to Collier’s dip move, shutting down the TCU rusher with ease.

Another area Collier struggles with rushing the passer is when he tries to go power and gets stalled out by a lineman, or in this case, a tight end. Once he stalls out, he’s dead in the water and usually gets tossed to the side.

Watch West Virginia tight end Trevon Wesco – whom I’ll have a report on late in the month – bury Collier here after holding up against his initial power rush.

That’s not a good play to put on film for Collier, especially when rushing against a tight end, regardless of the little help the WVU running back gave.

As a run defender, Collier is fine. He was asked to do quite a bit of things as a run defender for TCU, whether that was shooting gaps, 2-gapping, or setting the outside edge. He has good strength to anchor, but he needs to do a better job of keeping the lineman out of his center mass by using his long 34-inch arms to latch and lock the lineman away from his chest.

He uses his long reach well to corral ball carriers that he has no business really reaching, making some impressive run stops. But overall, he just has too many question marks with his game in a pass-first league to really warrant an EDGE role.

I’d personally slide him inside in a 4-3 system, especially in Nickel and let him work against slower interior linemen where he can try and use his power to push the center of the pocket.

I do think with his tape and his overall profile he’ll be a third-round selection for a 4-3 needy team, but he’s nowhere near a fit for a 3-4 system as an OLB or a 3-gap DE.