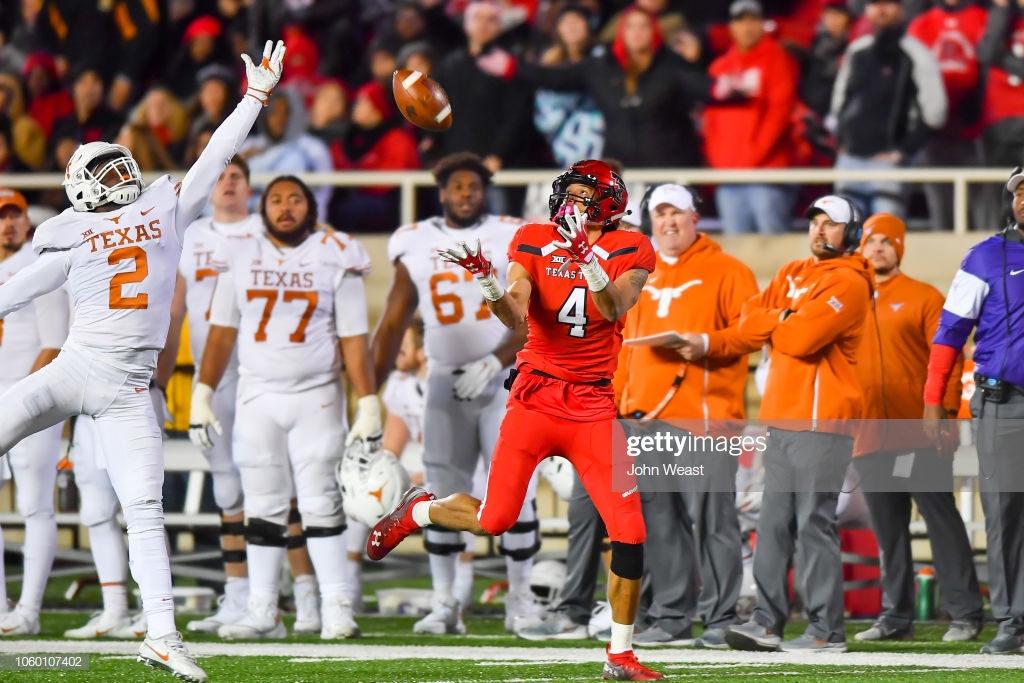 Antoine Wesley, coming into the 2018 season, had very little playing time at all, but once he began to play, it was clear that he was a dynamic weapon that could not just work in Kliff Kingsbury’s system, but work in any system as a receiver with plus size and the ability to run routes very, very well. Wesley’s tape is so impressive not because he has that size, but because of what he does with that size. His fluidity in particular is a hallmark of what he can do with his size, but he also uses his size more than well enough to win fades on the goal line and block with an absolute tenacious attitude.

He is a guy who you fall in love with not just because of the football you see, but because of the leadership and attitude that is so infectious on the field. Wesley’s actual on the field production, however, was impressive as well. There is no 6’5” receiver that is not a good contested catch receiver, but few of them are as good in space as he is.

Case point number one is right here. The route is a simple seven out, but his ability to win after the catch is dang impressive. It is rare that a receiver at his size can bend like that and then stay in bounds. Body control and hip flexibility are elite as is his ankle flexibility. If you look at the angle he is at he stays in bounds on the sideline, it is insane that a guy at his size can still tightrope the sidelines and still hit the accelerator right after staying in. It required all of his athleticism and the burst right after only shows his vision as he saw the swarm of defenders out of his peripherals and hit his burst. That is high IQ stuff in the open field.

Route running extraordinaire. Antoine Wesley should not be allowed to do this at 6’5”. It is a sluggo in the red zone and he takes Isaiah Johnson to school. The most impressive thing is that he set this up prior in the play before as he went directly outside and then back in. So, again, his IQ is off the charts. But his ability to run this with excellent hip sink as he changes direction and to completely get Johnson to flip his hips spells well for his ability to create separation downfield as well as in the red zone. His feet move a mile a minute and it shows that he is polished in this area.

A concern with guys this size are really two things. First, do they play physically with their size? Second, are they lazy when going to get the ball due to their size? Wesley is neither of those things.

Wesley attacks the ball with ferocity due to his physical nature and goes up to high point ball that this even when he does not have the leverage. He makes plays that should not be made happen due to that combination of weapons. His contested catch ability is thus incredible. You might see him as just finesse when you first watch him, but once those jump balls go up, Wesley thrives at a completely elevated level. And that was is why he is so attractive to me.

At the bottom left of the screen here, Wesley shows off his lateral mobility and completely destroys press coverage due to fantastic hand fighting and thus gains leverage and separation as he works across the field with his quarterback on this deep crosser. It is a beautiful job of working with his QB while still giving himself more than enough of a path to win this battle one-on-one. The corner never has a chance because Wesley just uses his size to box him out right off the release. He essentially stacked him diagonally.

The body control just shows up on tape so often. It is incredible just how good this guy is at controlling his entire frame. This is a gorgeous toe-tapping job and he catches this away from his body too. It is those natural, strong hands that will take him far after his athleticism is even gone. He is a technician at heart and an athlete second.

Antoine Wesley is a prototypical X-receiver with size and ability to win vertically just about as good as anyone in this class. His ability to understand coverages and use his frame well combine with his shockingly fluid athleticism to truly make him a threat at all levels of the field. He should transition easily to the NFL and be a contributor from Day 1.