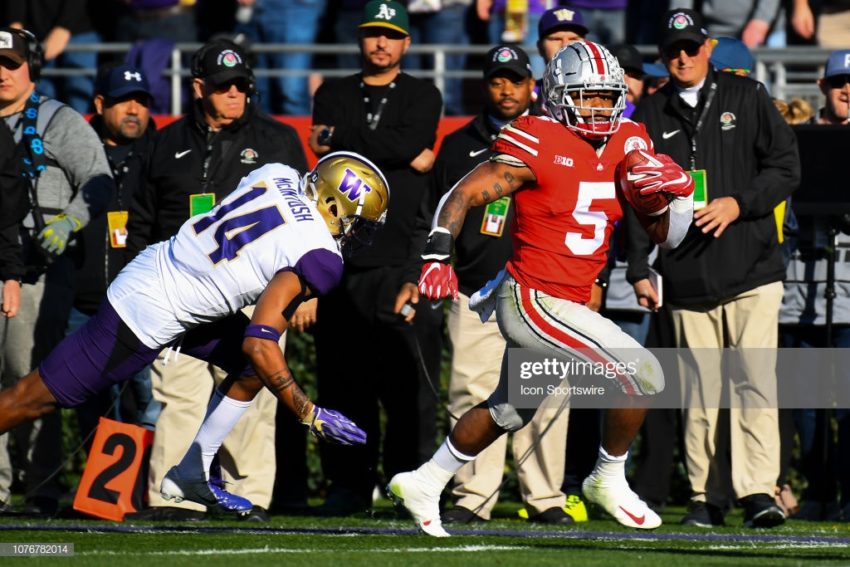 Mike Weber is someone who flashed a ton of potential during his freshman season as he rushed for over 1000 yards. He has since failed to build off his freshman career, never cracking over 1000 yards rushing again, though he came close in 2018. His junior year, Weber ran for 954 yards, earning a 2018 All-Big-Ten honorable mention in the process. Weber felt confident enough in his abilities that he decided to forgo his senior year and enter the 2019 NFL Draft. While he does not have a stand out trait, he has a lot of workable tools.

Weber runs with springy footwork as he navigates his way through junk. The way he so effortlessly is able to see running lanes like on the play above is a sequence that can be re-watched endlessly. His biggest asset is his vision as he is a great processor when blocking lanes open up. Especially take note how he changes his running trajectory without losing any speed.

The Ohio State is very comfortable running in zone blocking schemes where he can use his vision and processing to find open lanes for himself. Watch on the play above as he cuts back away from the play direction, gaining a chunk of yardage.

While Weber certainly has the mental characteristics to make some sort of impact at the next level, his physical traits are a bit harder to notice. What is certainly evident is that he is one tough runner,  and does not shy away from contact. Weber runs with a lot of steam and comes equipped with an adequate amount of contact balance.

For a 5’11, 210 lb running back, Weber sure does consistently run with a full head of steam. With his 4.47 speed and ability to just be a downhill runner, Weber is harder to tackle than it appears, especially once he gets in the open field. His success with running through tackles in the open field can be contributed to Weber always keeping his feet turning.

One critique of Weber that is common with a lot of the lower level running back prospects is that he typically only goes as far as his blocking goes. If he is provided 10 yards, he will gain 10 yards. If he is provided one yard of space, he is only going to end up with a gain of one. Weber is not the type of back who will be able to consistently make things happen. If his first read is wrong or there is nowhere to go, he is a sitting duck for the defense.

When it comes to his third down abilities, Weber has some promise as he has recorded 54 receptions and is a more than capable check down option. Other concerns will focus on his durability as he has had injuries plague him throughout his career. In 2017, it was a hamstring injury that affected him throughout the season and in his junior year it was a foot sprain. While he did not miss anytime last season with a foot sprain injury, Weber did play at less than 100-percent at times.

Weber is going to get a shot to fill in the backend of a running back depth chart on a zone blocking team. While he does not have much of a ceiling, he could develop into a serviceable backup one day as his vision and toughness are above average traits.

Games Watched: vs Michigan State, vs Washington, vs Oregon State