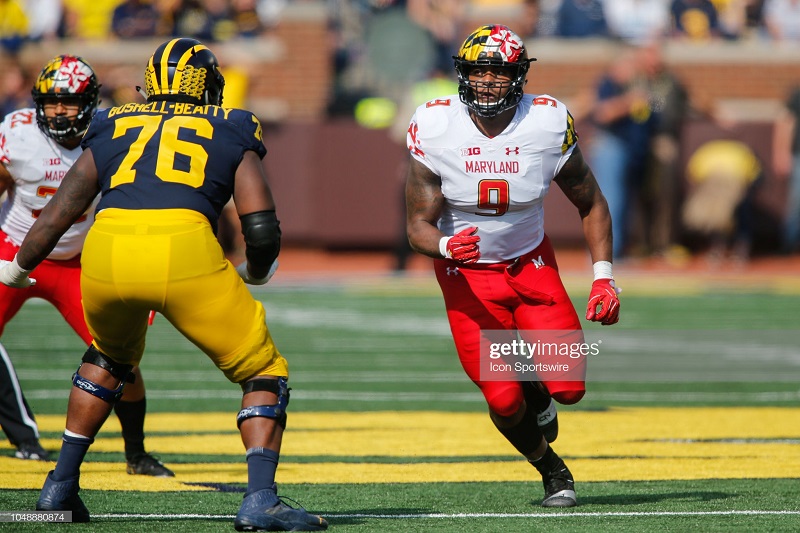 Byron Cowart had it all. He was the nation’s top ranked recruit coming out of high school and looked to make a Jadeveon Clowney-like impact at Auburn. Unfortunately for Cowart, it never materialized that way. Just 12 tackles and one forced fumble was all the talented defensive end was able to muster through his first two seasons. It seemed that Cowart’s story was going from hero to zero until he decided to leave Auburn and had a career rebirth at Maryland. In his first and only season at Maryland, Cowart showed flashes of the talented defensive end he was built up to be, recording 38 tackles, three sacks and two interceptions. His play earned him an invite to the Senior Bowl, where Cowart was able show off his talents.

All it takes is two plays to recognize why Cowart was the most dominant player in high school football during his recruitment. His raw power and long arms (33 ¾”) give him the ability to just absolutely dominant opposing tackles. The power that Cowart possesses is something that can not be replicated in the gym and it is a dangerous weapon in his arsenal. Watch the Maryland defensive end knock two offensive linemen to the ground with one arm. While his production could be doubted, Cowart’s elite physical tools cannot be called into question.

Cowart knows exactly how to use his long reach to advantage. His ability to consistently get under the pads of opposing offensive lineman is a major reason why he had a revitalization in his final year. The Maryland defensive linemen uses his 33 ¾” reach to gain leverage and hold his ground against linemen before pulling off the blockers to make a play. This happens clearly on both plays above with Cowart making big stops against the run. It is plays like the one above and his size (6’3, 298 lbs) that also make Cowart a candidate to play as an 3-4 defensive end as he shows he can still use his tools to control the run game.

The defensive end did not get to the quarterback often during his collegiate career but when he did, they were a sight to see. Cowart’s bread and butter move is using his strong upper body to swipe or swim his way inside, causing havoc in the pocket. With a quick step off the line and a great swim move, Cowart makes his way across the guard’s face before swallowing the quarterback whole.

There is no quit in Cowart’s game, the defensive end will fight determinedly to get to the quarterback. Watch on the play above as his first move is neutralized but he battles back, going across the face of the tackle and records a strip sack. There are going to be times when your first move is neutralized but the best pass rushers have a way to battle back and Cowart showed that this season, though in a small sample size.

This play will show up in the box score as just an ordinary tackle but it is the means to that tackle that will really catch a coach’s eye. Cowart is not one to take plays off. With a high motor, Cowart hustles to the football and is able to make a tackle down the field. While plays like the one above are not the flashiest plays that make highlight tapes, they could be the difference makers between being selected in rounds 4-7 or going undrafted.

Cowart does come with his handful of flaws. His production is modest at best and far from what you would expect from a number one recruit. He moves how you would expect an almost 300-lb lineman to move, which puts his long-term ability as a five technique in serious doubt. He is a one-dimensional pass rusher who relies solely on his reach and swim move. His instincts are average which leaves him unable to make plays in the open field like the play above.

A great redemption story, Cowart is going to find a role at the next level. Though how he will be used can be openly interpreted. He could slot in as a reserve 4-3 exterior defensive end, though his ceiling may be extremely limited there. I would not rule out a long term fit as a 3-4 defensive end thanks to his frame and upper body strength. While he may never be a superstar pass rusher as a 4-3 end, Cowart’s ability to hold his own in the trenches and occasional pass rush potential could make him a better fit for a 3-4 defensive end.