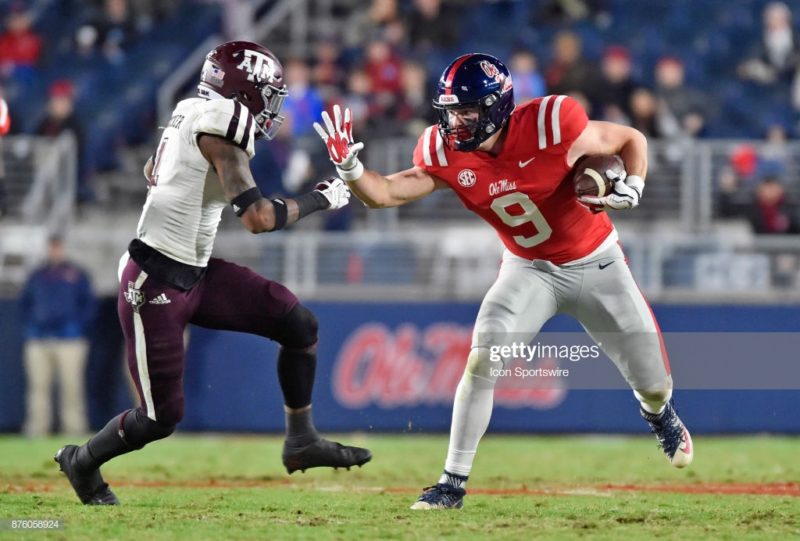 Ole Miss had one of the best wide receiver groups in the country so their tight end Dawson Knox (#9) may have been overshadowed but he’s an interesting player in his own right. Despite a small amount of receptions in college he showed some positive traits that teams will really like.

He played mostly as the H or move TE lining up primarily on the wing or split in the slot but sprinkled in a few snaps in the backfield and inline in short yardage situations.

As a receiver he worked primarily in the short (flat, curl, whip routes) and intermediate areas (dig, out, drive routes) and has the athleticism to be used up the seam and on wheel/out and up routes.  He has good acceleration off the LOS getting up to speed quickly and likes to gain separation using his body at the top of the stem or acceleration out of the break. He does round off his routes particularly to the inside and needs to work on consistently dropping his hips. His hands are very good and can adjust to the ball all around his frame to make the tough catch. He displays good quickness and acceleration after the catch to gain the extra yards with a good career average of 15.5 yards per reception.

At LSU here is a dig route from the left slot where he shows off his hands reaching low and in front to make a tough grab.

At LSU from the left wing he runs an intermediate cross shows good concentration with the defender in front of him, runs well after the catch for a 40yd gain

At Kentucky the run fake draws the LB’s up and Knox circles behind them. Good hands to adjust behind him and gets up field quickly.

At Kentucky from the right slot he sells like he’s blocking on a screen and gets behind the defender and an even better adjust behind him to make the catch.

Vs Arkansas in the tight slot uses a whip route; good adjust with hands away from his body and acceleration up field using his blocks to maximize the gain.

As a blocker he is willing and is improving.  He’s probably best as a lead blocker as Ole Miss ran a lot of counter plays pulling him with a lineman and he plays with good leverage to square up his block in the gap or on the second level and plays with a touch of nasty to finish off the blocks. Moving laterally he’s not as quick as you’d like and can get caught up working through the trash inside and has struggled on the backside in Zone blocks. In Space on screens he is improving and is hit or miss right now. When he breaks down early he has more success. In base blocks he does a solid job with his hands and base to turn and wall off defenders but can get out over his toes losing balance. In Pass Pro, he works from the inside out and needs to improve sliding with defenders and his play strength to anchor on power rushes.

At LSU he’s leading through the hole and squares up and gets a good punch into the chest of Devin White (#40) to knock him back a couple yards.

Vs Arkansas here is a solid Pass Pro rep with good balance, hand placement and mirroring to keep the rusher at bay

Vs Arkansas on the left wing a base run block and he uses good leverage and hands placement and finishes the block.

Vs South Carolina in the red zone he’s a wing on the right and see how low he gets to get the leverage and wall off the defender.

Vs South Carolina here is a good example of him blocking his space. Breaks down early, stays square to his defender and keeps his body between him and runner.

For the TE position a lack of production in college isn’t an issue. There are a lot of programs that don’t use the TE a lot in their offense. What you need to look for are the traits to see if he can succeed. Knox has the athleticism of a modern day TE, shows good hands and ability to adjust around his frame and can gain yards after the catch. His blocking has its ups and downs but from the games watched you can see he has worked to improve that area from 2017 to 2018. Playmakers are what the offenses look for and Knox has shown that ability. He’d fit in as TE2 to be used in 12 personnel who can be used in the backfield, slot and wing.