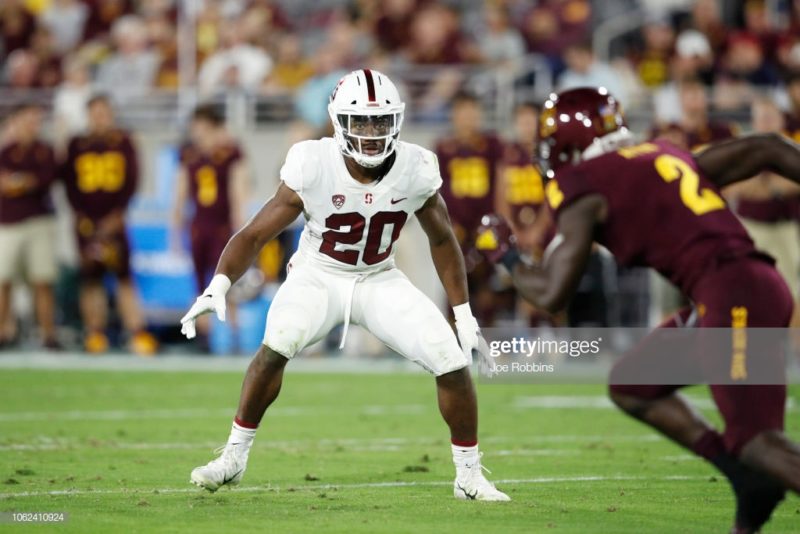 Bobby Okereke (#20) tested fairly well at the Combine running a 4.58 40 and measuring the longest arms at 34.5 inches. He played at Stanford which runs a 3-4 defense and utilizes Zone and Man coverages.

Against the run, he processes well particularly against Gap/Power run keying off of pulling lineman and on outsize Zone runs. He’s willing to fill the gap and take on blocker to stuff the hole and has the athleticism to beat blockers to the point on outside runs. On inside Zone runs he hesitates to attack downhill allowing the OL to get out to him on the second level and he has difficulty disengaging off of blocks. He uses his length well to keep the defender at a distance but doesn’t show the play strength or effort to get off it. He’s a solid tackler who’ll wrap up to get his defender down but doesn’t try to punish runners, to play through them.

Vs Washington he shows good reaction reading the pullers and beating them to the hole. He loses his footing but is able to reach back to force the fumble.

At Oregon in the red zone the defense brings both safeties and Okereke on a run blitz. He gets a shoulder inside the backside B gap and pushes through for the TFL.

Vs Utah it’s a run to the outside were he scrape and accelerates, wraps and tackles.

Vs Washington State here is a run to the inside that he waits on. He is 8 yards away when the RB is gap committed and he only closes 2 of those 8 yards. You’d like to see him attack more here.

Vs Pittsburgh here he is the LILB against an outside Zone run. Good reaction and he attacks the B gap is able to hold off the RG to the inside and make the tackle.

In Zone coverage he’s flatfooted initially at the snap and it take him a second to get moving but shows good awareness to keep his head on a swivel, identify route combinations to expect routes coming into his area and can cover a good area. I feel like he should get more depth but I can’t be sure what he asked to do by the defense and his COD is a little labored.  In Man coverage, he can cover TE/RB in the short area and has the ability to carry TE’s up the seam. Didn’t see him a lot on intermediate coverage and he’ll need to work on being in phase, closer to the receiver, to take away passing lanes.

Vs Washington he’s lined up over the TE in the tight slot and reacts to the QB role out and shows good acceleration to close and get the sack.

At Oregon, he slides with the H back after the snap but the two receivers to that size are covered so he give chase and runs down the QB.

At Oregon, in Zone coverage he has two receivers in his area so he splits the distance and then closes once the ball is delivered.

Vs Pittsburgh coming on a blitz he gets a one on one rep with RB Darrin Hall (#22) and he wins this battle to get the sack.

Vs Pittsburgh he’s in Man coverage on the RB running up the seam. He’s a little late to react but he recovers to get a hand in and break it up.

Okereke is an interesting prospect.  I like his athleticism and the way he processes most runs. He didn’t blitz often but the ones I saw were pretty effective. Coverage needs some work both in Zone and Man but I think he can improve there. What I don’t see is that fire or urgency you want to see.  Someone who always attacks the ball instead of letting the play come to him and drive through ball carriers. It could be in him because you see it in the critical situations but can he play that way all the time?

He could fit as a Mack linebacker to scrape and pursue and use his athleticism in a 3 man front but may fit best as a Will in a 4 man front and will need to help on special teams initially. If he can add strength and clean up his coverage ability he could be a surprise player in the next couple of years.