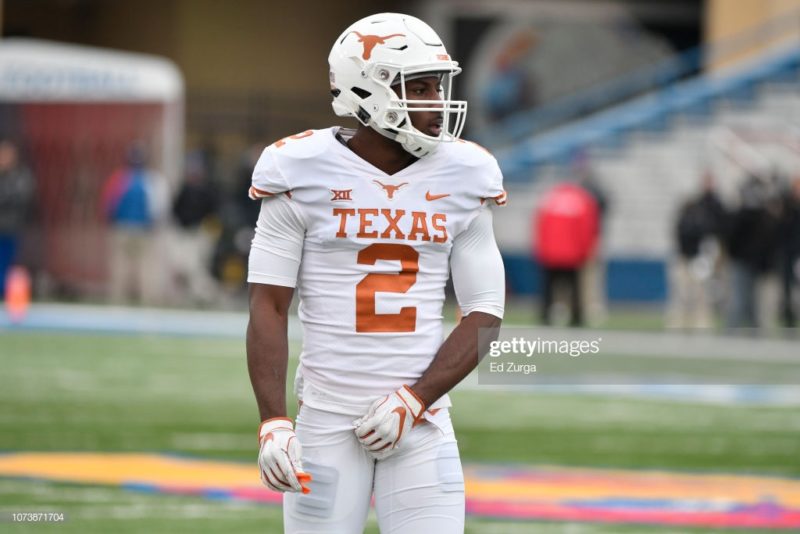 Kris Boyd (#2) has good size and timed speed (4.5 Combine) with a lot of experience as a starter in the offense dominated Big 12 conference which has a ton of receivers in the 2019 draft.

He has played on both the left and right side and was used primarily in off Man, Press bail and Zone coverage and occasionally asked to jam in Press at the LOS. At the LOS he did a nice job to jam the receiver and force him to the outside and has the speed to run with most.  When playing off the LOS is when the tightness in his hips shows up.  He can get manipulated by quicker players that will get him to move laterally or get him on his heels hence he becomes off balance hurting his COD. In Off Man, he stays in his pedal to long allowing receivers to eat up the space and get the advantage on him leaving him to chase them down the field and he gets very grabby when he’s beat and isn’t subtle about it. He struggles to get his head around to combat the ball in the air but does a nice job to play the receiver through the entire play and get his hand in late to knock the ball loose. In Zone he shows good awareness of routes, passes them off well and reacts well to plays in front of him.

Vs Texas Tech in Zone he makes an effort to re-route the WR and then reads the QB to get back and break up the pass.

Vs West Virginia he’s outside to the left on David Sills (#13). This isn’t pretty and probably should have been DPI but he battles to get a hand in to ensure no catch

Vs West Virginia against Sills who gets inside of Boyd on the go route and has a chance to make the catch but a savvy move at the end to pull the right arm out to prevent the completion.

Vs Iowa State tight at the LOS vs Hakeem Butler (#18). He’s in pretty good position running in phase with Butler. At one point he reaches in and grabs Butler’s pads under his chin and although he gets a hand in he can’t elevate to win the rep.

Vs Oklahoma at the LOS vs Marquise Brown (#5). Brown accelerates, then throttles down about 5 yards out, jams to the outside and gets Boyd facing the wrong way creating lots of space. Eventually Boyd makes the tackle by the facemask.

Vs Oklahoma in off coverage the route looks like it’s going to be a post corner. The WR get Boyd to commit to the inside move and when he cuts back outside Boyd sticks out his arm to corral him and draw the flag.

Vs Oklahoma on a fade route to the corner. Good route and throw that has Boyd beat but he slaps a hand in late to knock it away.

He’s very good in run support willing to play physically and get in the pile much more than most DB’s.  He is a good tackler able to get his man down but needs to improve his angles on the outside.  He’ll attack tight to the scrum leaving the outside open forcing him to drag runners down by their arms or jerseys .

Vs Texas Tech he’s in Zone coverage when a receiver comes across the field with the ball and makes a nice physical tackle.

Vs Texas Tech he comes up to help on an outside run. Ideally you’d like his angle to be a little wider but he’s able to chase down the runner and make the tackle.

Vs Georgia he coming on a corner blitz when the runner comes his way. He breaks down and the RB tries to get to the outside but he’s able to drag him down by the arm.

Boyd has the size, speed and physicality you’d like to have but he has limitations to his game that make him more scheme specific than other DB’s.  He’s more suited for a Zone heavy system to let him react to the patterns and attack in front of him and he can be used in press Man to challenge at the LOS. The tightness in his hips, COD skills and grabby tendencies don’t make him ideal for a Man coverage scheme. I wouldn’t be surprised to see him make a move to safety at some point. Should be able to help on special teams right away and compete for the #3/4 DB spot.