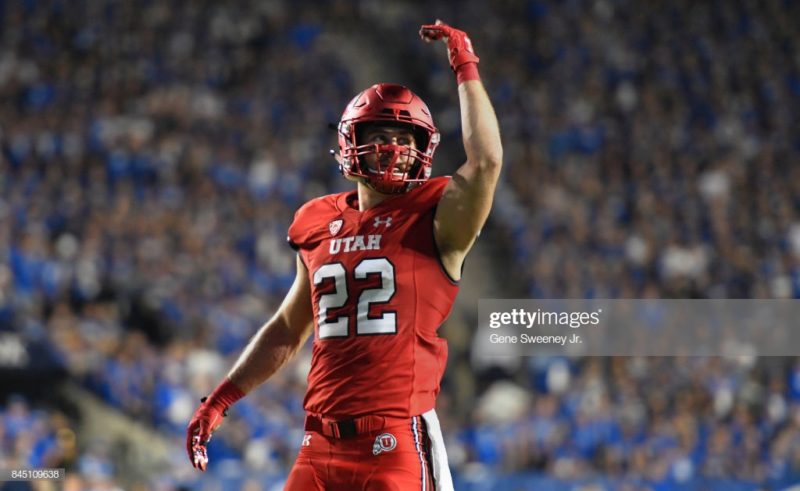 The fascination over linebackers who can be true three down linebackers has reached new limits in today’s NFL. It is why the masses can hardly contain their excitement when a prospect is labelled as a safety to linebacker convert. A linebacker with defensive back coverage skills is every defensive coordinator’s dream. Utah’s Chase Hansen is the latest player to transition from safety to linebacker, he did so for his senior and the results on paper were encouraging. Hansen posted 114 tackles, 22 tackles for a loss and two interceptions during his final year. It was a season that highlighted a ton of optimism but also showed some much-needed realities about the difficulty of transitioning from safety to linebacker.

Here is Hansen showing off his coverage abilities, undercutting a slant route and taking it to the house. When you hear ‘safety to linebacker convert’, this is what is imagined. Hansen does have great instincts in coverage, he moves and occupies space well. He also has a few reps where he carries a slot target up the seam. When it comes to his ability to sit in a zone or even play man in a pinch, Hansen does everything asked and more from the linebacker position.

As a former safety, Hansen comes loaded with athletic ability as his closing speed, range and short area quickness are all adequate-good traits. When given space to operate, the linebacker is like a tiger pouncing on his prey. Hansen recognizes the run to the outside and quickly closes in and makes the tackle. Hansen’s pursuit speed and range are just a few of the athletic traits that he possesses.

A player does not rack up 22 tackles for a loss by accident. Hansen recorded an insane amount of tackles behind the line of scrimmage due to his ability to come downhill quickly and also because of his ability to diagnose when given the means to. Hansen made a living blowing up screen passes during his final season. He recognized them quickly and was not afraid to get his hands dirty, playing very physical sifting through junk to get to the ballcarrier.

Often times we fall in love with hybrid players due to the athletic traits they may possess. Where we fall short is failing to realize the downfall of these hybrids which is often their mental ability to switch positions. While a safety is often the last line of defense or an additional reinforcement against the run, a linebacker is defending on the front line. Hansen shows his own shortcomings as a linebacker, struggling to play under control and being lured in by misdirection or counters. On the play above he keys in on the fullback and is completely pulled out of position, leading to a big gain.

There are also other times where it seems that Hansen does not fully trust his instincts as a linebacker yet. Watch on the play above, it seems that the Utah linebacker is hesitant to attack the ballcarrier. He instead remains stone footed and the play goes for a significant gain as a result.

Hansen has made the right lead and he is pursuing it full speed on the play above. This is it, this should be a big tackle that highlights the instincts and athleticism of these safety turned linebacker types. The key word is should. Hansen whiffs completely on the tackle, which is a common occurrence on his tape as he struggles to wrap up consistently. At 6’3, 220 lbs, Hansen finds himself in an awkward position as he seems just too lanky at times to provide the necessary size for his new position.

While a safety transitioning into a linebacker offers promise of a front-line defender with center field athleticism, often times this is not the case. What we see with a lot of hybrid players, especially early in their development, is a player with the tools but limited processing skills for their new position. Hansen falls into this category as he has all the athletic tools but he struggles instinctively as a front-line defender. Combine this with the fact that he will already be 26-years old by the time the 2019 season kicks off and you are left with a limited role player with not a lot of upside.

Games Watched: vs Washington, vs Northern Illinois, vs Colorado (2017)