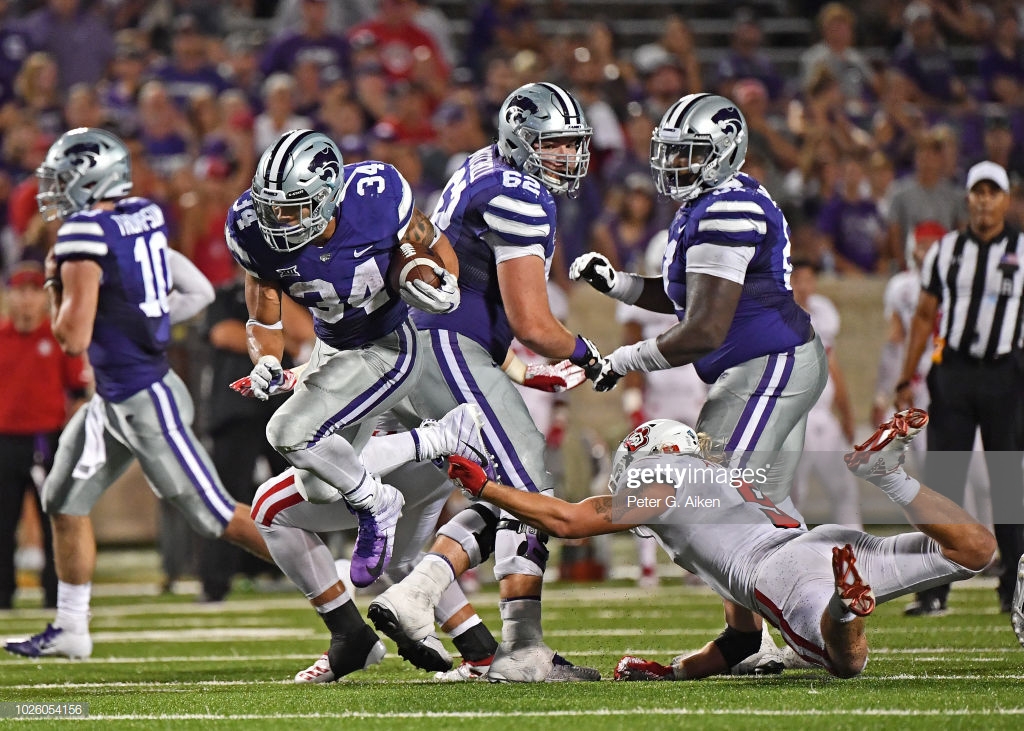 – Ideal frame and weight distribution for the position
– Physical, downhill runner that gets better as the game goes on
– Above average vision and sees cutback lanes before they develop
– Underappreciated athlete with light, soft feet and sneaky-good elusiveness
– Made major strides from junior to senior year
– Good hands for the position and can shake guys early after the catch
– Workhorse back that Kansas State leaned on with inexperienced QB play

Quietly, Kansas State running back Alex Barnes had one of the best seasons in the country for Power 5 running backs in Bill Snyder’s final year at the helm of the historic Wildcats program.

Despite putting up monster numbers, Barnes flew under the radar until he blew up at the NFL Scouting Combine, namely on the bench, putting up a position-leading 34 reps of 225 pounds, which also happened to be more than some offensive and defensive linemen.

Now, that’s not to say Barnes will be an automatic success because of what he did on a meaningless bench exercise, but what it tells us is that he’s a powerful running back, and that stood out on film almost immediately.

Against Texas in Manhattan, KS last season, Barnes ran with punishment on his mind, dishing out body blows left and right to Longhorns defenders.

Mississippi State also found out the hard way that Barnes is a load.

Barnes isn’t just a power back though. No, he’s not a home run threat, but I love Barnes’ feet and his ability to shift around with ease without losing any speed.

The Cactus Bowl against UCLA at the end of the 2017 season was a glimpse into what Barnes would become in 2018.

Watch the feet in the hole here by Barnes. He glides over the field, shifting his weight from left to right, allowing him to burst through the hole for the splash run.

As I said in the negative marks against him, Barnes does need a runway to get going in space, and you can see that here, but man, the footwork is impressive.

Throughout the 2018 season there seemed to be a lot of talk within Big 12 fan circles that Barnes simply wasn’t elusive and seemed to be playing in the wrong era of football. I didn’t come away feeling that way about the KSU back.

He’s underrated as an athlete and has some shiftiness to his game.

That Oklahoma State safety needs to pick up his jockstrap because it’s lying in the middle of the field. One thing is for sure: Barnes’ cuts are explosive and his running style catches defenders off guard because he sort of rocks defenses to sleep with his lumbering style.

Playing at KSU, Barnes wasn’t asked to be much of a pass-catching threat, but he has good hands and made some impressive catches last season, including this one against Oklahoma State before taking a big shot.

That’s a one-hand stab of the football, all while securing the catch and absorbing the big blow in the open field. Give me this guy on my team every day of the week, and twice on Sundays.

Yes, he’s an old-school style back with his running style and overall skill set, but he’s a durable running back that can serve as a change-of-pace back in 2019 and beyond for an offense that wants to run multiple systems. Personally, I would want him as my No. 2 behind a game-breaking running back, allowing me to put Barnes into the game in the second half to wear out defenses and salt away wins.