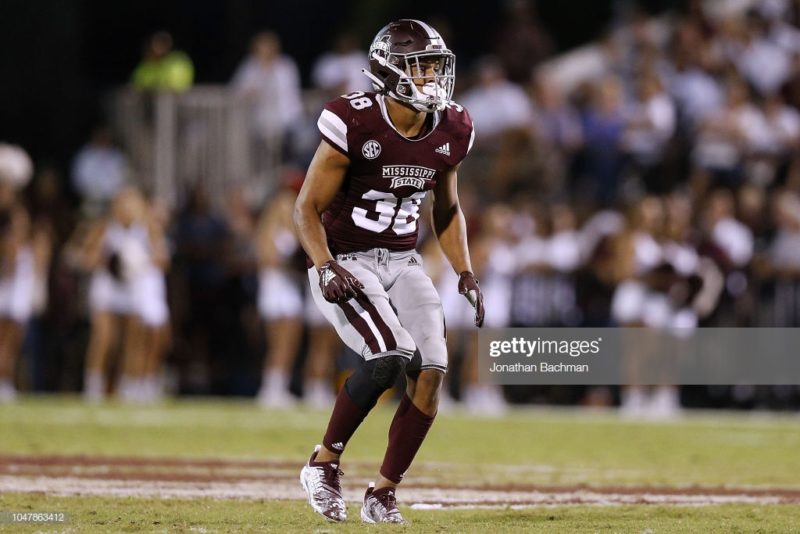 Mississippi State had an impressive defense in 2018 with players like Montez Sweat on the edge, Jeffrey Simmons on the defensive line and Johnathan Abram (#38) on the back end.

Abram is a versatile safety who was used all over the field. He lined up as a deep safety, in the slot and as a LB in the box.  When lined up deep they used a variety of coverages including using him as the single high, in two deep covering half the field and in Cover 3 in the middle of the field and outside. He shows good acceleration downhill but needs to come under control sooner and adjust his angles.  He’ll overrun the ball coming too fast and miss out on tackles.  It was hard to see his range when playing deep on tape but with his speed covering half the field shouldn’t be an issue.

Vs Louisville, from the deep safety position he comes in from off the screen and comes in hot and ends up bowing inside to outside and missing the tackle on the QB. Lamar Jackson is hard enough to tackle so he needs to play under control.

Vs Auburn, here is a good angle from the deep safety showing good speed to cover a lot of ground to cut down the RB to force a fourth down.

In the slot he played in Zone where he has good awareness of receivers in his area and likes to jam to get them off their routes as the come by.  He played in Off Man coverage as well but it was not a strong suit. He was high in his backpedal, not explosive in his COD and receivers were able to get his hips turned early go open up space. They used him often to blitz from the slot and he shows good acceleration to get in the QB’s face to force a quicker throw.

Vs Louisville, he has a good rep versus slot receiver closing quickly on the ball and getting his right hand in to knock the ball away.

At Alabama in the slot vs Jerry Jeudy who stems inside and then back out and Abram wrap an arm around his hips and gets away with a hold. This is probably not a good matchup for Abram but the grabby hands are not what you want to see.

At Alabama lined up in the slot he avoids the block of Irv Smith Jr to make the TFL and as he likes to do adds a few words for Smith at the end.

Vs Ole Miss in the slot on a go route he’s in good position looks back for the ball and then plays the WR to knock the ball out.

Inside the box he lined up in various spots as well. On the edge or off the ball in an inside linebacker positon. Over the TE to jam and drop into a middle Zone to mirror the QB. Even lined up in a 2 point stance over the guard to blitz or cover RB’s out of the backfield. He looks comfortable playing close to the LOS where he can react and attack with his speed in the short area.

Vs Louisville, he’s lined up as a linebacker and shows good awareness to recognize the reverse pass developing and works through the trash to get into the backfield and disrupt the play.

At Alabama, again as a linebacker he hesitates a bit but finds the gap to get into the backfield and help on the tackle.

Vs Ole Miss another example of his speed and awareness identifying the WR on the reverse and runs about 40 yards to get a TFL.

Abram has been talked about by some as a first round pick.  He’s versatile, has speed and has an aggressive style. Despite being used all over the field he is stronger in some areas than other and he play didn’t result in turnovers. His best fit would be as a safety that can drop down in the box and cover RB and TE’s. He needs to be able to control himself physically and mentally. Physically controlling how he attacks ball carriers with his speed and angle and mentally not allowing his emotions to take over and get him into trouble.