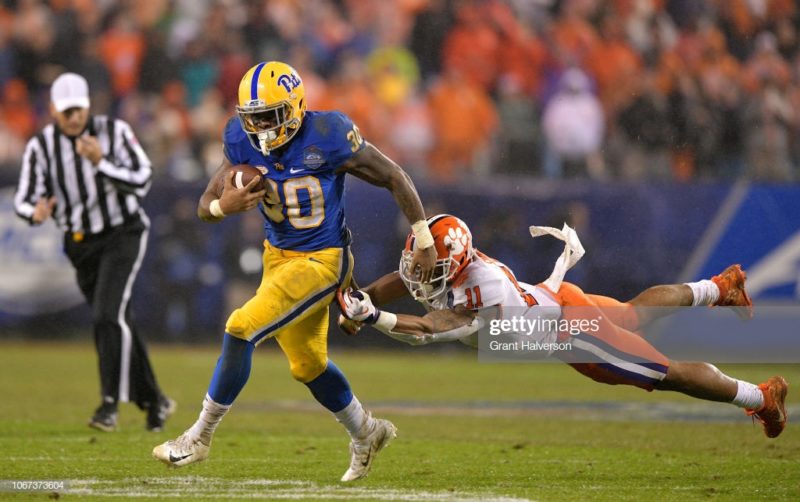 Though he split carries with Darrin Hall, Qadree Ollison still had a stellar senior season with the Panthers, rushing for 1213 yards with 11 rushing touchdowns. Averaging 6.3 yards per carry, the 6’1, 228 pound back bulldozed his way through the ACC and has created some buzz around his name. The Pittsburgh Steelers must have noticed Ollison’s production as they sent their running back coach to his pro day. It was not a far drive for the Steelers, as Ollison has played all of his college home games at Heinz Field and he carries a lot of traits that resemble a typical, smashmouth Steelers’ running back.

Ollison offers a good balance of physicality and vision, as he is capable of bullying his way for positive yardage but also shows patience in following his blocks. Watch on the play above as the Pitt running back bounces outside and then cuts back, against the flow of the defense to produce a big gain. He even pauses for a brief second before getting skinny through an arm tackle attempt. Ollison shows good decision-making skills as he allows his blocks to develop before making his way through an open gap.

One would expect that a running back pushing almost 230 pounds would have difficulty getting skinny through a hole but Ollison is not like most typical big backs. The running back shows good ability to get skinny through the hole and really maximize the yardage obtainable. On the play above, he splits through two Pittsburgh linemen before pummeling over a Penn State defensive back while also falling forward. This is just another example of the running back combining his vision with his physicality in order to produce a positive result.

Now that it has been established that Ollison has the processing skills needed to survive at the next level, it is time to move on to the bread and butter of his game – his physicality. Ollison embodies smashmouth football as he is a powerful and tough running back. Arm tackles are no match for him and he is consistently able to create yards after contact with his size and frame. Even when he is wrapped up like on the play above, he keeps his legs turning and is able to pick up about six extra yards. For most running backs, this run goes for no gain but for Ollison, who is wrapped up at the line of scrimmage, he is able to push forward for a gain of six. The Pitt running back was built for the physicality of the NFL and brings a winning mindset to the field.

If you thought Ollison’s lower body had some serious strength behind it, then you will be pleased to hear that his upper body is probably just as strong, if not stronger. Ollison has a nasty stiff arm that helps him win when he gets outside the tackles. Watch on the play above as he makes the Syracuse defender eat dirt with a powerful stiff arm. Ollison had a surprisingly amount of success running outside thanks to the fact that he has the physical skills to create additional yardage. If you are still not convinced, I invite you to check out Ollison’s 97-yard touchdown run against Virginia Tech, where he channeled his inner beast mode.

Ollison was able to channel his inner Marshawn Lynch and Derrick Henry on the play above as he literally throws the Virginia Tech defender off him on his way to a 97-yard touchdown. Like Lynch and Henry, Ollison has the physical traits to succeed at the next level.

The biggest flaw in Ollison’s game is that he lacks the athleticism and lateral agility to succeed. Due to his size, he does not have elite second level speed but that is not as much of an issue as his lateral stiffness. Ollison is not going to be the running back who can wiggle or juke his way out of trouble and his stiffness in changing direction sometimes rears its ugly head in the backfield. Watch how slow footed the Pitt running back looks on the play above as he tries to cut back and change direction. Though he still gains positive yardage, there seems to be too many steps in his trajectory.

Now for a redeeming end to this story, Ollison does have the potential to be a true three down back at the next level. He is a proven receiving option out of the backfield with 50 career receptions. He also has the size and frame to anchor in pass protection and will likely not be a liability in pass protection. Ollison definitely has the ceiling to be a three down back at the next level as his vision and physicality power his game. He can punish between the tackles while also utilizing a stiff arm to create yardage outside the tackles.

The Steelers sent running back coach Eddie Faulkner to the Pittsburgh pro day and you can bet he was watching Ollison and Hall in immense detail. Ollison definitely meets the size requirements that the Steelers presumably use when drafting running backs as all their recently drafted running backs have fit a common description.

Games Watched: vs Syracuse, vs Clemson, vs Penn State, vs Virginia Tech