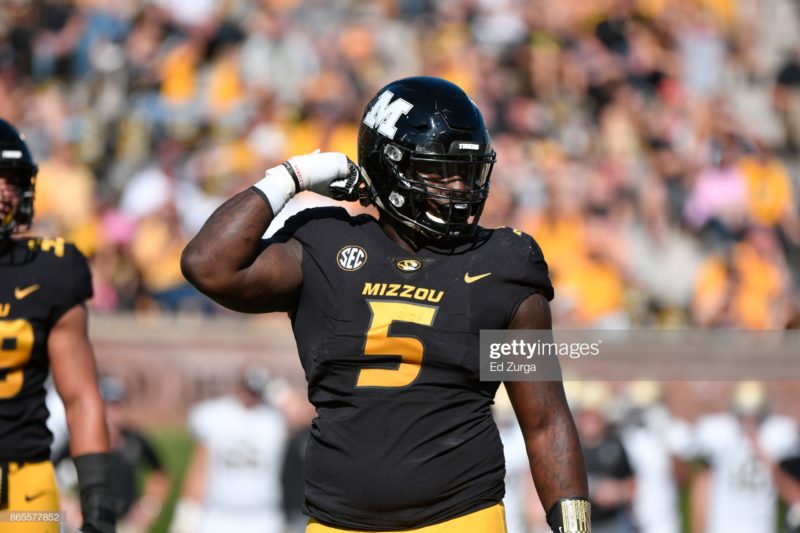 Highly rated and highly recruited out of high school Terry Beckner Jr (#5) looks the part of today’s interior defensive lineman. And there are moments when he shows great quickness and burst and will make a play that opens you’re eyes.  But those are few and far between.

I had watched a handful of game of Beckner’s games before his senior year and there was reason for optimism. After knee injuries ended his first two years he had a solid junior season especially the second half of the season where he had 5 sacks and 9 TFL in the last seven games.  There were things he needed to work but there was promise. From the first game I watched this go round I got the feeling that’s all it was, promise.

Let’s start with the good stuff.  He has very good athletic ability.  He plays mostly as the 1 and 3 tech a four man front but was used at the 4i position on Tite fronts and the 0 tech on passing downs. When he wants to he can be very quick at the snap, firing through gaps to make plays in the backfield essentially before the play can even get started.  He’ll use a swim/arm over move against the IOL leaving them grasping for him as he’s gone by. He has a strong rip that he’ll use if he gets leverage on the lineman when rushing the passer. As a tackler, he is violent.  He will sling guys to the ground with force and if he squares a runner up, he will try to split him in half.   If he channeled the energy he uses when tackling into the rest of the plays he might be a dominant lineman.

Vs Florida he is unblocked and after an initial hesitation he shows his acceleration to close in and sack the QB.

Vs Georgia lined up over the center, hands are up to keep the blocker off of him and he shows his athleticism to the outside to make the tackle.

At Alabama as the 3 tech on the right he uses a strong rip to the inside to get through the RG to get pressure on the QB.

At Alabama as the 3 tech he powers through the RG and shows his quickness to get the tackle on the RB.

The majority of the time he has average quickness at best at the snap but instead of firing out, he stands up exposing his chest allowing OL’s to control him regularly. His hands come out to a good position, into the chest of the blocker, but his hand fighting is very limited. He’ll try to get some push but if he doesn’t feel he’s getting movement, he’ll abort that effort quickly.  Rushing the passer he doesn’t have a plan. You don’t see a variance of moves and almost no counter. If there’s no gap he’ll pull back and wait to see if the QB scrambles out. He’ll occasionally give solid pursuit but really it’s only if he feels he has a chance to make a play.

Vs Florida this is what happens when you pop up out of your stance. Pancaked.

Vs Florida he pops straight up out of his stance and is unblocked. The running back runs right inside of him and there is minimal effort to try to get to him. With his athleticism there has to be more effort.

Vs Georgia lined up over the center. Stands up, feet don’t push forward at all and he ends up pushed 5 yards back into the end zone.

Vs Oklahoma State lined up as the 1 tech on the left take a couple steps forward to rush the passer, pulls back, circles out to the right. I understand he saw the QB look left and maybe tried to anticipate but he basically took himself out of the play.

So you can see he has some physical ability which makes him so frustrating to watch. You keep waiting for the switch to flip and see him dominate on regular basis and it doesn’t happen. After writing this report, I looked back at my notes from the summer and the areas to improve were: playing with consistent leverage, effort and add to his pass rush plan. In the games watched I saw no evidence of consistent growth in any of these areas and he must if he wants to stick in the NFL.

The question for teams is can you get him to do that on a consistent basis and if he can do it, why didn’t he do it in college? I want to see him play to his potential because he could end up being a really good IDL playing as the 0 – 3 tech in a 1 gap defense. How high do you draft an underachiever with potential?