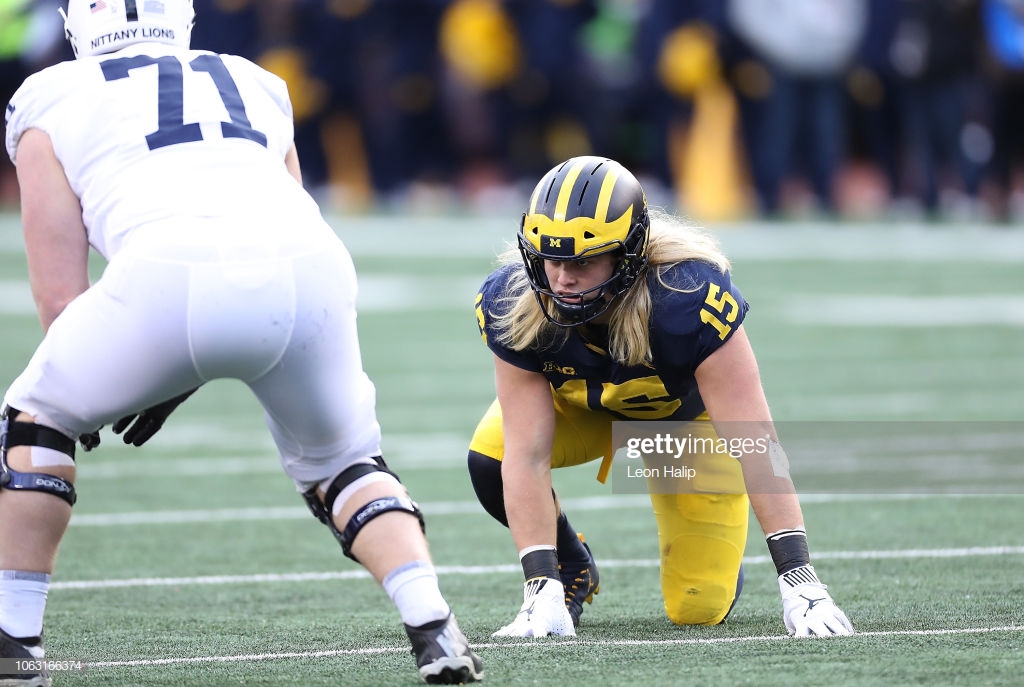 Watching tape of Chase Winovich (#15) can be kind of like playing Where’s Waldo as he was uses all over the defensive line. From play to play he would be lined up to the left or right, strong or weak side, and inside or outside. Playing for Don Brown, Michigan’s defensive coordinator, he was used primarily on the edges but would also line up inside as a 3 tech or even the 0 tech.  His stance varied as well depending on the situation and where he was using a 2, 3 and 4 point stance.

Against the run, his quickness is good at the snap getting off the ball quickly and getting his hands up quickly to take on the blockers.  He identifies run quickly and plays aggressively using quickness to cut into gaps vs Zone runs and take on down blocks and pulling offensive lineman to attempt to clog running lanes on Gap runs. On runs away from him he displays awareness and speed to chase down runners behind the LOS. It is nice to see a player who wraps up when he tackles not just trying to knock the runner down with a shoulder. When setting the edge on runs his way he shows good recognition and is solid with his hands to keep blockers off of him. Some area’s to improve include following the ball through the mesh point, using his inside shoulder while taking on blocks and getting depth when setting the edge to cut off the outside for the back.

At Purdue quick recognition and COD to see the tackle pulling outside, beat the down block of the TE and get outside to force the run back inside.

At Notre Dame here is the aggressiveness taking on the pulling blocker he gets a good punch to stand up the OC and make the TFL.

At Ohio State they leave him unblocked from the backside and he shows good burst to get down the LOS and make the TFL.

Rushing the passer, again he shows good quickness at the snap and does a nice job varying his pass rush to keep the lineman off balance.  He uses his hands well to get the OL hands off him using slaps, chops and hesitations followed by quickness to make him a slippery target. His assortment of rush moves include a rip, swim, club, long arm and can surprise with a solid bull on occasion. He also varies inside and out so he seems to have a plan each time out and will counter quickly when that doesn’t work. His play strength could use some improvement to help him win more on power rushes. Long armed tackles can give him trouble pushing him up the arc and would like to see him improve on recognizing screens.

At Purdue rushing from the right edge he uses a quick nod inside with a swipe of the LT’s hands to get the sack.

At Notre Dame lined up over the LT it looks like a push pull to displace the blocker and get pressure to force the incompletion.

At Notre Dame this is a good, bad and good play. He starts his chase after the QB rolling out. He realizes the screen and retreats. But then he overruns the receiver but showing his motor chases downfield to make the tackle

At Notre Dame rushing from the left edge he jabs out, in, out and yanks down the left tackle and meets Devin Bush (#10) at the QB.

Vs Penn State from the 5 tech he uses a club to the inside to beat the RT and get the sack.

He isn’t the strongest or the fastest but he has a high motor and will bring the effort play after play no matter what he is asked to do. I felt he was quickest playing from a 2 point stance and think that would be ideal for him at the next level to use his quickness and moxie to make plays. Coverage is going to be a question that needs answering as he wasn’t asked to do it in college. He’ll be someone I think the Steelers would take a good look at over the next couple weeks.