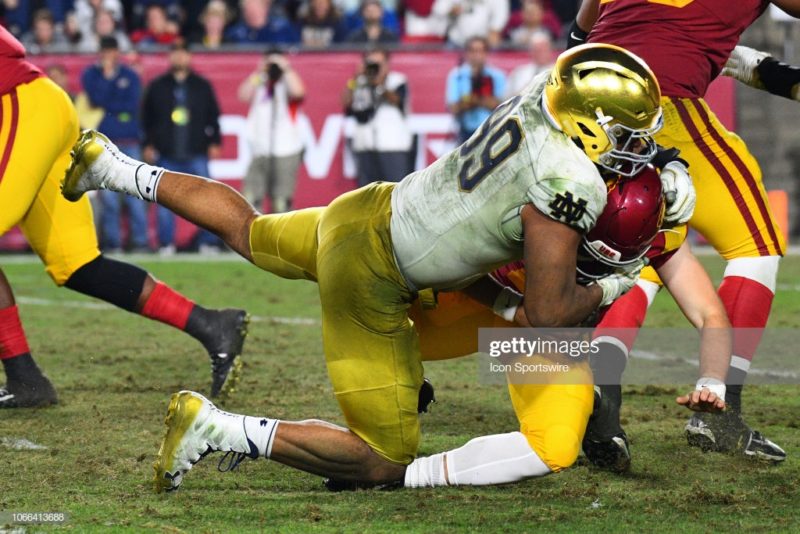 Against the run, he plays with good leverage and quickness at the snap and gets his hands up quickly into the chest of the OL. He has the arm length and the strength to keep blockers off his body allowing him a chance to displace the blocker and make a play on the runner. Shows a solid anchor and does a nice job fighting through double team and combo blocks. He shows solid awareness to identify the play and pursues well to the outside. He’s generally a good tackler and can use one arm to make stops when engage but did miss a couple tackles in the games watched. He can get reached by quicker OL on Zone runs and needs to speed up his timing to shed blocks. To me, he didn’t stand out in 1 Gap or 2 Gap having varied success in both schemes so could fit in either.

Vs Stanford he’s the 3 tech on the left side. He fires out low, his helmet lower than the OL’s, he gets in the crack between the RG and RT combo block and when the RG releases to the second level he shows good play strength to work under the hook of the RT to get in on the tackle.

Vs Stanford defending the goal line the LG tries to cut block him, he block misses but somehow Tillery goes down anyway, but shows quickness and athleticism to get up, chase and tackle.

At Virginia Tech facing a double team block from the RG and RT he twists and drops to one knee to reduce surface area and slide between the block to wrap up the RB.

Rushing the passer, he improved his hand usage from a year ago and will vary the moves he uses on blockers.  He had the most success with hand swipes, rip moves and a push/pull to yank OL off balance. Late in the season they ran a lot of stunt having him penetrate or loop to the outside which I feel took away from his rushing abilities. Personally, I’d rather stunt him from out to in or ideally just let him go one on one inside while trying more bull rushes. He also tried some spin moves late and was making better contact with his club. Had a huge game against Stanford with 4 sacks but only had 3 the rest of the season. Also, he had improved awareness on screens and swing passes making more plays chasing those down.

Vs Stanford working against the RG he stabs with the right hand, swipes with the left hand and then long arms with his right with good leverage to push him into the lap of the QB.

Vs Stanford here he is as the penetrator on the stunt. He shoots wide to try to get the LG to follow him and push the LT up the arc to allow the looper to come underneath him. When the RG picks up the looper, Tillery has the lane inside of the LT and shows pretty good bend and forces the fumble.

Vs Clemson he doesn’t get to the QB here but shows good hand placement to the chest of the LG and the strength to yank him to the ground.

So where does he fit? He played mostly inside in college but possesses the size and arm length to play the 5 tech. Personally, I like him better playing in a 2 gap system and could be effective with improved ability to shed but he could operate in a 1 gap as well. He could back up all three DL spots and be used to rush from the inside in sub packages. However, he will probably go in the draft before the Steelers would like to address the DL depth issues.