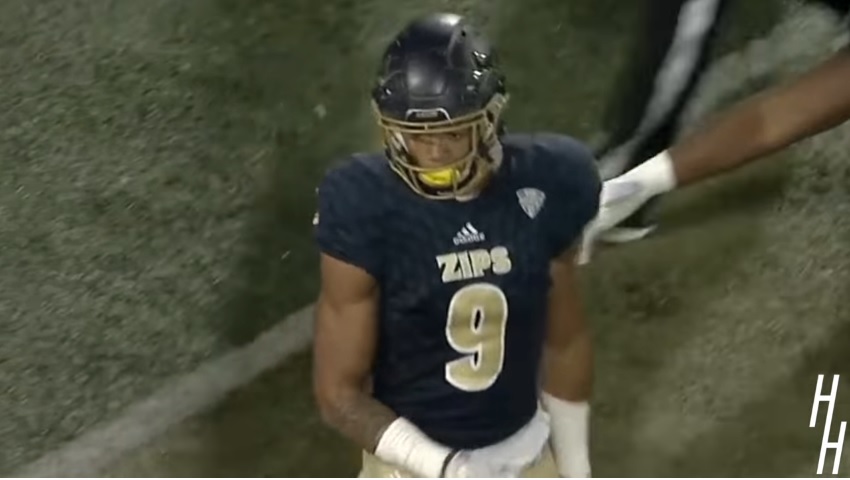 – Excellent length for his frame (34 1/4 inch arms)
– Quality athlete and easy mover with sideline-to-sideline range
– Fantastic first step and shows explosion off the ball (confirmed by 1.58 ten split at Combine), disruptive in run game and capable of stressing tackles off the edge as a pass rusher
– High motor player and chases the ball all around the field
– Impact tackler who generally finishes plays
– Didn’t drop much in college but looked fluid and comfortable moving backwards in Combine drills
– Shows potent inside spin move to counter tackles who cheat and expect speed/edge rush
– Proper hand placement in run game and as a pass rusher
– Though sack total was low, impact player in college with good production
– Decent starting experience

– A little light and could stand to add a little bit of weight to fill out his frame
– Lacks clear, go-to move as a pass rusher
– Underpowered and struggles to push pocket with his bull rush, tends to get knocked around in the run game when facing base blocks by tackles
– Hands too easily chopped to disrupt his rush
– Hand use overall is underdeveloped, too often stuck and leans on blocks
– Tape doesn’t always match his three cone time (7.00), struggles to turn the corner consistently and first step momentum can carry him upfield, lack of power makes him too easily controlled, even when tackle is initial beat
– Primarily played one spot (left defensive end), didn’t often play with his hand up and didn’t see him drop into coverage
– Doesn’t have a lot of sacks in his career

Davis was one of the players who caught my eye at the NFL Combine. Fast and fluid, I was excited to take another look at him. Some of what I saw matched what he did at the Combine. But some of it didn’t.

What absolutely stands out about his game is a quick first step. His ability to time the snap and explode off the ball is arguably about as good as you’re going to find of anyone in this year’s class of pass rushers. Couple examples of that. Left end in these clips though he’s an easy guy to spot. Literally jumps off the screen at you.

The best move I saw him put on, in more than one game, was an inside spin. Good counter move to tackles who begin to overset and expect him to rush wide, or part of stunts/blitzes where the guard is going to be occupied, leaving the B gap open.

Davis is a high effort player who chases the ball and because he’s a good athlete, can make plays downfield. Like that combination.

Unfortunately, there’s plenty to work on, too. Davis is underpowered and underdeveloped as a pass rusher. When I look at these guys, I ask myself, what’s his number one move? You don’t need seven different ways to get to the quarterback. Some of the best pass rushers in football history had just two; James Harrison, for example, had his rip and speed bull rush. Dwight Freeney had his speed rush and spin. Reggie White dominated with his hump move, Deacon Jones with the now-outlawed head slap.

But for Davis, I’m not sure what that #1 move is. That spin can be a great #2 but isn’t going to be your “main” rush. While he possesses that great first step to initially win the edge, I don’t see as much bend in his game. If anything, that first step can get him upfield too far and pushed up the arc, like it does here. He beats the right tackle off the line but can’t flatten and turn.

Not much on this bull rush either.

Similar issues pop up in the run game. That’s why you’re seeing a guy with a wheelbarrow full of tackles for loss but only a handful of sacks. If a guy can’t have more than 5.5 sacks in a season from his high school career to the end of college, especially when you played in the MAC, not the SEC, you’re probably not going to all of a sudden have double-digits when you get into the NFL.

Honestly, I would consider a position switch. Play him as a WILL linebacker. Let him chase plays from the backside, play a little cleaner, shoot gaps, and I think he has the skillset to do well in coverage, too. But he’s not your “guy” as a pass rusher and he’s not playing as a strong side end either due to a lack of size. Move him off ball and you might have something. Keep him on the edge and you’ll always be looking for more. Should be a quality special teamer though.

Reminds me some of what Barkevious Mingo became, not how scouts initially projected him.