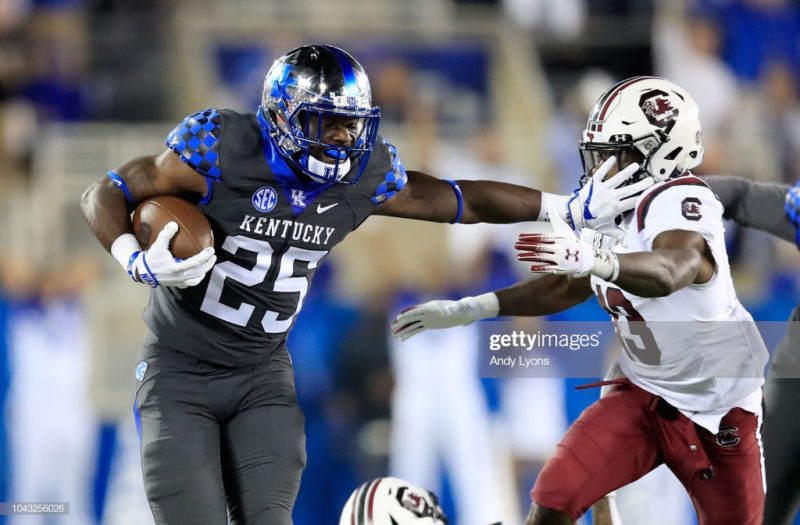 Kentucky’s Darius West put together his best body of work during his senior season, recording 86 tackles, three interceptions and six pass defenses. His work did not go unnoticed as he was invited to the 2019 Senior Bowl. It was a great redemption season for a safety that has broken the same leg three times since high school and also suffered a ruptured patellar tendon in 2016. Despite his lengthy medical history, West showed some promise as an in the box safety during his time at Kentucky.

The easiest part of West’s game to recognize is just how well he comes downhill against the run. With his 4.39 speed, the Kentucky safety has the straight-line speed to be a great fill in against the run. He can play in the box or he can come downhill and make numerous stops for minimal to no gain. Physicality is also another feature of his game as the safety does not fear contact or getting his hands dirty in the trenches.

When I say that West’s ceiling may be boxed, I almost mean it literally as the safety best projects as an in the box safety. He is a thumper and is definitely better suited for playing in the box rather than in the secondary.

West also makes his presence felt throughout the middle of the field. In an era where big, violent hits have almost been outlawed from the game, West’s physicality is a breath of fresh air. The Kentucky safety is great at breaking up crossing routes and drags across the field. Watch above as he packs a big punch and is able to dislodge the football for an incompletion. While he may struggle as a single high or cover two safety, there is room for West to perhaps slide into a ‘dimebacker’ like role.

Here is West playing higher than usual in a cover 2 zone coverage. West is responsible for the left half of the field and there are more than a few noticeable problems with this play. First, he gets stuck staring into the backfield and does not pick up on the outside receiver running a go route down the sideline. Secondly, he does not have the range or natural lateral athleticism to get to the sideline fast enough to be in a position to make a play on the football. There really seems to be no room for West to play in the deep secondary at the next level as he has poor instincts and poor route recognition.

Another problem in West’s game is though he is gifted with in the box necessities such as size, physicality and downhill speed, he really struggles at the basics. The basics being tackling. West’s tackling is just far too inconsistent to be trusted. While he does not shy away from getting involved, he really struggles to show proper tackling technique on occasion. Too often he does not attack the ball carrier head on and instead tries to wrap up with her arms off balance. This leads to many missed opportunities and missed tackles.

Not making his case any easier is his extensive injury history. West has broken the same leg three times and then also ruptured his patellar tendon during his 2016 season. One has to wonder about his durability at the next level.

Overall, West is a very limited player who is defined more by his limitations than his potential. The Kentucky safety is strictly an in the box safety who can be a fill against the run and defend any short to intermediate routes. He lacks the instincts and athleticism to succeed as a free safety and his extensive injury history will surely get questioned as he goes through the pre draft process.

Games Watched: vs Central Michigan, vs Mississippi State, vs Vanderbilt, vs Texas A&M