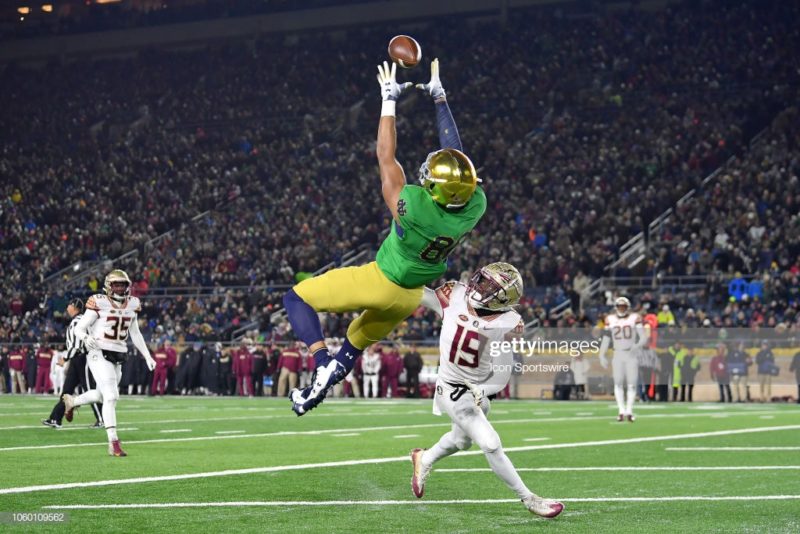 Notre Dame tight end Alize Mack put together his best season yet during his senior campaign, totalling 36 receptions for 360 yards and three touchdowns. With a decent final season and a strong showing at the NFL Combine where he ran a 4.70 40-yard dash and had 22 reps on the bench press, Mack has been slowly working his way into some notable discussion as a worthy option.

Mack is a great vertical threat, as his straight-line speed is great for exploiting mismatches on slower footed defenders. Mack can be utilized best as a vertical threat up the seam or sideline as his 4.70-speed shines through his tape. Oh, and what a catch! Mack is a consistent contested catch winner. Watch as he high points the football, showing off his length and is able to hang onto the football even through a nearly decapitating hit. While the hit laid onto Mack likely would have left mere mortals hospitalized, Mack was able to hang on and stay in the game.

The Notre Dame tight end has very strong hands and is a very reliable option for the quarterback. Watch on the play above as he is able to snag a very high pass. With his incredible size (6’4), length, and hands, it is very hard to be inaccurate when throwing to Mack. The tight end has a huge catch radius and can be counted on to continuously bail out his quarterback with big grabs.

While the ball does not come his way on the play above, it does showcase Mack’s ability to release off the line. He shows the ability to get separation off the line of scrimmage with his footwork and physicality. On the play above, Mack steps outside before working back inside to get the inside release up the seam that he needs.

Using a view from the endzone, you can truly see the speed that Mack possesses. With a safety overtop, the tight end is not open but he shows a good understanding for working back to the play and giving his quarterback an option. While it is a highly unorthodox throw that would make quarterback coaches cringe, Mack is able to bail out his quarterback with a great catch. If you are going to be throwing across the field, it better be towards your 6’4, 250-pound tight end.

Now the problem with Mack’s game is that he is extremely limited as a route runner. While he excels on vertical routes and can stretch the field, he really does not have the athleticism to be sharp route runner. These back to back plays above detail just how slow- and heavy-footed Mack is when cutting in or out of his routes. Running an in on the first play, Mack is just way too slow on his break. The route is the furthest thing from sharp as he curls the route dramatically.

On the second play, he cuts outside and it is still not as sharp as it needs to be. Add in a late throw and Mack is stopped well short of the endzone. The tight end offers little yards after the catch ability because of his poor route running, not giving him the space to reassess the open field after securing the catch. For Mack to succeed at the next level, he is surely going to have to find a way to sharpen his routes.

Mack offers a mixed bag of results as a blocker. As a run blocker, he shows promise in his ability to outmuscle his opponent. Watch on the play above as he pins his assigned defender, leading to a big touchdown. Pass protection is another story though as Mack struggles to hold his own against faster, more athletic pass rushers. He struggles to translate the weight as he tries to keep up with his opponent’s pass rush and his footwork is too slow to keep up. There is definitely potential to be a promising blocker but it is still a bit away.

The Notre Dame tight end is an intriguing option because of his vertical ability and ball skills. Lined up next to the formation or in the slot, his speed is a mismatch for linebackers and his size is a mismatch for defensive backs. Mack has the ability to outrun defenders while also possessing the physicality and hands to be a contested catch winner. Often times, the tight end looks like an NBA player jumping up for a rebound when trying to high point a football. Despite his vertical ability, his route running cannot be ignored and will likely be the one trait that truly holds Mack back. Mack has the ceiling of being a spot starter but more likely will fill in as a quality #2 tight end on the depth chart with his receiving abilities.

Games Watched: vs Michigan, vs Virginia Tech, vs Boston College (2017)