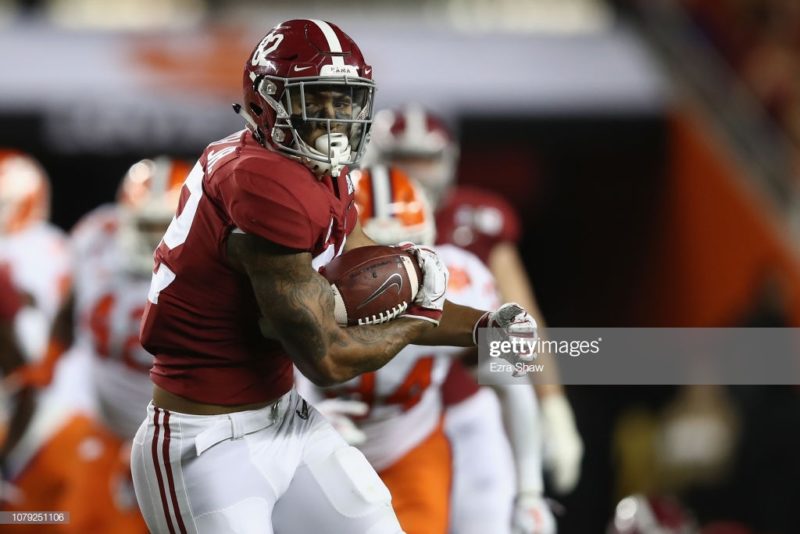 Alabama tight end Irv Smith Jr. took a big leap in 2018, becoming one of the top tight ends in the nation with 44 receptions, 710 yards and seven touchdowns. Looking at Smith’s 16.1 yards per reception and the fact that 11 of his 44 receptions went for 20+ yards, it is easy to determine that the tight end was an elite vertical threat. Another area of Smith’s game that is elite but fails to be picked up on by statistics is his ability as a run blocker. In a loaded tight end class, Smith is one of the best run blockers in this year’s class.

Smith is an elite run blocker, he is incredibly strong and his powerful lower base gives him the ability to drive defenders backwards. This is incredibly consistent throughout his tape. Watch on the play above as the Alabama tight end takes the Arkansas defensive lineman for a ride spanning about five yards before finally driving him into the ground. Smith was instrumental in Alabama’s effective run game. He not only showed ability to block from the tight end position but he also showed he could be an asset blocking from the H-back position, which was evidently on display against Georgia in the SEC Championship game. When it comes to run blocking, Smith is about as NFL ready as they come.

The Alabama tight end is also quite the deep threat. Smith ran a 4.63 40-yard dash at the NFL Combine but his speed has been no secret to those who have watched Alabama play. Vertical routes, whether they are up the seam or down the sideline are the bread and butter of Smith’s game. Watch on the play above as the tight end creates more than enough separation down the sideline, giving his quarterback a big enough window to fit in the football. Smith finishes the play by coming down with the football through contact.

Another example of Smith’s big play potential on display above. The Alabama tight end’s explosiveness reminds me a lot of current Pittsburgh Steelers tight end Vance McDonald. Both tight ends have the potential to turn any play into a big one with their speed and physicality.

Smith does not have the looseness of a modern day receiving tight end as he is somewhat stiff when it comes to lateral agility but that is not a problem. The tight end is able to create yards after the catch with his physicality and ability to bounce off defenders. On the play above, Smith is able to create more than 20 yards after the catch thanks to his contact balance. He bounces off three tackles before the fourth is able to not only tackle him but also dislodge the football, though it is luckily recovered by Alabama.

The seams are where Smith made his living last season and he shows that he can use a variety of techniques to get open there. Watch on the play above as he works through being bumped off the line of scrimmage and then is able to use his body to frame himself from the defensive back. He also showcases strong hands on the play, catching a ball away from his body with a defender right on his back.

Another example of Smith working the seams, this time with a linebacker underneath and a safety over top. The Alabama tight end gets limited separation but he is able to get just enough to turn the linebacker around. From there, he makes a great contested catch before fumbling and recovering his own fumble.

For those of you counting at home, that is twice that Smith has fumbled. Ball security is certainly one aspect of his game that he is going to have to work on. Other than that, his limitations are very self explanatory. He is slightly undersized with a short wingspan for a tight end, though that did not stop him from producing last season. He is heavy footed when it comes to breaking in or out on his routes. Hardly a deal breaker though as Smith has shown he is a great vertical threat.

At the end of the day, the Alabama tight end will make a great addition to the team that selects him. Smith proved himself to be a more than capable run blocker and a great vertical threat with big play potential. While some may point to his lone season of production as evidence of his inexperience and raw talent, I challenge back with the notion that his inexperience alongside his production could be a sneak peak at the high ceiling that Smith offers. If the Steelers are in the market for a tight end and Smith is still available in the second round, his talent would be tough to pass up.

Games Watched: vs Auburn, vs Clemson, vs Arkansas, vs Louisville, vs Georgia