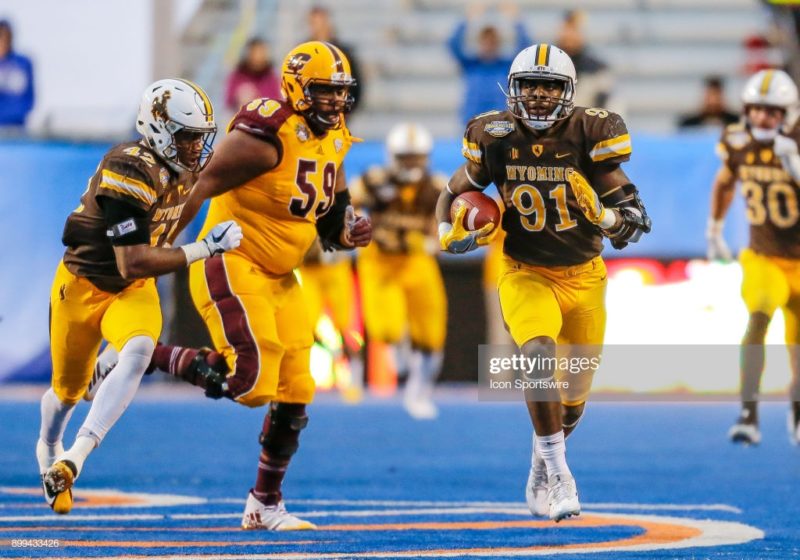 Carl Granderson (#91) is long, lean Edge defender who is growing into the position. Literally. When he showed up for his freshman year he weighed in at very lean 185lbs. About 70 pound later his now ready to enter the NFL draft.

Against the run, on plays flowing away from him he does a solid job to shuffle down the line to cover cut backs and gives good pursuit chasing plays away from him.  He’s able to use his long arms to wrap up runners and get them down.  On plays to his side going outside he lacks the quickness and ability to diagnose quickly enough to beat blockers to the outside. He prefers to not square up and take on blockers but more often than not will duck under a blocker, usually to the inside, and will leave the outside open for runners. He has flashed the ability to hold off blockers and shed them with a strong yank but there were very few of those.

At Iowa here is an example of how he “takes on” blocks. He is lined up on the left edge and reads the OL blocking away from him and follows. When the pulling LG comes to engage him he jumps two yards back and away from him. Not good.

At Iowa he’s on the left edge in goal line.  Uses his hands to avoid the cut block, scrapes behind the LOS and gets in on the tackle

At Iowa lined up on the left side this was one of the times he uses his hands and was able to yank and shed T.J. Hockenson (#38) and make the tackle.

As a pass rusher, he is solid getting off the ball but does not accelerate quick enough to get on the hip of the OT and put pressure on him. On the instances he does get around the blocker he is able to flatten out quickly to face the QB. He tries a variety of moves including spins, rips and long arm that were all generally unsuccessful and doesn’t used his hand well enough to keep the blockers hands off of him. The one move he has success with is a hesitation with a dip inside or he’ll slap/swim inside where he is able to get pressure. He has very limited experience doing spot drops in Zone coverage and didn’t look comfortable doing it.

At Iowa on the left edge he uses a swipe to clear the RT’s inside arm and swims over him to lunge at the QB and force the fumble.

At Missouri lined up on the left he gets vertical quickly against the RT and again flattening to pressure and force the incompletion.

Vs Air Force on the left side he does the hesitation and jump to the inside to beat the right tackle and chase down the QB.

Granderson is a work in progress. He shows some qualities that could make him an effective pass rusher but needs to improve his hand usage and build up play strength just to get in on passing downs. If he wants to play more than that he’ll have to start taking on blocks to do his part to not leave teammates out to dry.  The pending charges against him are another issue all together.

Just based on the football side of it, he is not someone I would use a pick on as there is too much work that needs to be done defending the run, using his hands better and learning how to play in coverage.