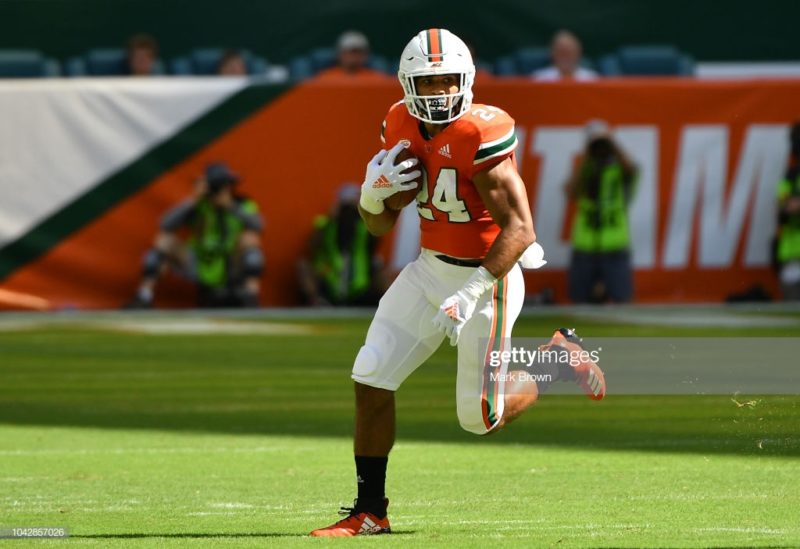 Running back is not a major pressing need for the Pittsburgh Steelers and one figures that if they do draft a running back it will come in the later portions of the draft. Should they plan on drafting a running back, there are more than a few reasonable running backs to consider, one being Miami’s Travis Homer. The 5’10, 201 lb running back is slightly undersized though that did not stop him from nearly exceeding 1000 rushing yards this season and surpassing Frank Gore as Miami’s 12th all-time leading rusher.

Homer ran a 4.48 40-yard dash and his speed is evident on his tape. The Miami running back has a quick burst and has the speed to evade danger. Homer has the speed to not only get to the outside when necessary but he is also capable of flying down the sideline. Watch on the play above as he takes the handoff, presses the line of scrimmage, realizing there is nowhere to go and then turning on the jets up the sideline. Homer really can be utilized well as a typical undersized speed back who can make defenses pay when they fail to wrap him up quickly.

Though he sometimes struggles to consistently burst to line, sometimes showing indecisiveness, Homer can really burn defenses when he pushes full steam ahead. Homer ripped a big run against Virginia, quickly hitting the line of scrimmage and finding a hole using his adequate vision. The Miami running back possesses above average vision as he is capable of navigating through traffic. From there, he is off to the races, showing off his 4.48 speed until he is caught from behind by the blazing fast Bryce Hall.

The biggest knock on undersized running backs is their lack of power and contact balance. Homer makes sure those concerns are nothing more than baseless assumptions as the running back possesses a large amount of contact balance and toughness. Homer breaks not one but two tackles on the play above, throwing aside Florida State defenders like he is the Hulk. Teams will not have to worry about Homer going down at first contact as the running back is incredibly tough and seeks out contact, often overpowering them as well.

Unfortunately, like a lot of under sized running backs, Homer really struggles up the middle when there is nothing for the taking. He is not going to be a running back who can create yardage for his team and his lack of consistent burst really hurts himself in these situations. His slight indecision along with the Miami offensive line being pushed back leaves Homer with nowhere to go and a loss of yardage.

Other knocks on Homer’s game is ball security issues as he has put the ball on the ground six times in his career. Homer fumbled four times last season which will surely be remembered by coaches and scouts. Another concern with the running back is that he too often seeks contact instead of searching for a better or safer option.

When it comes to being a third down back, Homer is arguably one of the best in this year’s draft class. The most frequently asked demand from running backs going pro is if they can pass protect and Homer shows to be pretty skillful in pass protection. The Miami back anchors well, holding his own against oncoming blitzers. He also shows high football IQ, showing the awareness to pick up oncoming blitzers. Homer also makes due as a pass catcher, showing nice, strong hands recording 37 receptions over his career.

Homer best projects as a better than average change of pace back who has capable speed and elusiveness to survive. His true stand out trait is his toughness and contact balance which are traits not typically seen with smaller, undersized backs. The running back will enter the NFL as an already proven third down back with room to grow from there.

Games Watched: vs LSU, vs Florida State, vs Wisconsin, vs Virginia Tech