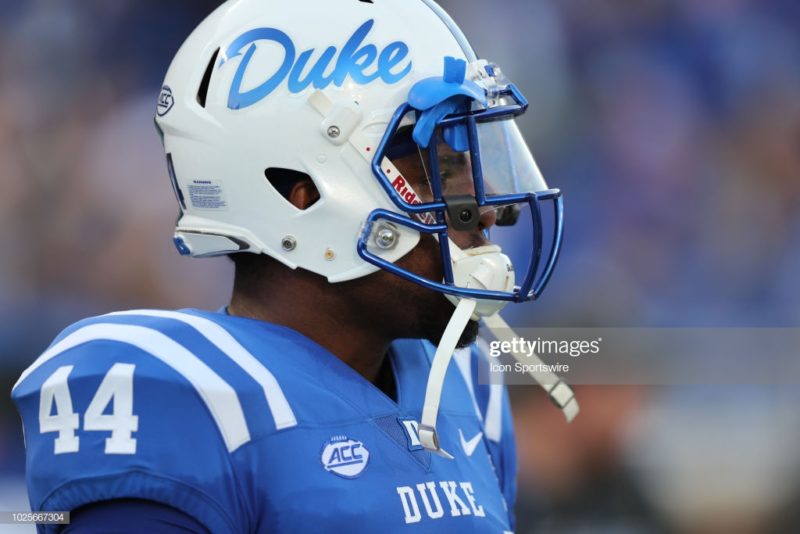 The need for a linebacker is well documented so let’s take a look at another. Joe Giles-Harris (#44) was listed as the WLB in their defense which mainly a four man front with only 2 linebackers but operated in the middle as well as the weak side. He has good size and solid speed (when you don’t compare him to the 2 Devin’s).

Against the run, he his solid processing on inside runs identifying the correct gaps and when engaging a blocker has good hand placement into the chest to keep him away from his body. He struggles to disengage from these blocks and ends up being taken out of the play. I’m not sure the reason here. I to could be effort, play strength or technique but once locked up with a blocker he doesn’t separate.  When unblocked he doesn’t always attack downhill into the gaps whether to fill vs a blocker or engage the runner. He’ll hang back and wait for a blocker or runner to arrive to him. When used to mug the B gap he showed good quickness to swim over the guard and get in the backfield and does a solid job to work through the trash to get to the ball.

At Virginia Tech he’s the right LB and the gap develops right in front of him. When the RB gets the ball they’re about 6 years apart. Instead of working downhill to the ball he waits and what could have been a loss is a 3 yards gain.

Vs Virginia in the red zone he reads the play and finds the right gap to get into the backfield and latch on to the RB.

Vs Virginia he creeps up to mug the B gap and slips inside to the A gap to hit the RB in the backfield.

Vs Pittsburgh another red zone rep where and he reads the pulling OL is able to move laterally around him and make a solid tackle here.

On outside runs, I think he processes even better processing and gets moving laterally quickly with solid speed. His angles can be too shallow at times allowing runners to beat him to the edge leaving him to make reaching or diving attempts. He’s susceptible to scoop and cut blocks not recognizing blockers in his peripheral vision when scraping and spends more time on the ground they you’d like. Overall, when he gets to a ball carrier he wraps him up but in the games watched he lacked thump in his game. There were a lot of wrap and wrestle waiting for teammates to show up or the whistle to blow.

At Northwestern he reads the run to his right avoids the cut block on this one to chase down and wrap up the runner.

Vs Pittsburgh he recognizes the Jet sweep and shows good pursuit to the outside and get a hand on the WR to get him down.

Against the pass he didn’t offer much as a pass rusher except for occasional blitzes from the middle or the edge but he lacks a pass rush plan and unless there was a lane he wasn’t helping. He was solid in Zone coverage getting good depth and looking fairly comfortable.  He had good awareness in his area and did a nice job disrupting the underneath routes. He played a little Man coverage in the short area on RB/RE mostly on flat and curl routes.

At Virginia Tech he’s split near the slot receiver. Good processing and quickness to get downhill to attempt a play on the receiver. He slips off here but I like the recognition.

At Miami on a 2 point conversion attempt he shows good acceleration to the outside and chases down the QB.

These are some of the good things he showed and one not so good. You can see in some of the run how he doesn’t get tacklers down quickly and I didn’t think you needed to see him not disengaging from a block.

Ideally he would fit as an ILB in a defense where the defensive line is tasked with occupying blockers and keeping the linebackers clean to allow him to chase down runners.  He needs to work on bringing his hips through the tackle to add more thump and learn how to disengage from blockers. In the passing game I think he would be okay to cover in the short area but I would need to see more as far as Man coverage on intermediate routes and carrying up the seam to consider him a true 3 down linebacker. I’m not as high as him as other reports I’ve seen but he would be serviceable back up year one and with improvement a solid starter sometime after.