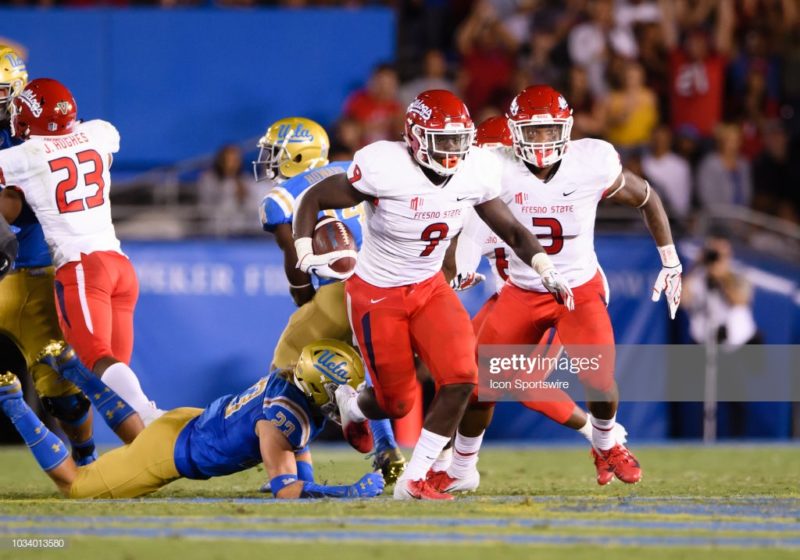 Fresno State linebacker Jeff Allison is one of the more talented prospects to come out of the Mountain West Conference. The linebacker has a claim to the best defensive prospect from the conference as he was the 2018 Mountain West Defensive Player of the Year. This was after he finished his final year at Fresno State recording 120 tackles, 5.5 tackles for a loss and two interceptions. The linebacker may not go on day one or two but his ability is definitely worth looking into.

Let’s make one thing clear – the Fresno State linebacker is always around the football. Allison is not overly aggressive, which is his why his tackles for a loss total is on the low side, but his wait and see approach leads to a lot of tackles. The linebacker is great at reading his keys and waiting for an open opportunity to wrap up the ball carrier. While his patient approach will not lead to many plays in the background, you can count on Allison constantly being around the football. Allison rarely takes bad angles and always finds a way to the ballcarrier.

Two aspects of Allison’s game that are virtually guaranteed, the first is that he will always be around the football and the second is that he is going to play physical defense. Allison has a physical tone to all his hits, making sure his victims feel his physicality. Watch on the play above as he sniffs out a screen pass and delivers a punishing hit.

Allison is a tackling machine and it is generally true that if he is given space to diagnose and operate, he will get the job done. That is the reason why he has racked up over 120 tackles in each of the last two seasons.

While Allison racks up many tackles, he leaves a significant amount of tackles on the field as well. Too many times the linebacker comes flying in hot but fails to finish. Allison will have to do a better job at tackling under control as his extreme boom or bust tackle style is not going to make a lot of fans at the next level.

Another notable area of struggle for the Fresno State linebacker is his ability to shed blockers.  While Allison excels at operating in space, he is not so efficient when he has to shed blockers to get where he needs to be. Often times he is overpowered or swallowed by blockers hitting the second level. Watch on the play above as Allison is taken out of the play by being shoved to the ground.

Allison may have had a career high 17 tackles against Nevada but that does not hide the fact that it was one of his worst showings in coverage. As I was watching, I was just waiting and waiting for Allison to come down with an interception as he continuously came only inches away. Besides failing to record an interception, he also had a few bad reps in coverage, including the play above. Allison struggled to show good awareness in his zones as he allows a crosser to run by him and sit in his zone. I will admit though that Allison is more than capable of dropping into short zones, though he does need to show more consistency and awareness.

Overall, Allison will make out to be a great late addition to the team that selects him. While his ceiling is limited, he is a proven run defender with a nose for the football. His tackle numbers will likely mean that Allison will get many special teams reps as he is given time to progress. While he may never be All-Pro, NFL teams can never get enough of proven competitors as Allison’s back to back 120 tackle seasons and 2018 MWC Defensive Player of the Year award would suggest.

Games Watched: vs Toledo, vs Minnesota, vs Nevada