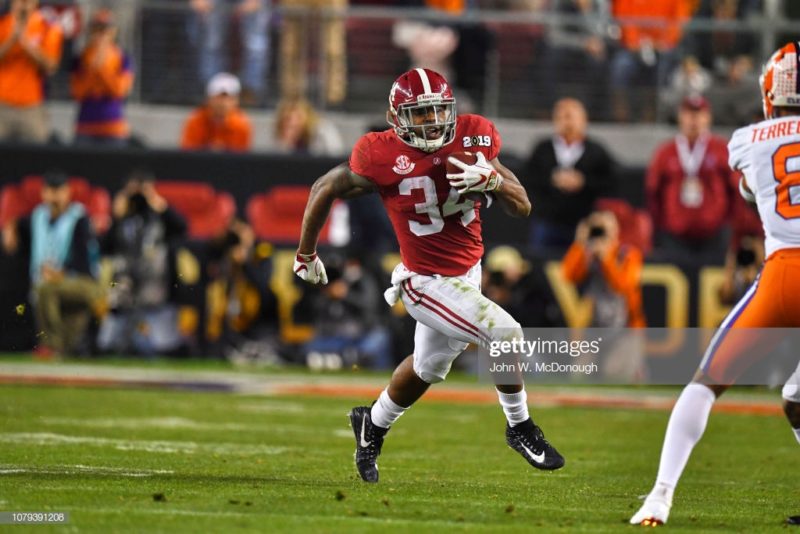 Damien Harris (#34) had about as successful a career as any Alabama running back in their history. His team played in 4 National Championship games, winning 2 and he led the team in rushing for 3 straight years despite averaging just over 10 touches per game for those 3 years.

He has good size and a strong build to handle the position. In Gap runs he showed good patience to tuck in behind his blockers and cut off of their leverage.  On inside Zone runs he displayed good patience and vision to find the right gap and has a good short area burst to get downhill. Similarly on outside Zone runs he shows the patience to press outside until the gap opens, squares up his shoulders and hits the hole quickly. He’s a north/south runner and doesn’t possess the lateral agility and quickness to make defenders miss behind the LOS or in space. He runs a bit high taking away from gaining yards after contact and doesn’t have a second gear to run away from defenders.

At Arkansas in 13 personnel. Notice the slight lean forward before the snap (he does this often when he’s getting the ball). With the inside gaps closed he shows off his vision making a solid cut to find the lane to the outside, lowers a shoulder to run over a Db and make and nice gain.

At Arkansas it’s a Zone run to the left where he’s patient and when he finds his gap you see his shoulders square to the LOS and accelerate downhill.

At LSU behind an interesting block that has the left tackle pulling right and the TE coming left to form a double team he uses good vision and one cut to get the big gainer.

Vs Georgia it’s an outside run to the right where he presses outside comes under control and gets downhill.

He was not used a lot in the passing game other than check down routes and an occasional screen. In the games watched I saw him run some angle routes and 2 way go but lacked urgency to get into his routes and didn’t separate in coverage.  Entering Zone coverages he often sets up too close to defenders limiting his opportunities. His hands were solid but there were some bobbles and he didn’t create a lot of yards after the catch on his own. When asked to Pass Protect he had good awareness to find the open rusher and work across formation but would turn and use a shoulder making him easy to dismiss. He didn’t use his hands or show aggressiveness at the POA.

At Arkansas this was probably his best rep as a receiver that I saw and take that however you like. He releases into the flat on a check down, catches the ball away from his body and turns up field quickly to avoid the first diving tackler to get 10 yards after the catch.

Vs Missouri this is an example of the lack of urgency getting into his route. It’s just kind of a jog with a casual turn. You want so see some level of quickness and effort to do his part even if the play isn’t designed to him.

Harris is a no frills, you get what you see, type of player.  There isn’t a lot of flash to his game, he doesn’t stand out in any area and doesn’t even do the little things that could help a team.  He’s a one cut downhill runner that doesn’t possess the lateral agility to make people miss. He comes from maybe the best program in the country and if you look around at running back rankings most places will have him high in the top 100 prospects. I feel that area would be for future starters or impacts players. I just don’t see it.  I’d expect him to make a roster as backup but I wouldn’t take him as high as others might.