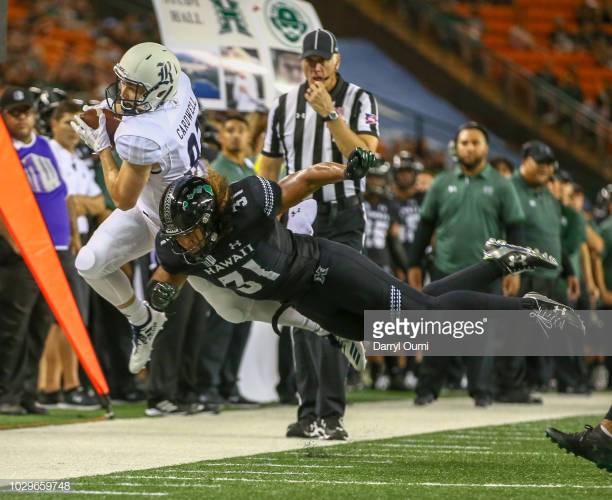 Jahlani Tavai is a fascinating case study of what a modern NFL ILB can look like if deprived of the elite functional athleticism that seems to be required from every three-down linebacker nowadays in the NFL. While Tavai certainly does not have athleticism of a sideline-to-sideline LB, his processing and elite short area burst make him mitigate that lack of true speed. Other than pure speed, Tavai is not a terrible athlete, in fact, laterally, I like the way he moves. His motor is never-ending, he plays like a complete alpha male, and he is always around the football no matter what is going on.

With a background in rugby, it is no shock that Tavai is an aggressive player and overly aggressive many times. But I would much rather be overly aggressive than timid, as Tavai gives the tenacity that you want from the leader of your defense. Tavai’s very odd in the fact that he was a hybrid. He played as an OLB and blitzed off as an EDGE at times and then played inside, similar to a guy like Kyle Van Noy and what he does with the Patriots. Tavai is a schematic versatile player that can do so much for your defense in packages. It is that type of stuff that makes Tavai such an enthralling player for NFL front offices.

It is plays like this that make Tavai such a fantastic processor and mitigate that lack of elite range. First off, his first step quickness is as impressive as anything here. Tavai is the first man off on Hawaii towards the near sideline. Great processing and he trusts his eyes, thus making him just fly downhill. Tavai might play aggressively, but he does let that get himself caught up in the trash. He sifts through it and avoids all of it with ease, as he does here. This is a picture perfect tackle for loss.

Perhaps Tavai doesn’t have great range, but you would think that a guy who does not have that elite range would not be able to range over to make this play. It is a rough angle at first for Tavai as he has to adjust himself halfway up the hash, but great processing to realize the flow of the offensive game plan here to the far sideline is why he can make this play. It is not that his athletic gifts are great, it is that his mental smarts coupled with just enough athletic ability allow him to save this from being a bigger gain than it should be. Great play.

There is no better play to show off his elite instincts and processing here. There is motion, decoys, false jets, and everything in here, but Tavai sticks his nose right up the line to the reverse to the far side because he realizes the flow of the offense and the weak side engagement that is likely to occur. Cheating down and flying right in here for a TFL is awesome stuff.

As for coverage, Tavai can do that much better than I thought he would with his athleticism. There’s a lot of clunkiness in his backpedal, and I am genuinely not sure how he will do in strict man coverage at the next level, but this play is very nice. It is an extremely fluid hip turn and he carries Josh Oliver right up the seam to perfection. He causes an incompletion due to it. Gorgeous play.

Jahlani Tavai might lack the traditional athleticism of a modern three-down LB, but his processing and quickness allow him to be just that at the next level. As possibly the biggest sleeper at ILB in the draft, Tavai will likely be higher on NFL radars because of his traits and what he brings to the table. Tavai should be a day one contributor on special teams and perhaps even a day one starter under the right circumstances due to his versatility.

Round Grade: 3rd Round

Tape Watched: vs Middle Tennessee, vs San Jose State, vs Wyoming, vs Navy, vs Rice