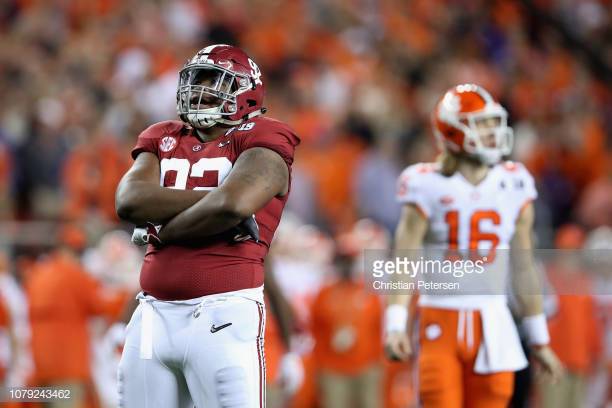 – Impressive motor with plenty of intensity
– Fast, powerful hands and arms that lock out blockers
– Quick feet with nice balance and flexibility
– Explosive off the ball
– Fires out low and maintains balance
– Moves up and down the line of scrimmage
– Excellent against the run, only good against the pass

– Only played in 24 games the two years at Alabama, due to redshirt freshman year
– Can get high and play beyond his pads when tired
– Small for his position
– If his hands don’t get him where he wants, Williams doesn’t have good counter measures

– 2018 Outland Trophy winner
– A unanimous first team All-American (Walter Camp, the FWAA, Associated Press, The Sporting News and the AFCA)
– In those 24 collegiate games, he had 55 solo tackles, 35 assists, 25 tackles for a loss of 90 yards, and nine sacks with 63 yards lost.
– Four star prospect by ESPN, rivals, scout, and 247sports.
– 2018 finalist for the Bronko Nagurski Trophy and Bednarik Award.

On a 3rd and 6 play early in the first quarter, Williams lines up almost heads up versus the right guard. At the snap, the defensive tackle extends his hands up while knocking the lineman back making the blocker’s right arm almost useless. #92 uses his powerful trunk to rush through the guard’s grip. He quickly finds the quarterback in the pocket and swallows him up, then violently tosses the signal caller to the ground with ease. It was a quick first step across the line, then a powerful punch and side step that made the o-lineman’s block futile. Then Williams simply clicks and closes for the big sack!

Lined up heads up on the left guard, #92 reads pass off the Bulldog three wide, two wingback shotgun formation. He quickly gets his arms into the blocker, knocking the blocker back off the snap. Williams dips underneath freeing one arm and extends it high to disrupt the passing lane, while trapping his other arm into the guard using his powerful lower body to move the Georgia lineman like he was a blocking sled. The quarterback dips back inside and sees an opening, while the defensive tackle spins himself free from the blocker. Williams doesn’t give up on the play and closes the gap to tackle the signal caller down for a minimal gain. It was his quickness, vision, and determination that changed a passing play into a chance to pummel the Georgia quarterback with little yardage gained.

On a 3rd and 2, he lines up almost helmet to helmet with the left guard. At the snap, Williams gets good low penetration. #92 extends his arms out keeping the blocker off his body as the back attempts to run off the guard’s butt. The defensive tackle frees his right arm while dipping down to grab and shoulder block the runner to the ground. Williams refused to be moved, reached out and made the tackle the only way he could.

Lined up between the center and left guard, Williams shoots low and swims through the gap at the snap of the pigskin. #92 immediately locates the ball carrier and ducks right past the two pulling linemen. He lassos the runner to the ground for a small loss. The defensive tackle processed the play in less than a second, exploited a crease, and wrapped up the runner before almost anyone else noticed.