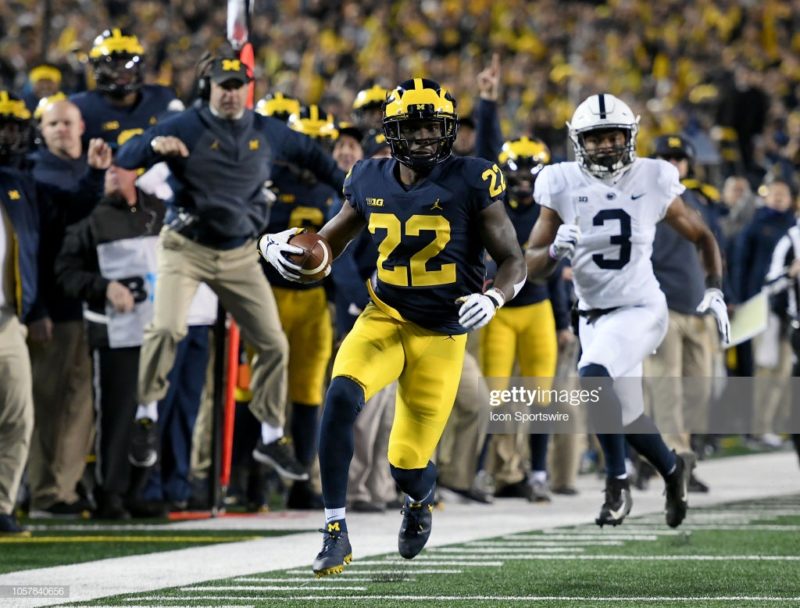 David Long (#22) put up some impressive speed and quickness numbers at the Combine making him deserving of a closer look. He was an interesting watch as most players you scout for the Draft, when you’re concentrating on just them, stand out on film.  Long doesn’t. Or does he? Depends on how you look at it I guess. He wasn’t tested often so he didn’t make a lot of plays. But because opposing QB’s didn’t target him often does that make him stand out more?

He doesn’t have ideal height coming in under 5’11” but that doesn’t stop him from getting in the face of every receiver at the LOS.  He played almost exclusively in Press Man coverage. He’s very patient and doesn’t fall for the fakes of the WR’s.  He’ll get a hand out to slow the receiver and flips his hips well to mirror and run with them on the deep outside routes or trailing crossing routes toward the far sideline.  He has plenty of speed to stay in phase and run on deeper routes and will use the sideline to his advantage. He was occasionally used in Zone coverage getting a bump on the receiver before passing him off and settling in his zone. There were too few opportunities to see him click and close on underneath routes and in the games watched I didn’t get to see him play in off Man coverage at all. He did get grabby at times when he felt he was beat.

At Maryland he’s wide to the top of the screen. He’s got Man coverage on his man underneath but reads the QB to come off him and cut off the pass in the end zone for an INT.

At Maryland the receiver D.J. Moore (#1) gives him a hesitation and outside release. He mirrors well, stays in phase and knocks the ball away.

At Notre Dame he at the bottom of the screen and it’s a little hard to see here but the WR fakes to the outside and cuts inside shoving Long and get separation on the inside route. The Irish receiver were very physical with him the whole game.

Vs Penn State he’s in Zone and tries to get a push on the outside WR to reroute him and as he settles he gets an INT off a tipped ball.

Vs Ohio State he moves to the slot following the WR. He trails the WR on the drive route, may grab the jersey just a bit and then makes a play on the ball. It goes through his hands but he continues to play the ball to force the incompletion.

Vs Ohio State at the top of the screen. The receiver gets behind him and he hooks the right arm and gets called for the DPI.

As you may have guessed by his tackling numbers run support isn’t really isn’t high on his list of things to do. Having only 37 tackles in his college career and just 17 in 2018 are telling for a couple of reasons.  Playing so much man and with his back to the action took him away from the running game often. But when given the chance to help in the run game he didn’t jump in there wholeheartedly.  He was more likely to try and take a wider angle to force a runner inside toward his teammates than try to do it himself. And he wasn’t very physical when he did get involved.  I mean, 17 tackles in a 13 game season is pretty hard to do.

At Maryland he’s lined up in the slot. It’s a pass out to the running back and he comes in to help. He makes some effort but doesn’t get the tackle on this one.

At Maryland this may have been the one true attempt to help on a running play that I saw. He’s not physical but he’s in there making some effort.

He’s very competitive on the outside and won’t back down from anyone out there but he doesn’t have the ideal size to play on the outside and will get pushed around by bigger receivers. He may fit better in the slot but his lack of activity in the run game doesn’t really fit that profile either.  He may be scheme specific as well with the arrow pointing toward a Man heavy scheme. Teams will need to determine if he can play facing the LOS from off the ball. The fact that he doesn’t get rattled at the LOS and ability to play Man is intriguing and if you don’t need him to support the run I think he could compete for the slot corner spot and be skilled enough to back up on the outside.