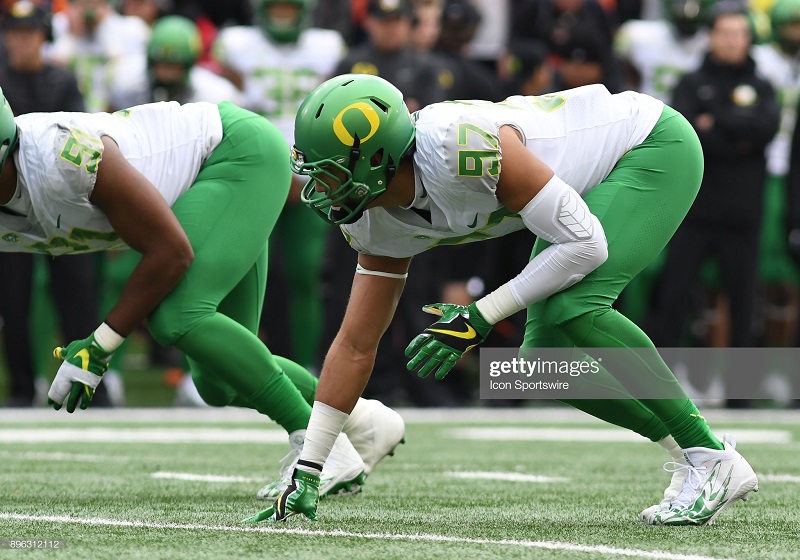 Jalen Jelks (#97) always seemed to be a name the popped up often when watching PAC-12 games. The long, lean defender seemed to be on the screen often but what does the tape say?

Right off the bat, he seemed to be playing out of position playing defensive end in a 3 man front usually reserved for players quite a bit heavier than him. He lined up in the 4i to 5 technique most of the time but played some inside and on the edge as well. To his credit he is a high effort player taking on heavier players on the inside and doing his best to do his job.

His stance is squatty, like he’s sitting on his heels. He gets his hands up quickly but doesn’t fire forward more upward while reading the play. He doesn’t have the play strength to succeed regularly in 1 on 1 situations allowing him to shed blockers or take on double teams on the inside. He’s a solid tackler able to get down ball carriers when he gets his hands on them and shows good pursuit chasing down the ball.

Vs Bowling Green he’s standing up on the left edge and uses a club to the inside to move the RT and stops the runner for no gain.

At Arizona State he’s over the RT and the defensive line is slanting left. He’s able to get inside of the RT and swing down the RB

At Arizona State he’s left unblocked but I liked his acceleration here once he sees the land and gets in the backfield quickly.

At California he’s the 5 tech on the right he tries to get in the C gap but the TE cuts him off and drives him 7 yards downfield.

On the edge it wasn’t very impressive either.  He’s a little quicker from a 2 point stance and likes to throw violent chops, slaps and clubs but doesn’t follow it with another move. He doesn’t create opportunities or put pressure on the OL. He doesn’t have the speed to threaten around the edge and I didn’t see flexibility to corner at the top of the arc. He would occasionally get under the OT’s pads and be able to bull him into the pocket.  It was quite lackluster all around. It the first game I watched because he had 3 sacks but those were generally where he got stopped at the LOS and chased down the QB after he left the pocket.

Vs Bowling Green vs the RT he starts wide and tries to yank him out of the way but doesn’t get much movement.

Vs Bowling Green he’s the 3 tech vs the RG. He clubs with the right arm and gets some push to the inside before stepping outside when the QB steps up to force the throw.

At Arizona vs the RT tackle he shows a solid punch to get him off balance and uses a long arm to the inside to get pressure.

Jelks looks like a project to me. Moving to the edge full time would be first place you try. His size and length fits nicely there but he would need to add play strength to take on blocks and develop a pass rush plan. The other option would be to make him a WLB allowing him to react and chase while having to deal with fewer blockers.  Either way I wouldn’t put him on my list of late round guys the Steelers should draft.