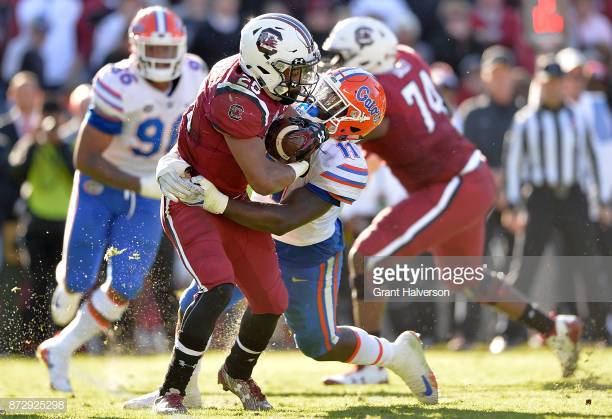 -Natural movement traits in space as a defender
-Gets up to full speed in a flash in pursuit; quick straight line speed
-Undercuts and slips blocks in traffic with quick, explosive movement
-Physical striker that loves contact and will let you know about it
-Flows well laterally for position
-Short area bursts are tantalizing
-Showed flashes of dominance against LSU in 2018

-Extremely slow to read and react to action at the line
-Plays with a high pad level and rarely attacks downhill naturally
-Tries to slip blocks far too often, rather than taking them on and maintaining gap; takes himself out of plays too often
-Takes poor angles in pursuit, forcing him into arm tackle situations
-Doesn’t have the ability to match up in coverage down the field due to lack of understand out route concepts

-Totaled 161 tackles, 14.0 tackles-for-loss, four sacks, eight pass breakups, one forced fumble and one fumble recovery during his career at Florida
-Played in 37 career games with the Gators, starting 22 games, including 11 starts in 2018; started 10 games in 2017 as an outside linebacker for Florida
-Didn’t start Charleston Southern game in 2018 due to team discipline
-Named Walter Camp National Defensive Player of the Week for his 14-tackle, two-sack performance Oct. 6 in the Gators’ 27-19 home win over LSU

Florida linebacker Vosean Joseph certainly looks the part of the modern NFL linebacker, but his play is so up and down on tape that it’s hard to truly get a good grasp on what he is as a player.

Honestly, he’s been one of the hardest evaluations I’ve done in my four years here with Steelers Depot. He certainly flashes quite a bit on tape with his speed and athleticism, but there are too many negative plays from him, especially in the missed tackles department, to really truly know what he is as a defender.

Fortunately for Joseph, he really came on strong down the stretch in 2018, closing out his career with the Gators with a strong performance in the Chick-Fil-A Bowl against Michigan. That game, along with his impressive showing against LSU, showed flashes of what he can develop into in the NFL with the right scheme and coaching.

But then there were times on tape he looked so incredibly lost in Florida’s defense and didn’t have a clue as to what was happening in front of him as a defender.

It seemed like he was guessing a lot early in the season, but he fortunately has the athleticism to correct those wrong guesses. But once he corrected it, he couldn’t finish the play and make the tackle.

Here against Kentucky early in the 2018 season, Joseph fires downhill to play the run from the Wildcats, but he gets faked out and realizes his mistake in a split second. That’s good for a linebacker that he’s able to recover this quickly, especially with this athleticism. But once he recovers he can’t finish the play, missing the tackle in space and allowing Benny Snell Jr. to pick up a big chunk of yardage after the miss.

Here against Georgia late in the season, Joseph does a great job of reading his keys quickly and slipping downhill against the run, undercutting the block from Georgia’s tight end to give himself a clean look at Elijah Holyfield in the backfield. Joseph can’t finish though, allowing Holyfield to spin out of the tackle attempt and pick up some yards outside.

Here’s in position to make these plays, he just has to finish. I’m not sure that can be taught at the next level. He certainly needs to get stronger, and he needs to work on his tackling form, but you can’t teach this athleticism and movement in space.

Tackling against South Carolina wasn’t much of a problem for Joseph, especially here. I like the way he’s able to stay clean in traffic while moving smoothly laterally, exploding underneath the lineman’s block to get a clean look on the Gamecocks’ running back. This is another arm tackle, but Joseph shows off the strength to wrangle the ball carrier to the ground here.

In coverage, Joseph is really good at reading what’s happening in front of him. Once Florida asked him to turn and run with a tight end or a running back, it became a nightmare.

Initially called to blitz here, Joseph has the awareness to break off of his blitz and blow up the screen pass, battling the lazy throw away with ease. You can clearly see his transition skills here and how he’s able to quickly switch from blitz to coverage mode with ease.

Against LSU at home, Joseph was a massive force for the Gators, flying all over the field against the run, recording a game-high 14 tackles, earning the Walter Camp National Defensive Player of the Week award for his performance.

I could have filled this entire article with clips of his from that game, but that game alone doesn’t tell the complete story of what Joseph is. It’s a good representative of what he can become in the NFL, but he has a long way to go to reach that level consistently.

His ability to flow laterally here really stresses the LSU lineman, who is trying to reach him at the second level on the stretch run. Joseph does a great job of reading his keys and firing downhill quickly, knifing behind the line of scrimmage to make the stop on Nick Brossette. LSU’s center really had no shot on this play.

When Joseph is engaged from the start and is given the space to roam free laterally, he’ll find himself around the ball consistently. What he can’t be asked to do, at least right now, is to read and react from the middle in a 3-4 or 4-3 scheme, simply because he really struggles to read his keys quickly enough, and has a hard time getting off of blocks inside.

He seems best suited for a weakside role in a 4-3, where he can utilize his speed and athleticism to chase down plays, especially early in his career. He’s worth taking a chance on in the draft, but I personally wouldn’t pounce on him until Day 3, preferably late in the fourth round. That being said, I do think he goes Mid-to-Late Day 2, largely due to his speed and athleticism.