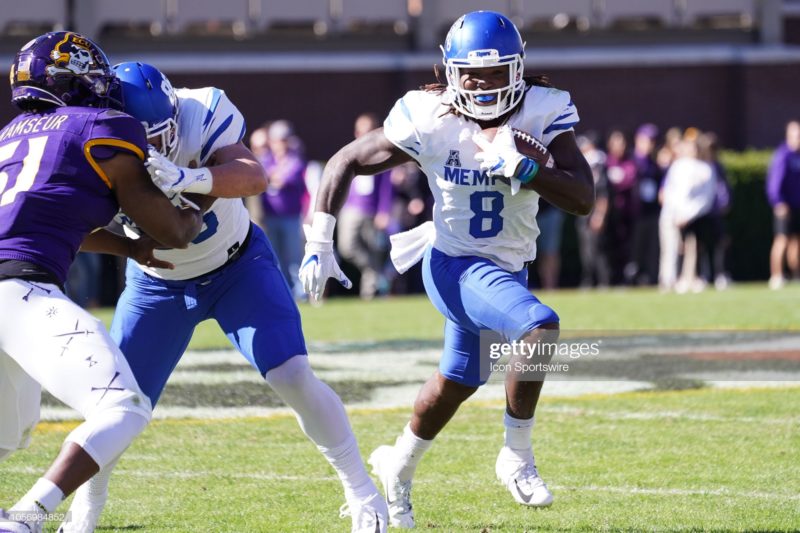 Regardless of whether you feel Jaylen Samuels can handle the load if James Connor goes down (I don’t) the Steelers will need someone to fill out the RB room. This draft has quite a few options to use one of the current 10 draft picks to bring in someone to compete for the #2 role.

Looking at the numbers Darrell Henderson (#8) put up the last few years at Memphis will definitely catch your eye.  With over 2,200 yards from scrimmage, nearly 9 yards per carry and 25 touchdowns as part of a rotation where he averaged about 18 touches per game.

He was used in Gap/Power and Zone running schemes, inside and out. He’s not big in size but he is thick. In Gap/Power scheme the ran a lot leads and counters inside where he used his size to his advantage and is very comfortable tucking behind a puller, putting a hand in their back and cutting off of their leverage. On inside Zone runs he was solid but you’d like to see him be a tad more patient and uses his vision to find the best gap. On outside runs, he was used on stretch, sweeps and outside Zone runs.  He is better at gap decisions to the outside and showed enough speed to get the edge. I felt his COD moving laterally was just solid behind the LOS. He’ll take a few steps to gather himself before he makes his cut but that may be a result of confidence in his decision rather than athletic ability.

Vs UCLA the first play I watched he tucks in behind the pulling LG, cuts inside of his leverage, squares up and bounces off a tackle, shows his vision in open space, the acceleration between 4 defenders and uses his blocker on and 80 yard gain. That’s a good start.

At Navy here is a pair of inside runs. On the first it’s a draw up the middle where he puts his head down into a group at the seven and drives to finish at the 2. The very next play, you’d like to see a little more patience here as he runs into the back of the pile but stays upright through the contact to get the TD

Vs Houston on a lead he follows the fullback stays on his feet through the line, gathers and drops a shoulder into the safety to finish off the run.

When he makes his gap choice he gets after it accelerating quickly to get to the second level. Here his vision gets even better in space. He sees one step ahead able to see the open areas and can make quick cuts to avoid or drop his shoulder to run through a tackler. He has an extra gear to run away from defenders who seemingly have good angles making it tough for defenders on the third level. He uses his blockers well and has homerun ability with 13 of his 25 TD’s last season coming from 40 yards or more. And he’s a willing blocker for his teammates, not afraid to lead inside or outside.

At Tulsa he’s a lead blocker here using good leverage to stick a shoulder into the LB and keep him out of the play.

At Navy a Zone run to the left he make a good cut up field showing good body control and ankle flexion, gets to the second level and the vision kicks in to take him back across the field, gets some really good blocks, and takes it to the house.

Vs Houston a run outside right he shows the speed to not only run away from the LB’s angle but then beat the other defenders to the edge for a good gain.

In the passing game he was used mostly on flat routes, screens and wheel routes from the backfield and would occasionally be split wide for smoke screens or in the slot to get him on a go route.  He really accelerates on his wheel routes to put pressure on the coverage immediately. He catches the ball naturally away from his body and squares up field quickly.  He didn’t produce a lot after the catch in the games I watched but his 15.5 yards per catch would indicate differently. Their scheme didn’t ask him to Pass Protect often. In the 5 games I saw 1 rep where he squared up with a good base and hands against a rusher but for the most part their passes were away so quickly he didn’t need to block.

Vs Houston he’s split out to the left on a screen he doesn’t create a lot, makes a couple nice cuts to get a few yards, but you can see the comfort catching the ball.

Vs Central Florida from the backfield this route out of the back field shows good body control and ability to adjust to make a tough catch.

Henderson has shown playmaking ability at the collegiate level but will that continue in the NFL where the holes are smaller and the speed is faster? Time will tell but he can fit in Gap/Power or Zone running schemes and can catch the ball.  I don’t think he’ll be a lead back but he doesn’t need to be. Get him 15 touches a game on offense and he has experience returning kicks so he can be used there as well.  I don’t think the Steelers will use a higher pick on a RB but stranger things have happened.