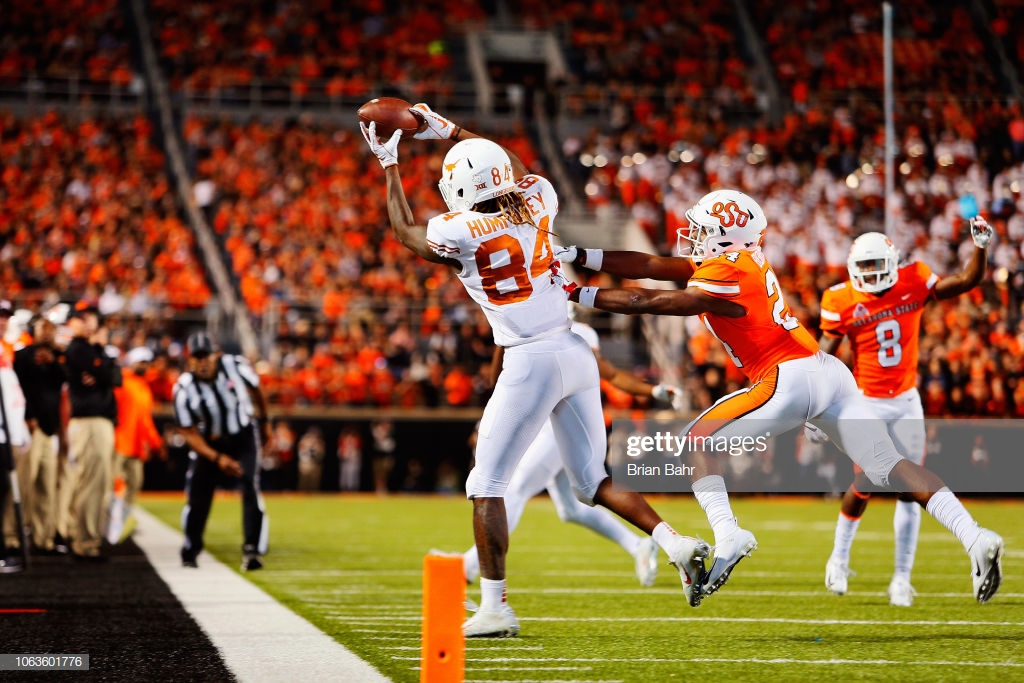 When it comes to Texas wide receiver Lil’Jordan Humphrey, there is not much that is little about him. He has a big frame at 6’3 and 210 pounds and is coming off a big year as a Longhorn. Humphrey finished with 86 receptions for 1176 yards and nine touchdowns. He finished with the third most receiving yards in Texas history and had the second most receptions in the Big-12. What is surprising is that Humphrey has done most of his damage from the slot, not a usual position you would expect to find a 6’3 wide receiver.

With his size and frame, the Texas receiver does not fit the typical mold of a slot receiver. He is not athletically superior in quickness, speed or agility but more often the NFL is beginning to implement bigger targets in the slot, perhaps to take advantage of the mismatch as slot corners tend to be smaller and faster (such as Mike Hilton). Humphrey is that guy but besides his physical traits, he is also great at understanding coverages and finding the soft spot in the zone. Slot receivers are typically the quarterback’s security blanket as they are tasked at getting open or sitting in the open zone. Humphrey did both of those tasks quite well, recognizing the depth and spacing in the coverage.

On to his physical traits now, Humphrey brings a lot to the table. He is a contested catch winner, especially against typically smaller slot cornerbacks. He was able to out battle his opposition and bail his quarterback out numerous times. The Texas receiver has a large catch radius which he consistently flashes and can climb the ladder to high point the football. It looks like Humphrey has gained adequate separation on the play above, though the throw is way behind him. That is no problem though as he controls his body, climbs the ladder and comes down with a big catch.

Now being 6’3, 210 pounds and quite raw at the position, there is a fair concern over Humphrey’s route running ability. He has not been able to consistently show that he can get separation as his size and frame does limit him quite a bit but there is room for optimism. Humphrey is in the slot and while he may never win with quickness, he can win with deception. A fake inside jab step along with a head nod gets the defensive back to bite which gives Humphrey more than enough separation to the sideline. The ball does not go to him but if it did, it would be a definite touchdown. The biggest question mark is how Humphrey will transition against top of the line NFL cornerbacks who will have faster recovery speed.

Humphrey can also play on the outside though he may surprisingly be better suited for the inside where he can take advantage of smaller competition. On the outside, the Texas wide receiver will solely win with his ability to outmuscle his competition. On the play above, he shows good ability to shield his body and climb the ladder for the touchdown. Again, I have my questions on how well Humphrey will be able to use this advantage in the NFL, especially on the outside as he battles a team’s #1 or #2 cornerback.

The biggest obvious problem that presents itself on Humphrey’s tape are his hands. While they are the subject of a highlight reel grab one play, they could easily be the subject of an embarrassing drop the next. Perhaps because Humphrey only transitioned from running back to wide receiver a few years ago, his hands are still raw. Still, if you were to bet on the probability of a catch or a drop, eight times out of ten, it is a catch.

Like a lot of receivers in this year’s draft, Humphrey could be lumped into the category of big-tall possession receivers who may struggle to gain separation at the next level. While that is a fair assessment, Humphrey’s ability to play in the slot while coming with mismatch potential while showing some promise in his route running gives him a higher ceiling than the rest.

Games Watched: vs TCU, vs West Virginia, vs Maryland