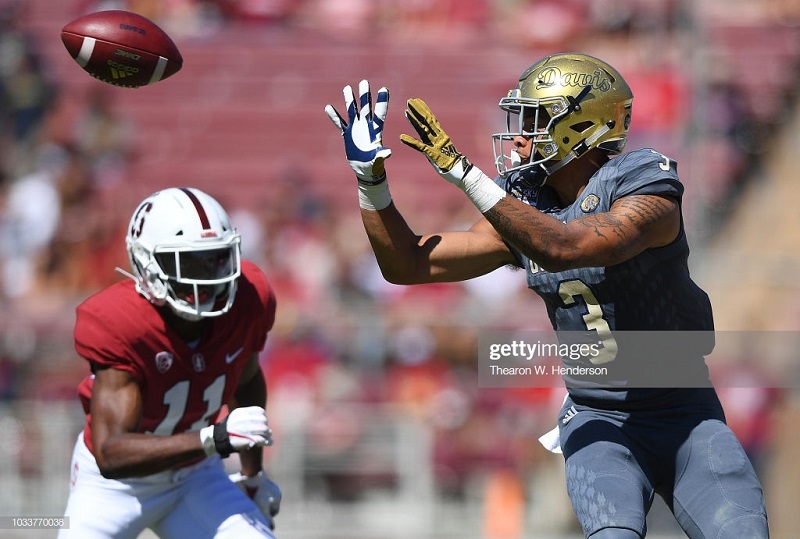 Here is another FCS player that has gotten some notice in this draft and an invite to the Senior Bowl. Keelan Doss (#3) has been very productive in his time in college and when looking at FCS players you want to see them be dominant. And he has shown he can play on the level with higher caliber players. Over the past 3 years in games against Oregon (7 receptions for 116 yards), San Diego State (8 for 181, 1 TD) and Stanford (13 for 106) he compiled good numbers.

As a receiver he was used on the outside, in the slot and even on the wing. He lines up with his feet angled to the outside. Now that could be something he was taught but he straightens them before accelerating fixing that would save valuable time. His acceleration is solid of the LOS and isn’t explosive but uses long strides to eat up space on off defenders.  He has very good body control when stemming from his releases able to drop his hips and work back toward the LOS, use body movements to manipulate and get defenders to turn or using short area quickness to get into his breaks. He was used all throughout the route tree and is shows very good awareness in Zone to find the open area and give his QB a good target. Vs Press he showed improvement in his hand usage to keep defenders off of his body.

At Oregon lined up wide left he runs a post pattern. And he shows good strength to deal with the DB tugging on his jersey and ability to adjust for the ball.

At San Diego State this is also a post pattern from a wide left alignment. On this rep he high points the ball and come down with the catch in the middle of the field

At San Diego State he’s wide right and takes a WR screen. He catches the ball away from his body and uses blocks and shows enough speed to get the TD

Vs Stanford lined up wide right he gets in between the levels of the Zone coverage and settles. He makes the catch with defenders bearing down on him and gets his feet inbounds.

At the Senior Bowl from a tight split to the left he shows a move to the outside, turning his head and shoulders completely, to get the DB to jump outside leaving him wide open.

He has good hands able to pluck the ball away from his body and a good ability to adjust around his frame. He has good body control to go up and high point the ball and makes the tough catch but there were some drops in contested situations he probably should have handled. After the catch he looks to create but lacks elusiveness and explosiveness to be a force after the catch. His long speed his solid but doesn’t have the extra gear to overtake DB consistently on the deep ball. He needs to improve working against physical defenders along the sideline, on deeper routes, so he isn’t redirected out of bounds. He’s a willing blocker who looks to help clear space for teammates but needs to clean up his technique to stay balanced.

Doss has good size, hands and route running ability. His value lies in his ability to get open in the short and intermediate areas vs Man or Zone coverage.  He doesn’t possess the long speed to win consistently over the top or the elusiveness to be a threat on every play after the catch. He has the look of a possession WR likely from the slot that can help in the red zone.