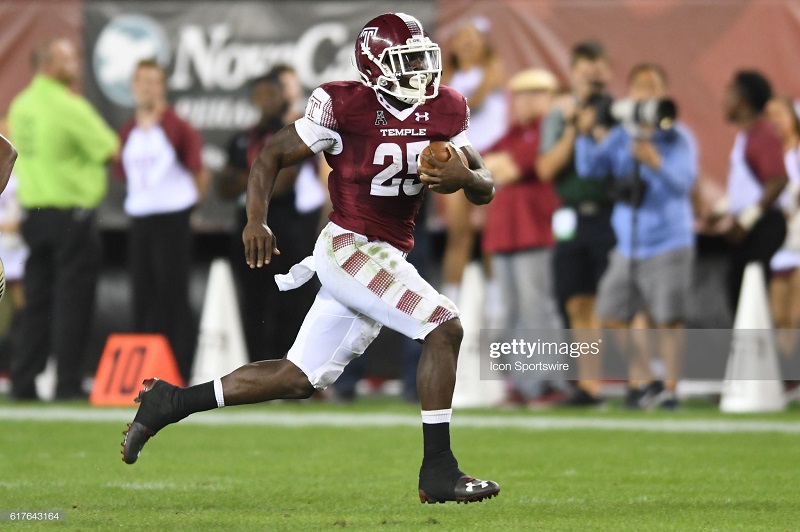 Temple running back Ryquell Armstead is a violent runner who puts the pedal to the metal. His running style makes him one of the easiest running backs to take a liking to from this year’s draft class as his physicality and quick footwork form a lethal combo. Armstead is a four-year contributor and finished with 1098 rushing yards and 13 touchdowns last season. His 34 career rushing touchdowns are the third most in Temple’s history while his 2812 rushing yards are the fourth most in school history.

Armstead’s 5’11, 220 lb frame make him an incredibly difficult target to tackle. Arm tackles and attempting to drop a shoulder are useless when trying to take down the Temple running back. Equipped with incredible contact balance, Armstead is capable of creating a lot of yards after contact. There are two plays above, with the running back completely running through a tackle attempt on the first play and running through two tackle attempts on the second play. Armstead consistently falls forward and keeps his feet moving through contact, giving him the ability to steamroll over defenders.

What makes Armstead stand out from other running backs is his nimble feet. For a 220 lb running back, Armstead has lightning quick feet, capable of changing direction effortlessly. Watch on the play above as he swifts through the defense with ease before once again falling forward for a first down. The Temple running back really excels in a zone blocking scheme, which would likely be his best fit at the next level.

Armstead plays with a lot of urgency. He hits the line of scrimmage fast and with authority. Combine that with his quick footwork and you get a running back that is capable of not only hitting the line quick but also with the ability to bait a defense. That is exactly what goes on above, as Armstead presses the line of scrimmage quickly, drawing in the Boston College defense back before side stepping outside and picks up about seven yards.

If you are not in love yet, please take a look at the play above. Armstead is a gifted player with the athleticism and football IQ necessary to command the running back position. He is a cutback runner, who understands how to use the flow of the defense against themselves. Watch on the play above as Armstead drifts to the sideline, drawing in the Maryland defense before showcasing his quick footwork. He turns upfield and gets skinny through the junk of the defense.

Though a lot can be said about Armstead’s lack of patience when running up the middle, sometimes it results in plays like this. Watch the Temple running back run right through his own offensive lineman for a big gain. While there is no doubting Armstead’s physicality, one can wonder if he would be better suited to play with more patience at the next level. On a few occasions, the running back simply plows into the pile if no hole presents itself.

Armstead’s potential to be a three down back still leaves room for growth. The running back is a tough watch in pass protection as he struggles to get his feet set or anchor correctly. The play above is perhaps the worst out of all his tape as he whiffs completely on a block. Perhaps some technique and coaching could polish up his pass protection as Armstead certainly has the size to pass protect. As a receiver, he is extremely limited with most of his work coming on swing passes from the backfield. He has been split out wide or in the slot though he has not really been a factor there.

There certainly is a very high ceiling on Armstead’s ability. I could have easily included another five plays showcasing his spin move, physicality and straight-line speed. Armstead is tough nosed runner equipped with elite footwork for his size. Throw him into a zone blocking scheme and reap the rewards. If he can polish up his third down duties, the sky is the limit for Armstead’s potential.

Games Watched: vs Boston College, vs Maryland, vs UCF