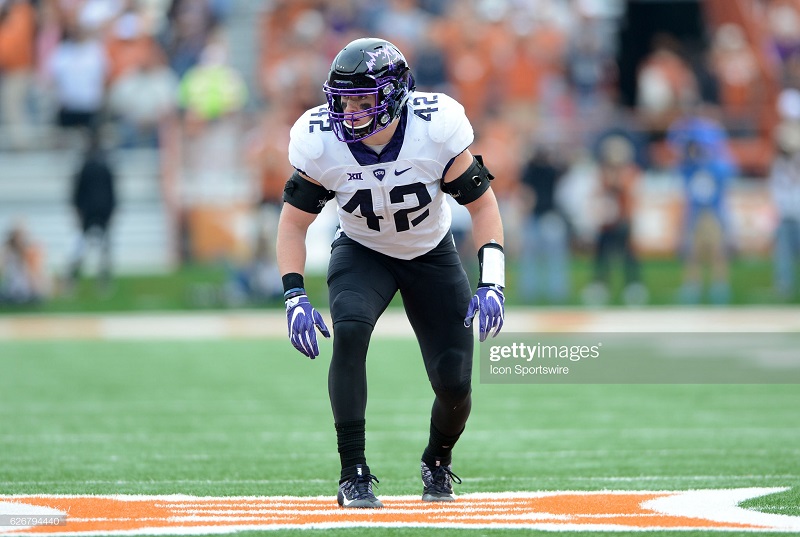 Linebacker is a positon of need and while it’s expected that the Steelers take one early it may be a position they double dip on if they keep all off their picks. A key component in the modern day linebacker is the ability to cover in the passing game and for Ty Summers (#42) that may be his strongest trait. His teammates Ben Banogu and L.J. Collier are getting most of the pre-draft attention but there could be a fit for Summers in the NFL. He fits the positon having good size and speed and was a 3 down linebacker.

Against the run, his mental processing can be slow, but it did improve year over year.  He is benefited by his athleticism to help make up for this. When he reads the play quickly like on power runs or outside zone he looks pretty good. He’ll fill gaps taking on OL to plug holes and he has the acceleration to get through gaps to make tackles in the backfield. When he processes slowly, he doesn’t attack the play downhill, allowing OL to come to him and he currently lacks the hand usage to keep OL off of him. He relies often on his ability to duck around blockers and he has some success but it also takes him out of position. He’s generally a good tackler, wraps up from the waist down and gets ball carriers down. I’d like to see him improve driving through ball carriers reducing the chance to slip off.  He plays sideline to sideline and he doesn’t look like he has 4.51 speed but can get outside and shows good pursuit.

At Texas he’s lined up on the right edge and shows that acceleration to get down the LOS and make the TFL.

Vs Baylor he’s the LILB you see him come up and take on the pulling OL with his inside shoulder to get into the running lane and make the tackle.

Vs Oklahoma he shows nice rage here going from the right hash to the far sideline to make the tackle. He doesn’t look like he’s fast but he makes up some ground here.

Vs Oklahoma I think he is reading the OC folding to the outside and that causes him to react to the right. Then he tries to duck under the RG losing site of the RB. At the very least if he stays square and takes on the block he may have a chance at making a play.

Against the pass, I was actually really impressed with his game.  In Zone he has a good understanding of route combinations and knows when to pass them off through his zone and where to pick up the next. He reads the QB’s eyes well and flows with his vision and can close receivers quickly. In Man coverage he can handle RB out of the backfield or TE from the LOS and cover them in the short and intermediate areas and can run with them on deeper routes. He’ll play trail Man and read the receiver and shows a very good acceleration to get into the passing lanes. They even had him on big slot WR’s covering in the short area and he did a solid job.

At Texas he’s in Man coverage on the slot. He plays back to the QB, eyes on the WR. When the WR makes his break outside you see him close the distance and get a hand in to break it up.

Vs Baylor he’s in Zone in the middle picks up the WR on the crossing route and makes the quick stop.

Vs Baylor he is the RILB and reads pass. He sprints toward the WR on the outside and you see his eyes on him. When the WR breaks he gets his head around and breaks outside on the same angle underneath the WR to get the INT.

Vs Baylor, here is a similar play to the other side. Sprinting back, reading the WR and getting into the passing lane.

Vs Iowa State he’s lined up left with coverage on the slot Hakeem Butler (#18). He’s able to stay in tight coverage and ensure the incompletion. They ran this a few times for short gains with him slipping off Butler once.

He wasn’t used often to rush the passer so he’s a bit of an unknown there. Three of his sacks I saw were coverage sacks where he ran down the QB and one other was an unblocked blitz from the right edge where he was looking like he was going to cover the slot. With his speed and ability to accelerate I think he could become an effective zone blitzer.

At Texas Tech here is the blitz off the edge. Good timing and acceleration to get the sack.

Vs California you see him communicating pre snap and it looks like he has the RB in coverage. When he doesn’t release he rushes, sidesteps the RB and brings down the QB.

Overall, there are good abilities you can use.  I really like his coverage skills. His awareness in Zone and ability to read and close on routes impressed me and he showed plenty of confidence and ability in Man. Imaging having an actual linebacker as your dimebacker who can cover and blitz. The processing of the running game can be improved with the right coaching. At the very least I think this is a guy who could play on all four of your special teams units. And maybe in a couple years he could develop into a full time MLB or WLB.